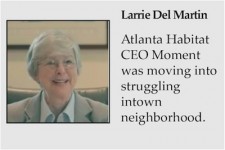 President and CEO of Atlanta Habitat, Larrie Del Martin, had her Moment in 1972 when she and her husband Joe decided to live in and contribute to what was then a struggling intown neighborhood for the sake of community rather than an easier lifestyle.

When the young couple moved back to Atlanta from Boston 40 years ago, it sparked a tough choice that many young couples face today: buying a larger house in the suburbs with longer commutes or dig into a transitional intown neighborhood that was viewed skeptically by friends and family.

At the time Larrie Del and her husband were making this decision, intown Atlanta was struggling. A desegregation lawsuit was negatively affecting the schools, and the Georgia Department of Transportation was bulldozing houses and trees in Inman Park and Virginia-Highland to build Interstate 485 towards Stone Mountain. Families were fleeing and property values were sinking.

“It would have been very easy to say ‘we’ll just go out where everything is beautiful and new,’” Larrie Del said. Instead, the couple settled in one of the intown neighborhoods struggling at the time, Morningside.

“We purposefully decided, ‘this is where we want to be, this is going to be our downtown community and we are going to make a difference,” she said. “That was who we were – we didn’t ever take the easy road. We didn’t know how hard it would be, but it was the right thing.”

The couple didn’t know a soul in their area just off North Highland and Johnson roads, but they found a house at a price they could afford, even though it would need a lot dedication and do-it-yourself work. “We didn’t have any money. I learned how to do everything – learned how to swing a hammer and put up sheet rock,” she said.

Scattered amidst the 50 to 100 boarded-up houses in the neighborhood, there were other residents with the same mindset of Larrie Del and Joe. “I kind of call us the first pioneers – we really began to work.”

Larrie Del and a fellow pioneer – a woman across the street who had also been renovating her house herself – started talking one day and struck upon an idea to start their own renovations business.

“We thought, ‘We are pretty good, we really want these boarded-up or run-down houses to look nice, why don’t we just start trying to get a hold of them and fix them up? We were the only women at the lumberyards buying and making sure the boards were straight – but it was a really wonderful time because we were changing the neighborhood house by house.”
The two women completed the majority of the work themselves which gave them flexible schedules to spend time with their family and be involved in other community projects. The flexible schedule allowed Larrie Del to lend her time to another aspect vital to the success of the neighborhood – the schools.

“The teachers were sorely in need of parents that didn’t work full time,” she said. “It didn’t matter what the job, you just had to get it done.”

Over time, intown residents successfully fought 485 and stopped the widespread destruction at what is today John Howell Park on Virginia Avenue, named for one of the leaders of the neighborhood resistance. Their efforts led to the establishment of the neighborhood planning unit (NPU) system in Atlanta. As Larrie Del and her partner completed renovations of the homes in their neighborhood just north of Virginia-Highland – coupled with improvements to the public school system –young families began to invest again in Morningside. The streets that had numerous boarded-up houses and vagrants were again filling with young families enlivening the area just as Larrie Del and Joe had done years before.

“All of those things just led me, my entire family, to stay with the public schools, stay with the neighborhoods, build relationships with neighboring communities and make a difference.”

Joe served for 20 years on the Atlanta Board of Education. The relationships Larrie Del built in the community led her to Atlanta Habitat. “Somebody called and said, ‘there is an opening at Atlanta Habitat and it has your name all over it.’ ”

She applied and got the job as Director of Operations in 1997, although she didn’t stay in that position long. “To this day, I say I would have been good at that job, but one thing led to another, the Executive Director moved on and I came into this position and now I’m the President and CEO – who would have ever thought that would happen?”

Through Atlanta Habitat, Larrie Del continues to revitalize communities as she did when she first moved into Morningside. Atlanta Habitat is one of the largest of the 1,500 affiliates of Habitat for Humanity in the United States and since its founding in 1983, the nonprofit and its legion of volunteers and partner companies have built more than 1,200 homes.
The volunteer labor enables each of the homeowners to save $35,000 to $40,000 on the cost of their home. And the no-interest loan provided by Atlanta Habitat is invaluable. However, the organization does much more than provide homeowners with quality, affordable housing – it instills the knowledge and self confidence each of them need to be successful.

Atlanta Habitat homeowners are required to provide 250 sweat-equity hours into building their home and others in addition to completing education courses and counseling. From the time a family applies for a home until their mortgage is paid off, Atlanta Habitat maintains a relationship with them.

This relationship gives homeowners the connections they need to take root in a community and strengthen it with their involvement – just as Larrie Del did in Morningside.

“It’s a very stressful job, but it is very rewarding – you see the community here,” she said. “We have homeowners who went to high school with my children, and we have volunteers that come from all walks of life. For me, it is a very special place.”

Larrie Del and her staff work hard to instill their commitment to community in Atlanta Habitat homeowners. Their work repays them in unexpected ways.

‘I just think we go through life and we don’t know why things happened the way they do.” She said. “I always took any job that I thought needed to be done. At the end of the day, all of those different stair steps helped me develop skills that led me coming to Habitat – which is the right job for me.”

Today, Larrie Del and Joe are still in the same house in Morningside that they chose as their home in 1972. In a few months, Atlanta Habitat will move into new, larger and permanent headquarters down the street from their current Memorial Drive home. Renovations should be well-managed.

Next week in Moments: Kevin Rathbun, an Iron Chef who found tears flowing before an important Moment.