By Maria Saporta
As published in the Atlanta Business Chronicle on March 25, 2016

John Imlay, the late Atlanta technology giant and philanthropist, passed away suddenly from a heart attack a year ago on March 25. But Imlay, who was larger than life when he was alive, will live on through a much more robust family foundation.

In anticipation of its increased role, the Imlay Foundation is naming its first outside executive director – Rob Smulian, previously vice president of philanthropy for the Community Foundation for Greater Atlanta.

“John’s passing caused the foundation to grow and more than double,” said Mary Ellen Imlay, his widow who succeeded her husband as chair of the foundation. Before she married John Imlay, she had run the foundation for many years. “We’ve been operating for about 25 years, but now this is a whole new level. I felt it was just the right time to bring in someone to lead it.” 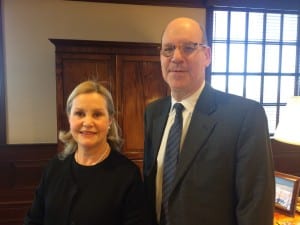 Less than a month after Imlay had passed, Mrs. Imlay told the board they needed to go outside to hire an executive director. A search committee was formed and Sam Pettway of BoardWalk Consulting was hired. He vetted 130 candidates, and they interviewed six before selecting Smulian.

“We decided Rob was definitely the person we wanted to be with us,” Mrs. Imlay said. “We valued his experience with family foundations and entrepreneurial organizations.”

Alicia Philipp, president of the Community Foundation, called it a perfect fit. “Rob brings with him not only his skills, but he knows how a good foundation is run,” she said. “He also has run businesses.” The Imlay Foundation offers a blend of both.

Before Imlay passed, the foundation had a corpus of about $20 million and has been giving about a $1 million a year. Its special focus area has been on smaller, entrepreneurial nonprofits, even though it also gives to major Atlanta campaigns, such as the Zoo and Georgia Tech.

Imlay also was a minority owner of the Atlanta Falcons, and he helped orchestrate the team’s sale from the family of Rankin Smith to current owner Arthur Blank.

“Our corpus is now $52 million,” Mary Ellen Imlay said. “The giving will be about $2 million a year. But we can do whatever we want. When the board gets excited about something, we can put our resources behind it.”

The goal, however, will be to continue as an endowed Foundation so that it will be here for years to come. “We are not interested in closing our doors at the Imlay Foundation,” Mrs. Imlay said. 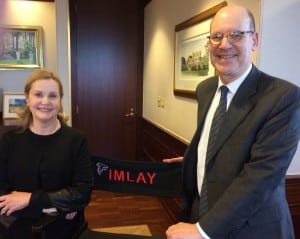 The 11-member board is made of members of the Imlay family as well as close associates, who all are involved in preparing for board meetings to decide on grants.

“I love that they have homework,” said Smulian, in an interview on March 22 with Mary Ellen Imlay. “Everybody has an assignment. I have worked with families over the last 10 years at the Community Foundation. It will be wonderful to do a deep dive on how to continue John’s legacy.”

Smulian, who will begin working full-time for the Imlay Foundation on July 1, has a history working with entrepreneurial businesses, family foundations as well as arts and environmental groups. Before joining the Community Foundation in 2006, Smulian served as executive director of the Atlanta Contemporary Arts Center; vice president of the Georgia Conservancy; and president of TrimbleHouse Corp., a privately-owned manufacturer of custom commercial and industrial lighting.

“I see this as a really exciting opportunity. I love the focus of the foundation,” said Smulian, 59, who said it came at the right time in his life.

In 2007, the future of Grady Hospital was in doubt. But on March 19 at the Grady Health Foundation’s White Coat Gala, Atlanta civic leaders thanked all the people who had rallied together in the past decade to save the hospital and show saving Grady had saved so many others.

The evening was capped with a surprise presentation of the Grady Legacy Award to A.D. “Pete” Correll, chair of the Grady Memorial Health Corp. and chairman emeritus of Georgia-Pacific.

Correll, former Cousins Properties Inc. CEO Tom Bell and builder Michael Russell formed a partnership to save the hospital, which serves the indigent, helping raise hundreds of millions of dollars for the institution. All were present at Saturday night’s surprise.

Correll said that when he became chair of Grady’s board, “I said ‘I just want to know what the heck is going on,’ ” said Correll, adding half-jokingly, “I had no idea this was going to happen, so it’s time to retire.”

Correll actually will be stepping down from the Grady board in September, and he will be succeeded by Frank Blake, retired CEO of The Home Depot. At the most recent annual meeting of the board, Russell, Bell and Pam Stephenson rotated off the board – opening the door for a new generation of leaders.

Joining the board are Carol Tomé, CFO of the Home Depot; James Dallas, chief information officer of Georgia- Pacific; and attorney Jack Hardin, according to Grady CEO John Haupert.

“Remember I’m still here,” Correll said. “I’m on the right side of the grass. You are not through with me yet. I hope to continue serving on the foundation.”

When he had his own health challenges and underwent treatment at Emory Hospital, Correll said, “Grady saved my life while I was saving Grady,” adding that he has received more credit than he should because so many people were involved in the effort.

“No one deserves to be recognized for protecting Grady’s legacy more than Pete Correll,” said Renay Blumenthal, president of the Grady Health Foundation. “He and his wife Ada Lee have given an enormous amount of time, financial resources and personal commitment to our hospital, our staff and our patients. They literally helped save this hospital and, as a result, are responsible for saving lives each and every day.”

Co-chairing the Gala were Carol and Ramon Tomé, and Ernest and Patrice Greer. Ernest Greer, a top executive at the Greenberg Traurig law firm, opened up describing the night in December when his older brother, José, jumped out of his third-floor Atlanta apartment to escape home invaders, breaking many bones and causing internal injuries. He was taken to Grady, and later died. “It did not matter he was black, nor would it have mattered if he were white, male, female, rich or poor,” Greer said of the first-class treatment his brother received. “No words can adequately describe what was going through my mind. One word has stayed with me – compassion. They showed no wavering of compassion for my brother, my mother and the family. This compassion went well beyond everything,” Greer continued. “While every medical option was explored, …he passed away. I’m so glad the business community chose to save Grady.”