By the end of the third day visiting Baltimore, Washington, D.C., and Arlington, Va., on the 2012 LINK trip, the delegation of 110 Atlanta leaders had one rallying cry: The future of the Atlanta region depends on the passage of the 1 percent regional transportation sales tax on July 31.

Atlanta Mayor Kasim Reed summed it up this way — if the 10-county sales tax doesn’t pass, it will be “the biggest challenge to our continued advancement as a region.”

Even outsiders were telling metro leaders they needed to invest in Atlanta’s transportation infrastructure. 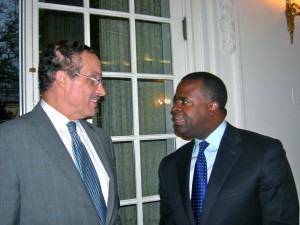 Washington, D.C. Mayor Vincent Gray with Atlanta Mayor Kasim Reed at the LINK dinner held at the National Society of the Daughters of the American Revolution (Photos by Maria Saporta)

Chris Leinberger, a developer who is a senior adviser for the Brookings Institution, gave his own Top 10 list for the Atlanta region. The first five were to pass the regional transportation sales tax.

That advice fell on welcoming ears.

“If we don’t pass this, we don’t need to go on another LINK trip,” said Sam Williams, president of the Metro Atlanta Chamber, during the wrap-up session on April 20. “We should just go to a funeral.”

Dana Lemon, a board member of the Georgia Department of Transportation who is in the funeral home business, chimed in: “There’s nothing wrong with a great funeral.”

After that brief moment of levity, the tone became increasingly serious.

Bucky Johnson, mayor of the city of Norcross who had chaired the Atlanta Regional Transportation Roundtable that developed the list of projects that will be on the July 31 referendum, said he was a “little disappointed” in the LINK trip. In addition to learning about the host city, he said the trip should have focused on “what we can do between now and July 31 to make sure voters are educated.” 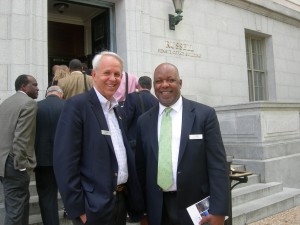 Richard Odom, chairman of Rockdale County, outlined one challenge by saying the tax would have a hard time passing without support from South DeKalb. But because the transportation project list did not include enough money to extend the MARTA rail line along the Interstate 20 east corridor, support for the tax in South DeKalb has been lacking.

Georgia House Minority Leader Stacey Abrams, D-Atlanta-DeKalb, told the LINK delegation that she had voted against the bill, but now she is supporting it because “it’s the best we have.”

But her constituents in DeKalb aren’t convinced.

“You guys are not giving me any help,” Abrams said. “There’s capacity to turn this thing around.” 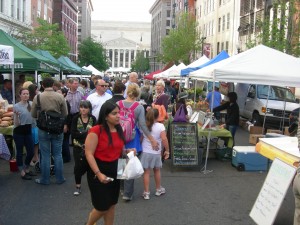 A downtown street in Washington, D.C. is closed off to cars every Thursday when it becomes a city market place for pedestrians

As evidence of the power of LINK, at the closing night’s dinner at the Willard InterContinental Hotel, an ad-hoc strategy session took place. Odom huddled with Johns Creek Mayor Mike Bodker and Doug Hooker, executive director of the Atlanta Regional Commission, to come up with a way to put a South DeKalb MARTA line at the top of the list of transit projects when other funding becomes available.

Odom said an ARC resolution on a South DeKalb MARTA line could make the difference on whether the regional tax passes or fails.

Washington, D.C., provided a valuable backdrop for the 2012 LINK delegation. 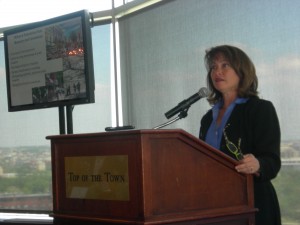 “We can learn a lot from D.C.,” said Reed, who was impressed with the economic energy in the nation’s capital and its appeal to highly educated young adults wanting to live in walkable live-work-play communities. “We need much more connectivity to make Atlanta more walkable. We have a real opportunity with the use of a light rail and streetcar system. And we are going to see efforts for more walking and cycling. We know that young people are moving away from cars.”

That’s what has happened in the Washington, D.C., suburb of Arlington, Va., which has the lowest unemployment in the state — less than 4 percent — compared with 9 percent in metro Atlanta.

Arlington County Supervisor Chris Zimmerman said a major investment in public transit combined with smart growth policies have led to a county where 92 percent of its office space and 40 percent of its residences are housed on 11 percent of the land — providing ample opportunity for walking and cycling. 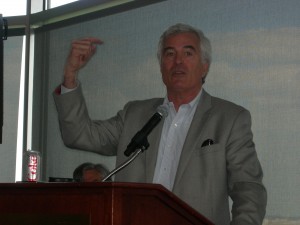 Developer Chris Leinberger, special advisor to the Brookings Institution, tells LINK delegation that Washington, D.C. is a model for how a city can rebuild itself

“We added density without traffic — 79 percent of Arlington’s workers don’t live here, but 40 percent of them use transit, bike or walk,” Zimmerman said. “We provided infrastructure for pedestrians and cranked up the transit service, not just the initial investment.”

“It’s so luxurious to have cars be an option,” she said. “People can live all over our region without a car.”

According to Leinberger, Washington, D.C., is a case study for metro Atlanta.

“The Washington metro area is the metro area that is showing the country how to rebuild itself,” Leinberger said. “There are multiple transportation options to get to places — bus, rail, bikes, and everything is within walking distance. Walkable urban is the future that the public is demanding.”