Leadership lessons from POTUS 1: What Washington wanted to say on becoming president

“The preliminary observation that a free government ought to be built on the information and virtue of the people will here find its proper place.”

On April 30, 1789 George Washington solemnly swore to “faithfully execute the Office of President of the United States, and … to the best of my ability, preserve, protect and defend the Constitution of the United States.” That he did, working to create a government that would allow us to address problems that the states, or individuals, could not tackle alone. 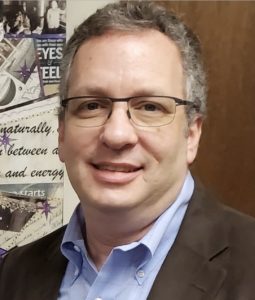 To really understand this, we have to start before it begins. Crisis after crisis had exposed the Articles of Confederation as unequal to our challenges. In 1787, delegates convened in Philadelphia to tweak the system, but quickly realized that would not suffice. Instead, they constructed an entirely new United States of America. The Constitution they came up with would never have been ratified but for the public’s confidence in George Washington, who they knew would take the helm as the first president.

Preparing for this awesome challenge, in January 1789, Washington drafted his inaugural address. Next, he sent it to James Madison, coyly noting that it was “written by a gentleman under this roof.” Not exactly a lie, Washington signaled that his ego was not an issue by implying that David Humphreys, who Madison knew was at Mount Vernon, was the author. In fact, the whole 73-page manuscript was not only written in Washington’s own words, but penned by his own hand.

Madison feared re-opening wounds from recent ratification battles, and worried about struggles to come. He took the bait, sending back an entirely new and much shorter draft that steered clear of any avoidable controversies. 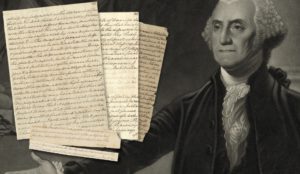 A portrait of George Washington with portions of his Undelivered Address. Credit: Seth Kaller, Inc.

Washington was in the habit of accepting good counsel. Putting aside his own draft, he delivered the appropriate but unremarkable Inaugural Address that Madison had written for him. What Washington really wanted to say was in his Undelivered Address, in effect his manifesto on designing, defining and defending our government.

Bucking thousands of years of tyrannical traditions, Washington staked out an exceptional vision for America. Despite the reality of slavery, the lack of political standing of women, and myriad other deep and often tragic injustices, he and the Founders created for us the possibility of an economically and religiously diverse, multi-racial society capable of overcoming deep divisions.

Given the current state of our nation, and the question of how our children are to handle nearly $10 trillion in new debt, I think the example of George Washington, Alexander Hamilton and the First Federal Congress might have something to teach us still.

A detail from Washington’s Undelivered Address: ‘fixed belief that this Constitution, is really in its formation a government of the people.’ Credit: Seth Kaller, Inc.

Leadership lessons from POTUS 1: All italic text is from Washington’s Undelivered Address; author’s notations appear after the text.

Due to unfortunate acts of hubris and scholarly vandalism, over the course of 30 years to 40 years, the Undelivered was taken apart, and much has been permanently lost. That, and efforts to reconstruct it, are a longer story.

“In all our appointments of persons to fill domestic & foreign offices, let us be careful to select only such as are distinguished for morals & abilities… We should seek to find the Men who are best qualified to fill Offices: but never give our consent to the creation of Offices to accomodate men.” 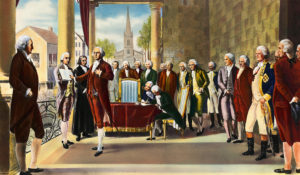 The inauguration of George Washington was administered at Federal Hall, in New York, as portrayed in this 1899 oil painting by Ramon De Elorriaga.

“it is time to advert to the system of policy, which ought, in my opinion, to be pursued to restore our public credit & secure our public felicity. I have already just glanced upon the superior advantages of a natural kind, which America possesses. My present object is to point out the means of encreasing & perpetuating the happiness of the people of that Country.”

Be humble, and mean it

“[Shall I] set up my judgement as the standard of perfection? And shall I arrogantly pronounce that whosoever differs from me, must discern the subject through a distorting medium, or be influenced by some nefarious design? The mind is so formed in different persons as to contemplate the same object in different points of view. Hence originates the difference on questions of the greatest import, both human & divine. In all Institutions of the former kind, great allowances are doubtless to be made for the fallibility & imperfection of their authors.”

Author: Washington treasured his reputation for honesty above all. He (dare I say, he alone?) was able to navigate the delicate balance between process and purpose. He had a real temper, which he struggled to keep in check, mostly succeeding. And he not only talked the talk, but walked the walk, seeking and accepting advice to guard against his own fallibility. 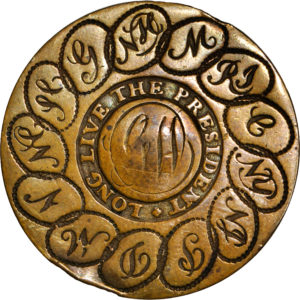 Invest in education, share the knowledge, and unleash creativity

“The preliminary observation that a free government ought to be built on the information and virtue of the people will here find its proper place. Happily our Citizens are remarkably instructed by education… & ingenious for making improvements. I believe, that more knowledge is, at this moment, diffused among them…”

Author: In an age of limited educational opportunity and avenues for the dissemination of information, and a strict demarcation between the governing and the governed, Washington showed flashes of innate forward-looking inclusiveness.

Experiment, think and adapt – but don’t rush to judgement

“I will barely suggest, whether it would not be the part of prudent men to observe it fully in movement, before they undertook to make such alterations, as might prevent a fair experiment of its effects?”

Author: Washington argues that the Constitution is imperfect but the best that could be crafted under the circumstances. He acknowledges that it could and should be amended to suit changing times and needs. However, he’s cautious about changing too much before it is given a chance to operate. I think he’d agree that our Electoral College experiment has lasted long enough.

Patriots support the government, and pay a fair share 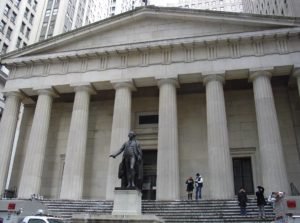 Federal Hall served as the seat of Congress and the new nation’s initial capitol. Credit: nps.gov

“I have a confident reliance, that your wisdom & patriotism will be exerted to raise the supplies for discharging the interest on the national debt & for supporting the government…in a manner as little burdensome to the people as possible…”

Author: Washington picked Alexander Hamilton, who counterintuitively called for the United States to take on the huge burden of the state’s Revolutionary War debts. Opponents decried the lack of “discrimination,” rewarding speculators while many original subscribers (who had sacrificed everything to purchase America’s independence) had been left with no choice but to sell for pennies on the dollar. Even Hamilton admitted it wasn’t fair, and knew how popular it would be to write those debts down. But establishing the creditworthiness of the nation, and ensuring that merchants and investors would buy in, would be worth the cost. Most of the Founders shared this basic understanding that stability and security were needed at the foundation of any system designed to benefit the people. As Hamilton predicted, this brought the overall cost of running the government down, and allowed it to borrow when future emergencies arose.

Play nicely with others

“it may be proper to give assurances of our friendly dispositions to other Powers. We may more at our leisure, meditate on such Treaties of Amity & Commerce, as shall be judged expedient to be propounded to or received from any of them.”

Do your own research, but remember what it’s all about 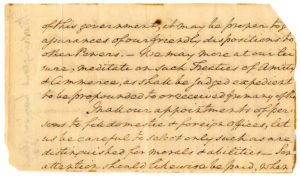 A detail from the Undelivered Address observes of federal officers: ‘let us be careful to select only such as are distinguished for morals and abilities….” Credit: Seth Kaller Inc.

“I have attentively heard and read every oral & printed information on both sides of the question that could be procured. This long & laborious investigation… has resulted in a fixed belief that this Constitution, is really in its formation a government of the people; that is to say, a government in which all power is derived from, and at stated periods reverts to them – and that, in its operation, it is purely, a government of Laws made & executed by the fair substitutes of the people alone.”

Author: Washington aimed to create a government of laws and not men. He sought to fortify the virtues of civil discourse, patriotic dissent and compromise, which means he supported a free press, long understood to be a foundation of liberty.

The people’s representatives should be accountable to the people

“The election of the differt branches of Congress by the Freemen, either directly or indirectly is the pivot on which turns the first wheel of government… At the same time the exercise of this right of election seems to be so regulated as to afford less opportunity for corruption & influence; & more for stability & system than has usually been incident to popular governments. Nor can the members of Congress exempt themselves from the consequences [of any unjust & tyrannical acts which they may impose upon others.]….” 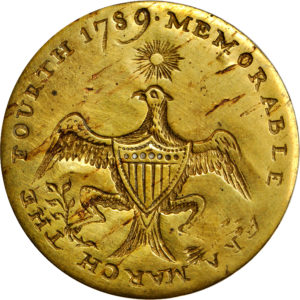 “The complete organization of the Judicial Department was left by the Constitution to the ulterior arrangement of Congress. You will be pleased therefore to let a supreme regard for equal justice & the inherent rights of the citizens be visible in all your proceedings on that important subject.”

Author: Washington expanded on this two years later, with his famous letter to Touro Synagogue. I recommend it to anyone looking for a healthy definition of American patriotism. As with the Declaration’s “all men are created equal,” this never has been literally been true – but America has always been at its best when it is working toward the positive vision proclaimed in our founding documents.

Kaller is seeking a philanthropic buyer to acquire Washington’s Undelivered Address collection. He would like to see it go to New York’s Federal Hall, where George Washington became the first president, where Hamilton created our financial system, and Madison compiled the Bill of Rights. Located on Wall Street, diagonal to the New York Stock Exchange, Federal Hall, rebuilt in 1842, once housed more gold than Fort Knox, and is now a national memorial administered by the National Park Service. 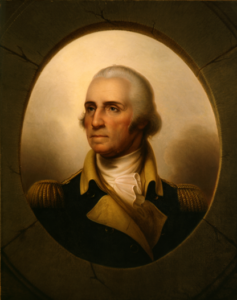 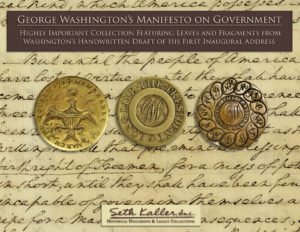 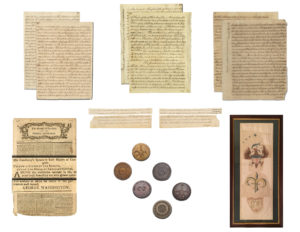