The Leatherbrook Holsteins dairy farm, near Americus, leaks manure and its byproducts into waterways and otherwise degrades the quality of life around it, according to a lawsuit filed by landowners against the farm, in U.S. District Court in Albany. Credit: Pending lawsuit

The handling of coal ash and livestock manure, when it is a byproduct of factory farming of cows, pigs and chickens, are among the environmental issues that may emerge on this year’s campaign trail, now that the focus on state lawmakers has shifted from lawmaking to campaigning. 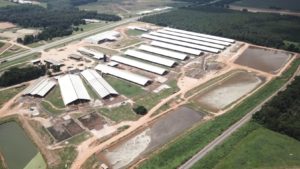 The Leatherbrook Holsteins dairy farm, near Americus, leaks manure and its byproducts into waterways and otherwise degrades the quality of life around it, according to a lawsuit filed in U.S. District Court in Albany by nearby landowners against the farm. Credit: Pending lawsuit

The first warning shot of plans to continue the coal ash battle was sent June 26 by Jennette Gayer, director of Environment Georgia and chair of the Georgia Water Coalition’s coal ash committee. A longer statement from Gayer contained this observation:

The factory farm issue could be kept top-of-mind by action in U.S. District Court in Albany. A lawsuit filed July 11, 2019 by landowners pleads for relief from an industrial dairy farm that, the lawsuit contends, is degrading the quality of life and violating the federal Clean Water Act: 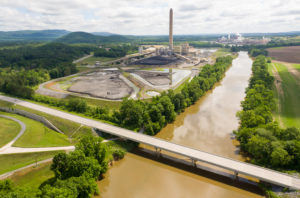 Georgia Power intends to store coal ash in unlined basins near the Coosa River at its Plant Hammond, near Rome. File/Credit: Hunter Nichols via SELC

The coal ash and manure proposals that were not settled in the legislation session that ended June 26 were:

Other significant environmental measures are likely to reappear in the legislative session that’s to begin in January 2021 – in whatever form the session may take due to the COVID-19 pandemic. 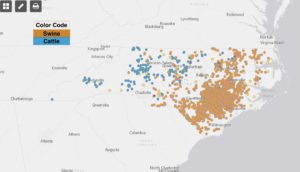 Hog farms have blanketed much of the eastern portion of North Carolina in the four decades the pork industry has focused on developing factory farms to the east of I-95, a distribution corridor. Gold denotes hog farms and blue denotes cattle farms. Credit: N.C. Department of Environmental Quality, David Pendered

These include proposals to require liners for coal ash pits; allowing transit entities to receive funding from the state’s motor fuel tax; requiring 100 percent clean energy; and banning single use plastic cups. These measures were among those that did not pass in the recent session, according to a report by Mark Woodall, legislative chair for Georgia’s chapter of the Sierra Club.

HB 93 had progressed in the Senate, where the Natural Resources Committee made two amendments and passed it on June 19 for further consideration. One amendment eliminated a requirement that notice in a county’s legal organ or newspapers of a pending release of water from a coal ash pond. The other would have established a timely notification of a release.

Senate leadership determined the appropriate, further consideration of HB 93 was to leave the proposal on the table.

The nuisance bill was portrayed by some advocates as a measure to protect hard working farmers from complaints voiced by folks new to a rural area and unaccustomed to the sights and scents of agriculture.

To offer a comparison in metro Atlanta, the type of friction described by advocates of HB 545 exists in DeKalb County. Some folks who have moved into the Brookhaven area complain of jets and other flying machines that use the county-owned, public use DeKalb-Peachtree Airport. The airport opened in 1941 as Naval Air Station Atlanta, and has continued to serve as an airport. 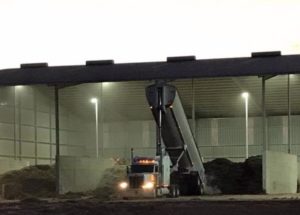 Cattle feed is transported to the Leatherbrook Holsteins dairy farm by tractor trailers and stored in a feed center. 2017. Credit: facebook.com/Leatherbrook-Holsteins

The difference is the farms are expanding. The number of animals is increasing, as is the amount of their waste. The proposal to restrict lawsuits in Georgia was styled after one in North Carolina. The pork industry has turned the eastern portion of the state into a pig farm, where product can be transported easily on I-95, which forms the western border of the swine factory.

In 2018, a jury awarded a couple a $25 million verdict Smithfield Food for what a report in the Raleigh News & Observer characterized as, “the swarms of flies, stench, rumbling trucks and other downsides of the hog farm next door.”

The case pending in Macon was filed by David Stack, of Atlanta, on behalf of the landowners, and R. Hutton Brown and April Lipscomb, of the Southern Environmental Law Center, on behalf of the Flint Riverkeeper. The plaintiffs renewed their request for a jury trial in a complain filed May 17.

Environmentalists and their advocates scored at least one victory – an effort to dissuade out-of-state coal ash from being hauled into Georgia. The Legislature passed Senate Bill 123 on June 24 and sent to the governor on June 25.

SB 123 raises the surcharge to $2.50 per ton from $1 per ton for coal ash, the residue of coal burnt to create electrical power. The fee matches that for household waste. The fee is related to the successful campaign launched in 2016 to halt a proposed coal ash dump in Wayne County; Dink NeSmith led that effort, through his Athens-based Community Newspapers, Inc. Greenlaw awarded the effort a Special Media Recognition for Environmental Championship Award.