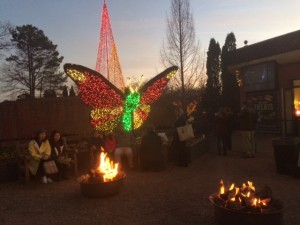 The sun sets over downtown Atlanta and this giant topiary butterfly, a symbol of transformation emblazoned with lights, at the Atlanta Botanical Gardens on New Year’s Eve.

At the Atlanta Botanical Garden, as we watched the last sunset of 2014 drop behind the Midtown skyline, my wife had asked our daughters and me, more than once, if we had any resolutions for the new year. I had nothing. The question put me in a small funk.

Isn’t it all supposed to happen in a second?

At the stroke of midnight on New Year’s Eve, you put down that second slice of deep dish apple pie and start the diet, or tip the foot of the champagne glass skyward and swallow what you vow will be your last sip of alcohol. Or maybe you pledge to quit the mill where you work or learn a new language or read a book a week.

Or perhaps you make no resolutions at all. After all, what’s the point? There’s a nine in 10 chance you’ll fail, according to many surveys. By Jan. 10, when the botanical garden’s spectacular Garden Lights, Holiday Nights ends, some of our resolutions already will be history.

Looking back and in

For 2014, I had set two resolutions. One I accomplished, the other I failed to fulfill. If I were more of a glass-half-full person, I might claim to be batting .500. But the lifelong Eeyore in me says it was God or luck that helped me succeed at one, and my wavering belief in myself that cost me the other.

Change, that’s what these resolutions are all about, isn’t it? It’s one thing to start and perhaps succeed at a diet. It’s quite another to break a cycle of addiction that brings a sufferer back to the overconsumption. One can pledge to write down a positive experience each day, but is that enough to transform a melancholic nature?

Apparently it is possible to change more about ourselves than we previously thought.

Throughout most of the 20th century, most neuroscientists believed that the basic structure of the brain remained primarily fixed after childhood. In recent years, researchers have found that “brain plasticity” continues into adulthood and that it is actually possible through intensive therapy to alter the neural pathways that lead to undesired behaviors such as addiction or obsessive compulsive behaviors.

An image often used to describe the process is clearing out an old-growth forest and replacing it with new trees.

Talking growth in the garden

As I walked along the tree-lined pathways emblazoned with holiday lights, I asked other visitors if they believed personal change was possible.

I asked Lewis if she had made any resolutions for 2015. She laughed.

It wasn’t exactly the answer I wanted to hear, but then Lewis seemed pretty content with herself. Why bother with trying to change if you believe you don’t have to?

Further along the path, I met Margaret Spencer who gave me a different answer.

“If there is something about yourself or your life that you really, really dislike or feel down about, you can put in a concerted effort to change it,” Spencer said. “Not that it’s going to happen overnight or even in a year or even in 10 years. But over a lifetime you can change if you work at it.”

“It’s not easy, Spencer said. “Nobody ever said it’s going to be easy.”

Spencer, 30, spent 2014 “growing, healing and finding” herself after a traumatic end to a long-term relationship 18 months ago.

She said she’s taking a step further this year.

“This is the first year I’ve made a resolution,” said Spencer, who lives in Marietta. “I decided this is my year of adventure. My goal is to try something I’ve never done every month.”

A path lit by trees covered in lights at the Atlanta Botanical Gardens. The holiday lights will stay up until January 10.

Spencer said she has a list: hang gliding, skeet shooting, paddle boarding. It started with her coming out on the seventh day of Christmas, also New Years Eve, to the 1.5 million LED lights decorating the 30 acres next to Piedmont Park.

“I wanted to come and see the lights and so I thought, ‘Screw it, if you don’t have anybody to come with you, just go by yourself,’” Spencer said.

I wish I could say Spencer’s inspirational resolution sparked me to come up with one of my own. It didn’t.

But as I warmed myself beside a kettle fire pit between giant topiaries of a unicorn and a butterfly, both made of Christmas lights, I realized something about resolutions.

The unicorn is spectacular and completely mythical, what we wish we could see but never will, like many promises we make on Dec. 31. When we know exactly and thoughtfully what we are meant to achieve, there’s the butterfly that reminds us how hard and good it can be to strive. We see the butterfly’s beauty every day, but only after a caterpillar spins a cocoon and digests itself. Real change takes work and sacrifice.

I realized I didn’t need to manufacture a resolution in 2015. Apart from what anyone else says or thinks, I just need to believe in the power of transformation and take action.

Previous Article
Atlanta BeltLine and APS should unify, not divide, our city – for all our sakes
Next Article
‘Foxcatcher’ – Steve Carell as John du Pont collects Olympic wrestlers