Living tribute to Black female astronaut, a personal journey that led to its creation

A living tribute to Stephanie Wilson, the pioneering Black astronaut who may walk on the moon in 2024, is to be officially unveiled Monday by earthworks artist Stan Herd, who in January created the image of John Lewis along Freedom Parkway. 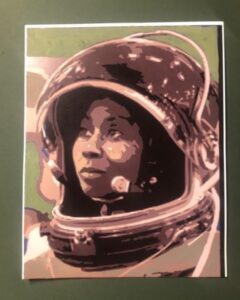 The Wilson artwork is part of the effort, amid World Science Week, to encourage women and girls, and people of color, to take an interest in world of science.

At the unveiling scheduled for 9 a.m., Wilson is to join virtually from Kennedy Space Center, where she’s in quarantine as backup crew for the next NASA International Space Station flight. Two former NASA astronauts are to be onsite – Nicole Stott and Susan Kilrain. Kilrain is a Georgia Tech grad who served as the second woman to pilot the space shuttle, according to a statement released by Purpose Entertainment, a sponsor.

Wilson is a real-life role model. She decided in high school to study engineering in college, applied twice to the astronaut program and, upon acceptance, learned to swim well enough to pass the test. She still holds the record for the most days in space of any Black female, 42 days, according to her NASA biography.

Herd described his personal learning experience as he decided to create the artwork.

Herd said he supports science. But he always had questioned the nation’s investment in the space program: All that money could have been spent on any number of programs with a more direct benefit to citizens. 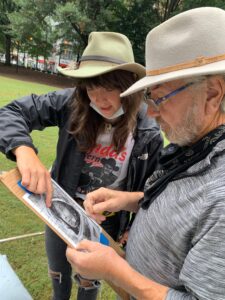 Artists Stan Herd and Kyra Roesle review the drawing for the portrait of NASA astronaut Stephanie Wilson, being created at Woodruff Park. (Photo by Kelly Jordan)

“I was on the side of space travel,” Herd said. “But we spent a lot of money there.”

That’s when Christina Korp came forward with a compelling case for the project that became the Wilson piece in Woodruff Park. Korp brought to the conversation with Herd her own deeply personal connection with the nation’s space program.

Korp is the former manager of NASA astronaut Buzz Aldrin, who was paired with Neil Armstrong as the first two humans to walk on the moon. The homepage on Korp’s website describes her as an “astronaut wrangler, astronaut manager, space advisor, grandiose dreamer.” Korp’s portfolio includes the last five major celebrations at Kenneday Space Center of Apollo 11, the flight that landed Armstrong and Aldrin on the moon. In addition, Korp produced “Our Story: Portraits of Change,” the 1,000 square foot interactive photo mosaic that commemorates the 100th anniversary of the 19th amendment and the woman’s suffrage movement in the U.S.

That last item, “Our Story,” may have clinched the deal. It comports with Herd’s outlook on his work. When Herd was in Atlanta in January to complete the John Lewis tribute, unveiled near the inauguration of the Biden/Harris administration, Herd said he focuses his art on “causes and issues and thoughts and opinions that have changed the world.”

In the end, Korp prevailed upon Herd to create an earthwork project in Atlanta. He described his learning curve that led to his participation: 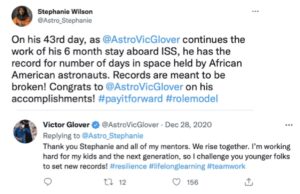 Mutual respect is shared in tweets by the two Black astronauts who’ve set the record for most days logged in space: Stephanie Wilson and Vic Glover. (Images from twitter.com, compiled by David Pendered)

Herd worked through recent rain events to complete the earthwork. It’s to be surrounded by about 1,500 tiles of space art created by students at 14 Atlanta Public Schools, plus patients at three Children’s Healthcare of Atlanta hospitals, according to the statement from Purpose Entertainment.

Wilson’s pioneering days are not over. She may walk on the moon. NASA has selected Wilson as one of 18 astronauts – nine men and nine women – for the Artemis Team, which is to prepare for landing a man and a woman on the moon in 2024. More information is available here. 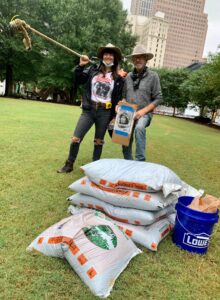 Artists Kyra Roesle and Stan Herd pose in Woodruff Park during the creation of the earthwork portrait of NASA astronaut Stephanie Wilson. (Photo by Kelly Jordan) 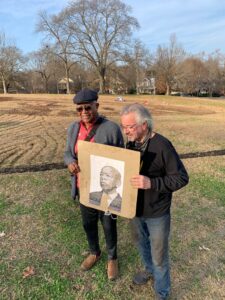 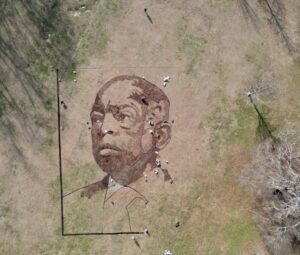 This aerial view shows the Earthwork image of John Lewis taking shape under the hands of artist Stan Herd. The art was created along Freedom Parkway in January. (File/Image courtesy of Stan Herd)