The Daffodil Project team helped plant a memory garden in Japan at The Hill of Humanity, a memorial for Japanese diplomat Chiune Sugihara who saved thousands of lives while stationed in Lithuania. (Photo courtesy of The Daffodil Project)

“How can anyone who remembers stay silent?”

The 2004 quote from Holocaust survivor, activist and Nobel laureate Elie Wiesel encapsulates the mission of the Atlanta-based Daffodil Project.

The Daffodil Project is an international initiative to plant 1.5 million daffodils in remembrance of the children who lost their lives in the Holocaust.

The project was created in 2010 by Andrea Videlefsky, the president of parent organization Am Yisrael Chai, which focuses on Holocaust education and applies that work to combat bigotry, prejudice, genocide and antisemitism. 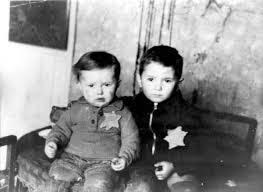 The daffodils represent the Yellow Star that Jewish residents were forced to wear during the Holocaust, signifying resilience and hope. (Photo courtesy of The Daffodil Project)

Daffodils were chosen to represent the Yellow Star that Jewish residents were forced to wear during the Holocaust, and the yellow flower signifies remembrance. They’re also resilient flowers, growing back year after year.

“It’s an inspiring way of getting people involved in remembering the past and taking action for the future,” Videlefsky said. “It gives a message of hope for the future. So it doesn’t just stay only with Holocaust education but reminds us to take action. And it reminds us of our obligation to really stand up against instances of hatred occurring in the world today.”

One and half million can feel like such an abstract number, Videlefsky added, and seeing the beds of flowers helps conceptualize the extent of lives lost.

By January, a total of 700,000 daffodils will be planted — promising a spring of vibrant yellow blooms across Atlanta and stretching overseas to places like Israel, Poland, Germany and the Czech Republic.

Downtown Atlanta represents almost half of the memory gardens, with over 300,000 daffodils planted in partnership with Central Atlanta Progress (CAP).

CAP President A.J. Robinson says that the initiative is a meaningful way to “express our civic pride with beauty and purpose.”

“We are able to connect downtown institutions in a meaningful and uplifting way, highlighting our commitment to a better or more beautiful downtown Atlanta, the most visible part of our City,” he added.

The Daffodil Project also offers other initiatives, like their Twinning Project, which connects students preparing for their Bar or Bat Mitzvah with a child who didn’t reach that milestone due to the atrocities of the Holocaust.

The students fill out a questionnaire with a background on their family, and they light a candle or have an empty seat at the table in honor of the child who lost their life.

“We’ve just found the most incredible matches, some of whom have actually been related and others not necessarily so,” Videlefsky said. “We actually find links for somebody’s family where there might have been a survivor, or somebody who actually had perished themselves but [the family] didn’t know that they might have had a sibling or a cousin.”

“It’s very, very meaningful for the Bar or Bat Mitzvah students and for their extended families,” she added.

Many of Atlanta’s memory gardens are planted around memorials or places advocating for human rights, like the King Center, Freedom Park and the Center for Civil and Human Rights.

A memory garden is also planted in Japan at The Hill of Humanity, a memorial for Japanese diplomat Chiune Sugihara who saved thousands of lives while stationed in Lithuania — a remarkable feat in an area with one of the highest victim rates in Europe during the Holocaust.

Other memory gardens are nestled in local parks, like the newly-planted daffodil beds in Grant Park.

The Grant Park Conservancy (GPC) teamed up with local Congregation Bet Haverim to plant 2,000 bulbs around the Erskine Fountain in the park last month. 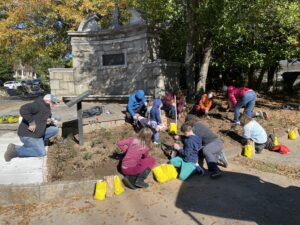 On planting day, kids in the Congregation’s Sunday School helped craft the new memory garden, accompanied by a celebration from synagogue leaders who led a group recital of Eli Eli, a song associated with Yom HaShoah.

When GPC Executive Director Michelle Blackmon spoke about the importance of the memory garden, emotion filled her voice.

“I truly hope [visitors] walk away with a sense of responsibility and acknowledge that horrible things have happened, and we can’t let them happen again,” she said. “But horrible things are still happening, and we have a responsibility to be aware of them and to do whatever we can to alleviate the suffering of everyone, and particularly children.”

Next month, the Daffodil Project is hosting its Annual Holocaust Remembrance Event, and this year the guest of honor is 100-year-old Ella Blumenthal, who survived the Warsaw Ghetto Uprising and three concentration camps.

If you want to support the Daffodil Project’s mission, consider getting involved by attending the Remembrance Event or helping the team reach their goal of planting 1.5 million daffodils.

Previous Article
Georgia Conservancy to Launch Mayors’ Clinics for Community Design in 2022
Next Article
Three Wins (and Three Cheers!) for Parks Heading into 2022