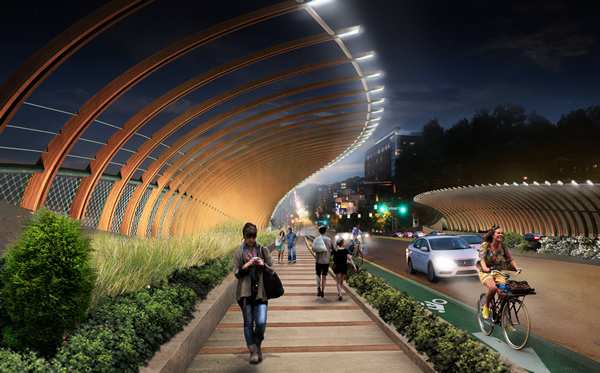 Winners of a design competition to retrofit and enhance two of Atlanta’s bridges over the Downtown Connector were announced Friday at the AIA national convention that is meeting in town this week.

The two winning designs – one for the 10th Street bridge in Midtown and the other for the Courtland-McGill bridge in downtown – were selected “blindly” by a panel of design professionals. 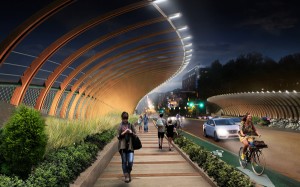 The winner of the Courtland-McGill bridge design competition was Roger DeWeese with Peachtree Architects of Atlanta for his “Organic Canopy” concept.

(See the design proposals for both bridges below). 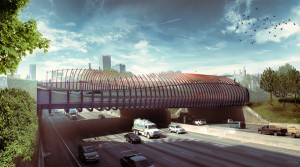 “I’m so pleased with the winning selections of the Atlanta Bridgescape Competition, and incredibly excited that Central Atlanta Progress, Midtown Alliance and American Institute of Architects are engaging the design community and the public in a creative competition on this scale,” Hammond said in a release announcing the winners. “It’s provoked some great conversations about the future shape our city, our infrastructure and the care for artistic improvement.”

In addition to the official competition winners, the winners of the People’s Choice Award also were announced Friday at the AIA conference. 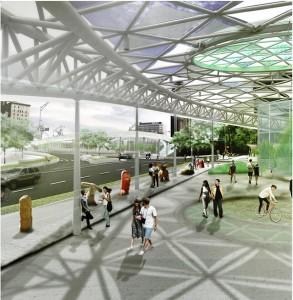 Organic Canopy is the winning design for Courtland-McGill bridge (Special)

The People’s Choice Award was established to encourage public input and celebrate design excellence.  Nearly 3,000 people voted online for their favorite design for each bridge.

The winners of the People’s Choice Award are as follows:

Launched earlier this year, the Atlanta Bridgescape Competition solicited participation for the two bridge enhancement projects in Midtown and downtown. After receiving more than 20 submissions in March, the competition jury shortlisted five finalists that worked to further develop and refine their ideas, including the feasibility of implementation based on a budget of up to $3 million per bridge.

Final designs were received on May 8th. 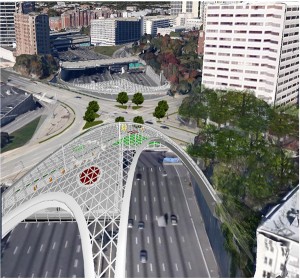 “Competitions are about vision and big ideas,” said competition manager Tony Rizzuto, chair in the Department of Architecture at Kennesaw State University. “They have the potential to take us out of our comfort zone to see possibilities we never imaged. They provide a catalyst for discourse on public space and promote the pursuit of better design.”

The Atlanta Bridgescape Competition is a collaborative initiative led by Midtown Alliance, Central Atlanta Progress/Atlanta Downtown Improvement District, the Atlanta Chapter of the American Institute of Architects (AIA) and the Architecture and Design Center. It is being sponsored by Cardno.