The London-based design firm brought in to collaborate on the design of the Gulch is fresh off a major project that retooled a section of London that compares to Downtown Atlanta. 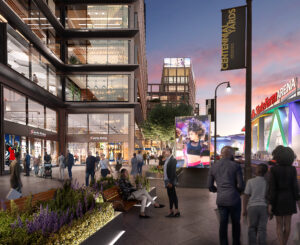 This rendering, released Tuesday by Centennial Yards, emphasizes a vibrant street scene on the side of development that’s to face State Farm Arena. Credit: DBOX for Centennial Yards

London-based Foster + Partners served as architect of a 50-story apartment building that opened in 2020 to anchor the new mixed use Principal Place, in the city’s East End neighborhood of Shoreditch, located in the Borough of Hackney.

Principal Place is intended to serve as a transition between the city’s expanding financial district and the gritty neighborhood to the east. This neighborhood has been home to a rough crowd since before Shakespeare’s “Romeo and Juliet” had its first performance there, in a building dismantled for wood to build the Globe Theatre.

Though this neighborhood is across an ocean, it’s familiar to U.S. viewers of the long-running BBC TV series “Eastenders.” The show, since 1985, has told stories about life in this working-class neighborhood. 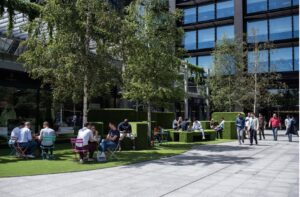 The firm brought in to collaborate on Centennial Yards designed this project in London, Principal Place, that was intended to transition from the city’s financial district to a gritty neighborhood in the city’s End End. Credit: fosterandpartners.com

The master developer of Centennial Yards formally announced Tuesday that the updated master plan it was releasing was shaped in part by Foster + Partners. The company was brought in to work with the existing design team, Chicago-based Perkins&Will.

By coincidence, Perkins & Will has its own recent ties to London. The firm has recently completed an in-house competition to redesign London’s waterways.

The contest had three segments that aimed at promoting the city’s architecture, arts and cultures, according to a statement. One of the projects that made the short list was produced by three members of the firm’s office in Atlanta.

Brian McGowan, president of Centennial Yards Co., used the release of the master plan, and the related special administrative permit application submitted to Atlanta, to herald pending construction of buildings at the 50-acre site:

McGowan officially joined the project in June. His lengthy vita in economic development includes four stops that may prove to be particularly helpful in navigating the complexities and politics of big developments in Atlanta – Invest Atlanta, the city’s development arm, president/CEO; Metro Atlanta Chamber, vice president/COO; Dentons, a global law firm where he worked with transnational economic development projects; and Atlanta BeltLine, CEO.