Clark Atlanta University will ring the long-silent bells at Harkness Hall on Easter Sunday morning in a celebration that honors the culmination of Holy Week and recognizes those touched by the COVID-19 pandemic. The tribute is to be broadcast via the school’s page on Facebook. 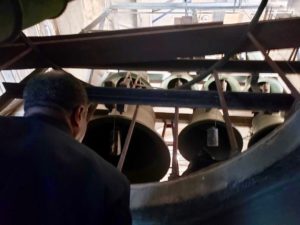 Clark Atlanta University President George T. French Jr. looks at the bells in Harkness Hall, which are to ring on Easter Sunday for the first time since the 1990s. Credit: CAU

The program is to begin at noon and include these songs:

“The bells at Harkness Hall have not tolled in many years,” CAU president George T. French Jr. said in a statement. “I believe on this Easter Sunday it is most appropriate that we ring them in recognition of this special day.”

As an affiliate of the United Methodist Church, CAU’s choice of Easter as the time to renew the bell was a logical selection. The arrival of the global pandemic provided an additional moment in time, to recognize those the school cited as: “first responders, front-line heroes across the world who are providing care to those suffering from the pandemic, and honor those who have lost their lives to the virus during the world-wide pandemic.”

As French said in the statement: 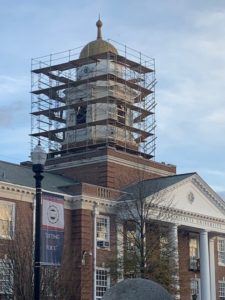 The bells in the clock tower at Clark Atlanta University’s Harkness Hall have been silent since the 1990s and are to be rung on Easter Sunday following the clock tower’s restoration. Credit: CAU

CAU was established as a single entity in 1988 through the consolidation of Clark College and Atlanta University. Atlanta University was formed in 1865 and was the nation’s oldest college to serve a predominately African American student population, according to a report in georgiaencyclopedia.com.

Note to readers: To listen to the Easter service of bells at Clark Atlanta University, visit the school’s page on Facebook.