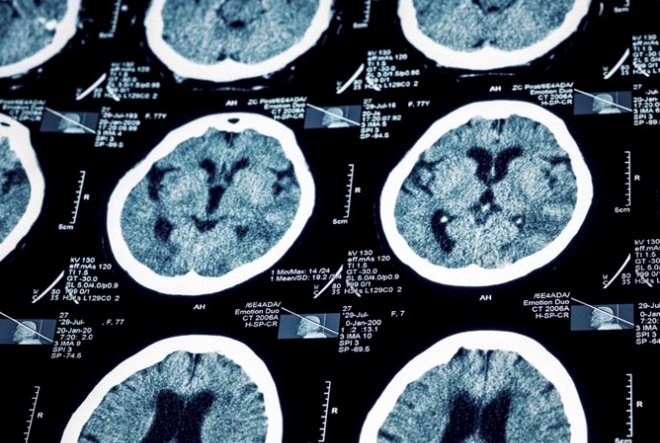 CT scan images of the brain are used to diagnose and treat strokes. Credit: rush.edu

The Marcus Foundation has donated $15 million to enhance the prevention and treatment of stroke in the Stroke Belt that covers 11 southern states. It comes on the heels of an analysis by Scientific American magazine that shows stroke is no longer a disease of the elderly — it’s striking a soaring number of millennials. 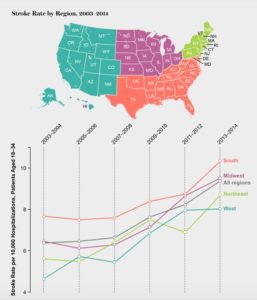 The rate of strokes among millennials, both men and women, have been skyrocketing, according to research by the U.S. Centers for Disease Control and Prevention and detailed by a report in Scientific American magazine. Credit: scientificamerican.com

The expansion of stroke into a demographic of folks aged 18 years to 34 years underscores the value of the foundation’s donations to the prevention and treatment of stroke. Stroke rates rose by 32 percent for women and 15 percent for men in this age range, from 2003 to 2012, according to a 2017 report by the U.S. Centers for Disease Control and Prevention cited in the Scientific American report.

A stroke at that relatively young age impacts the patient’s key earning years. Down the road, a stroke in younger years sets the stage for strokes that are stronger, and more often fatal, when the next stroke occurs, according to the report.

The donation, made by a foundation named for its chairman, retired Home Depot co-founder Bernie Marcus, is to establish the Marcus Stroke Network, according to a March 21 statement.

The network is to create a collaboration of stroke experts at Grady Health System, Emory University School of Medicine, Boca Raton [Fla.] Regional Hospital, and the American Heart Association/American Stroke Association. The network is to promote prevention and treatment of stroke.

The donation is to fund an array of telemedicine methods to hasten the start of stroke treatment. Timing is crucial in stroke treatment, where the mantra is: Time is brain. In one type of stroke, ischemic, the brain of an untreated patient ages in one hour the equivalent of 3.6 years, according to a 2006 report from the University of California, Los Angeles.

For starters, the grant is to enable diagnosis of suspected stroke to begin during the ambulance trip from stroke site to a hospital. CT scanners are to be installed in vehicles so that the X-ray pictures of the brain that are used to diagnose a stroke can be started en route, rather than at a hospital. The vehicles are to be known as Mobile Stroke Units. 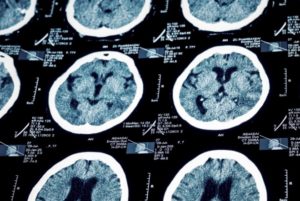 CT scan images of the brain are used to diagnose and treat strokes. Credit: rush.edu

Paramedics who provide pre-hospital care are to receive support to help with the diagnosis and triage of stoke patients to the nearest appropriate hospital. The result will be that patients will be taken to hospitals that have both the ability and capacity to provide treatment.

Finally, the physician teams with the Marcus Stroke Network are to be connected via telemedicine technology to extend their ability to provide stroke care. The teleconferences will enable experts to participate in care and treatment from remote locations.

The director of the Marcus Stroke and Neuroscience Center, at Grady Memorial Hospital, portrays the fruit of the network as groundbreaking in the diagnosis and treatment of stroke.

“Using a sophisticated telemedicine platform, our goal is to extend the vast experience and proven expertise of our stroke specialists to participating network hospitals, giving each and every stroke patient in the areas serviced by our network partners the best chance of survival and living an independent quality of life,” Frankel said.