The Marietta National Cemetery is an excellent spot for a quiet reflection on this day of remembrance for those who died while in service to the nation.

A ceremony that begins around noon on every Memorial Day strikes a tender balance of past losses and future hopes. A handful of dignitaries speak, though the loudspeakers barely cast their words across the hushed crowd gathered atop a summit. 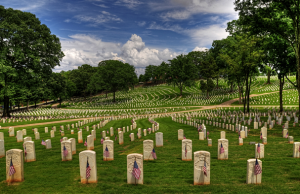 The Marietta National Cemetery is a place for quiet reflection on Memorial Day. Credit: bearwoodsblog.wordpress.com

Georgia now has two national cemeteries. One is in Marietta, which was built originally for Civil War casualties and is now closed to new interments. The other is in Canton, which opened in 2006 on 775 acres donated by the late Scott Hudgens, a World War II veteran who became a leading developer in metro Atlanta.

Preparations for the ceremony in Marietta already have already started. On Saturday, each grave was honored with a U.S. flag placed by a member of the Boy Scouts of America, Cub Scouts, Girl Scouts of America and Brownies.

In years past, the youngsters would place the flag, step back, and salute. To participate in the ceremony, scouts are required to wear their dress uniforms. Each scout receives a community service patch from the National Memorial Association of Georgia.

U.S. flags also fly from white staffs along the roads within the cemetery. These flags have been donated by families of veterans, who receive a flag upon the death of the service member.

On Memorial Day, visitors arriving by car will be directed to parking spaces outside the cemetery. It’s a short walk to the rostrum atop a hill, where the ceremony occurs. But the climb to the hilltop is steep in places, and walkers should be prepared for the heat of a late spring day. 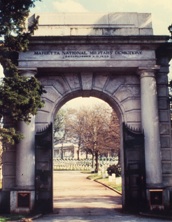 The masonry monument at Marietta National Cemetery is inscribed with words for fallen soldiers. Credit: Department of Veteran Affairs

Shuttle services are available for those who need or want help getting up and down the hill.

In years past, the crowd would wait quietly as the dignitaries took their seats on the rostrum. The sense was of a collective moment of reflection, perhaps of relatives and friends who died in service and, perhaps, of our nation’s current state of affairs.

This has been the current order of service in recent years for a ceremony now entering its 63rd year.

Click here to see a video from the 2011 ceremony.

The Marietta National Cemetery opened in 1866 on a site donated by Henry Green Cole, a local merchant who once had hoped the land would be chosen for a state Capitol.

According to the Department of Veterans Affairs, the stone monument that serves as the formal entrance to the cemetery is one of five built in the South. The cemetery was placed on the National Register of Historic Places in 1998.

The inscription across the monument reads:  “Here rest the remains of 10,312 Officers and Soldiers who died in defense of the Union 1861-1865.”

Click here to read more about the Marietta National Cemetery. 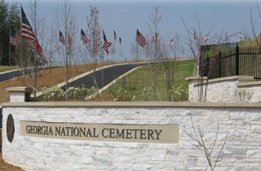 The Georgia National Cemetery, in Canton, is on land donated by Scott Hudgens, a noted developer and World War II veteran. Credit: Department of Veterans Affairs

The Georgia National Cemetery is located near another sacred burial ground – the Etowah Indian Mounds, now a historic site operated by the Georgia Department of Natural Resources. Etowah is said to be the most intact example of Mississippian Culture in the southeast.

The Georgia National Cemetery consists of 775 acres that Hudgens donated in 2001 to the National Cemetery Administration. The site formerly was logged and used for hunting. The terrain is so steep that less than half of the land – 330 acres – will be developed for burials.

Click here to read more about the Georgia National Cemetery.