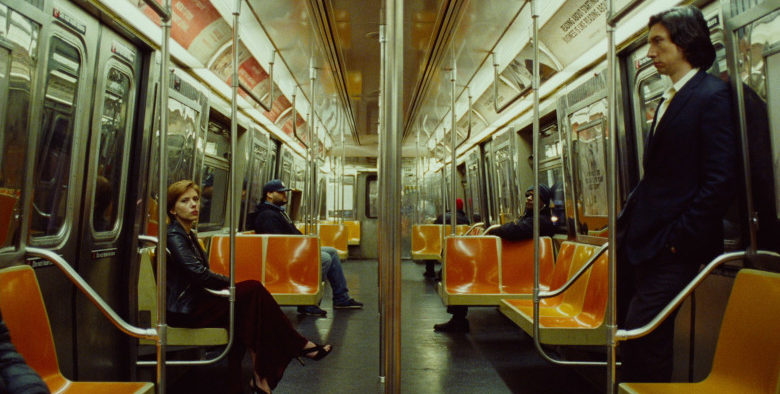 A scene from the "Marriage Story"

The film begins with a pair of voiceovers as Charlie (Adam Driver) and Nicole (Scarlett Johansson) say what they “know” about each other. The lists are sweet, funny, occasionally borderline critical, but nothing to make you pause.

Until, that is, we hear the deadly words, “Okay, who wants to start?” 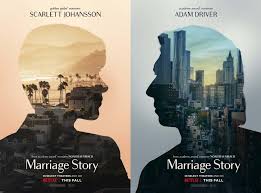 A poster of the “Marriage Story” movie

The couple is with a marriage counselor and that, as they say, is that. Especially in a movie with a deceptively hopeful title like, well, “Marriage Story.”

He’s a successful Off-Broadway director (his company is named Exit Ghost – think, “Hamlet” – just one of the sharp little bits that Baumbach loves to work into his scripts). She’s a reasonably well-known L.A. actress who moved east to NYC to work – and fall in love – with him. Together, they have a 10-year-old son, Henry (Azhy Robertson), and a play, directed by him, starring her, that’s headed to Broadway.

But the main issue is little Henry. Nicole’s been offered a lead role in a TV pilot and bi-coastal shared custody is not easy to work out. These two “civilized,” artistic people want to give getting a divorce their best shot, i.e., no lawyers, no financial wrangling, no nastiness over who gets what (aside from Henry).

Well, that lasts about seven minutes.

The battle moves to her home turf where Nicole moves in with her bubbly mom (Julie Haggerty). Because she has Henry with her, Charlie must follow. Nicole hires a sleek monster named Nora (Laura Dern), a specialist in tough talk and hot tea. Charlie tries a mensch-like attorney (Alan Alda), but realizes that, if he’s going to play hardball, he’s going to have to have a monster of his own (Ray Liotta).

Exit all pretense at good will. 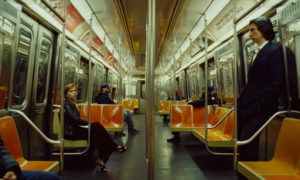 A scene from the “Marriage Story”

Baumbach has been in divorce court before. His 2005 picture, “The Squid and the Whale,” was a scalding look at his parents’ split.  And it’s difficult, if you admire that movie as much as I do, to get it out of your head. Jeff Daniels and Laura Linney were explosive together, at times approaching the blistering black humor of the mommy and daddy of all unhappy marriage movies, “Who’s Afraid of Virginia Woolf?”

“Marriage Story” operates at a different level, and it can take some getting used to. Whereas both Linney and Daniels were the bad guys, so to speak (the movie was, perhaps, a bit crueler to Daniels’ character), Driver and Johansson don’t stink up the joint. She may seem more reasonable, but he’s the one in enemy territory.

Take, for instance, Charlie’s evening with a social worker assigned to see if he is a fit enough dad to share his son. It’s a small gem of discomfort and miscommunication. Trying to break the ice, he jokingly wonders if she ever observes married people. “Why would I?” she replies, clearly not getting the joke.

That’s part of what makes “Marriage Story” so good. Sometimes there’s a joke to get and sometimes not. Sometimes, there’s just pain. Both stars are likely to land Oscar nominations, but keep an eye on the supporting category – and Dern. She packs up the movie in her expensive little Rodeo Drive purse and walks off with it.  Effortlessly.

Previous Article
Biomedical Equipment Donations With Training Lead to Sustainability
Next Article
Chase CEO at Morehouse: ‘If you don’t have character and culture, you are not going to be a leader’