Four decades ago, MARTA’s first heavy-rail fleet hit the tracks, and now, that chapter in Atlanta’s history books is being preserved.

On Wednesday, Nov. 16, MARTA donated Railcar #509 — part of its original fleet — to the Southeastern Railway Museum. The museum currently houses historic MARTA buses but this is the first of the railcars added to its collection.

The Museum sits on a 35-acre plot in Duluth and was started by the Atlanta Chapter of the National Railway Historical Society in 1970. In addition to this new MARTA addition, the Museum features about 90 items of inventory including historic Pullman cars and steam and diesel locomotives.

The railcar, along with 20 others in the original fleet, was built by engineering firm Société Franco-Belge and hit the tracks in 1981. Railcar #509 was eventually retired 30 years later and has sat at the Avondale Railyard since. The original units stretch 75 feet long and weigh 81,000 pounds, featuring 46 passenger seats and operator cabs on both ends.

MARTA was established in 1965 with the passage of the Metropolitan Atlanta Rapid Transit Authority Act, and construction of its rail system began in 1975. Today, the transit authority has 340 railcars in rotation and is the eighth-largest transit system in the U.S., according to the New Georgia Encyclopedia.

Railcar #509 was also donated, in part, to make room as MARTA transitions to its new railcar fleet. Over the next few years, MARTA plans to replace its entire fleet with 224 railcars — 56 four-car train sets — which the transit authority purchased from manufacturer Stadler Rail in 2019. The equipment cost $646 million, the largest single procurement for both organizations. 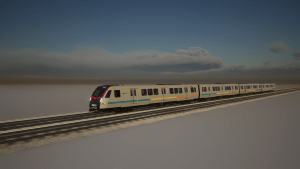 A rendering of the new fleet. (Courtesy of MARTA.)

The new fleet will feature a variety of updates. The new cars’ interior will allow riders to move freely between units, and updated technology like digital maps and charging stations will make the ride more comfortable and convenient. The exterior includes a new look and a front light that displays the rail line color — red, gold, green or blue.

“With our future railcar fleet now in the final design, it’s time we start clearing track space to make room for our new trains. We’re beginning to retire our oldest railcars and we want to ensure that one of them is around for future generations to see. At the Southeastern Railway Museum, it will join our historic fleet of MARTA buses as we begin a complete railcar fleet replacement,” MARTA General Manager and CEO Collie Greenwood wrote in the same release.

MARTA Journeyman Railcar Mechanic Pierre Merrick added: “I got here in ’98 and this is what I trained on to become a mechanic, so it’s got a little nostalgia going. I’m not going to shed a tear, but this is the end of an era. We are getting ready to start a new chapter with the new cars, so everybody can see the transition from old to new.”