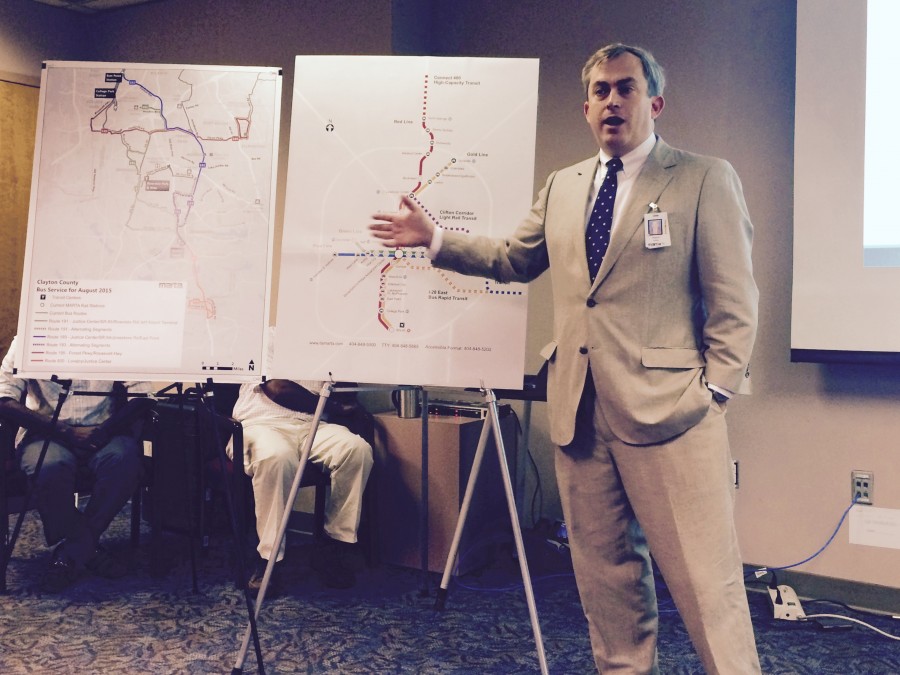 MARTA executives on Thursday unveiled plans to make the transit agency more customer friendly. They announced a new partnership between MARTA and Uber as well as unveiled a pilot program to have wi-fi on 50 MARTA buses

The Uber partnership already is on MARTA’s mobile app; and executives said that free wi-fi should be available throughout the whole system (on all buses, rail stations and trains) within a year.

That is only the beginning. MARTA Board Chairman Robbie Ashe said the transit agency is focused on expanding its rail network to North Fulton, South DeKalb, the Clifton Corridor and Clayton County.

But in order for MARTA to expand its system, it will need more revenue. 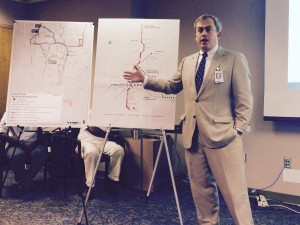 MARTA Chairman Robbie Ashe shows how the transit agency would like to expand in the future (Photo: Maria Saporta)

Ashe said the best prospect for that revenue would be to increase the MARTA sales tax in the City of Atlanta, Fulton and DeKalb counties by a half-penny. It is possible that Clayton County also would be included, but it just passed a one-penny sales tax in November to restart transit service in the county.

MARTA is launching a major education effort between now and the next session of the General Assembly to get support for a bill that would allow voters in those jurisdictions to vote for an additional half-penny that would be put in place for 40 years.

Ashe said an additional half-cent sales tax was probably MARTA’s best option  to get increased revenues at this time – rather than expecting the state government to start supporting the agency’s operations. MARTA is the largest transit agency in the nation to not receive annual operating funds from its state government.

“This is how Fulton and DeKalb voters can take control of their own destiny,” Ashe said.”I think MARTA’s most realistic option is to raise the revenues ourselves.”

Keith Parker, MARTA’s general manager and CEO, said that when he is attending meetings in Alpharetta, Johns Creek and Roswell, “people are saying we need service. We are now giving them a chance to get what they are asking for.”

Parker’s goal has been to improve the reputation, perception and operations of MARTA so that more and more people in the region will want to be part of the system. 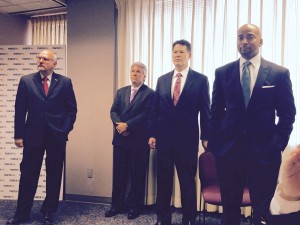 The agency said that is estimating that it will have a $25.5 million surplus for its 2015 fiscal year – making it the third year in a row that it has been operating in the black.

That surplus will give MARTA reserves of $191.7 million – up from $143 million in the 2012 fiscal year. Auditors had predicted five years ago that MARTA would continue losing money and that it would have spent nearly all its reserves in the next several years.

Instead, the agency went losing $35 million four years ago to having a surplus of $14.7 million during its last fiscal year.

So now MARTA is working hard to show the region how well it can implement new service.

When Clayton passed its penny sales tax last November, half went to restarting a bus transit system in the county. The other half was set aside in a fund to invest in a high capacity transit system – either rail or bus rapid transit. 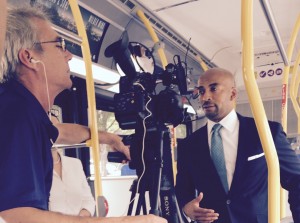 MARTA CEO Keith Parker is interviewed by WXIA about the new free wi-fi available on 50 buses. The whole system should have free wi-fi within a year (Photo: Maria Saporta)

MARTA has been in negotiations with Norfolk Southern Corp., which owns a rail line serving Clayton County, about possible options to use its corridor for that service.

“We’ve had very successful discussions with Norfolk Southern,” Krisak said. “They’ve agreed to do a study for us on what part of that corridor they could have and can we fit into that..”

The Norfolk Southern study will cost about $300,000. MARTA also is working with two other consulting firms to help in the planning and engineering for the project. It anticipates that both those contracts will each cost about $200,000.

If those studies show that it would be feasible for MARTA to put its own transit line in Norfolk Southern’s right-of-way, then the agency will conduct and analysis of the available alternatives – from heavy rail to light rail to bus.

Although the preferred option is rail, Krisak said MARTA would need to receive the the Federal Transit Administration’s “New Starts” funding to build the rail line – which means the Clayton project would receive about 50 percent of the construction costs from the federal government.

One of the bigger ticket items that MARTA has on its plate right now is a project that Parker hopes riders will never need to know about – the “Tunnel Ventilation System.”

If there were to be a fire to break out in a MARTA tunnel, this project would make sure there is proper ventilation so that riders do not suffocate from the smoke. That project alone is expected to cost nearly $200 million over the next six years, according to David Springstead, MARTA’s interim assistant general manager of capital programs and development.

“I’m one of the few people who gets excited about tunnel ventilation,” Springstead said. MARTA has about nine miles of its rail system in tunnels. “The goal is to extend the life of the system for 20 years.”