A map of the Arts Center Station property offered for redevelopment as seen in MARTA's request for proposals.

MARTA is seeking proposals to turn its Arts Center Station into a major transit-oriented development (TOD) of mixed uses and some affordable housing.

“Arts Center Station presents a tremendous development opportunity which we hope will enhance our customer experience and ridership, positively influence the neighborhood and add amenities, including affordable housing, which is so desperately needed in Midtown,” said Collie Greenwood, the transit agency’s interim general manager and CEO, in a press release.

The station occupies 6.2 acres in Midtown next to the Woodruff Arts Center. The site is bounded by Arts Center Way and West Peachtree and 15th streets. The station serves MARTA’s Gold and Red rail lines as well as the Atlantic Station Shuttle and buses operated by MARTA and Cobb and Gwinnett counties. All transit services would have to remain in operation during construction and in the new development.

An AT&T cell tower also stands on the site. According to MARTA’s request for proposals (RFP), AT&T has a lease through June 2024 that can be terminated with a 90-day notice.

The RFP launched this week and has a submission deadline of Dec. 15. It seeks “a high-quality, mixed-use, transit-oriented development, consisting of residential, retail, office and/or hotel components.” The plan also should include improving the station.

MARTA is requiring that at least 20 percent of housing units in the project be offered as affordable to households earning 80 percent or less of the Atlanta area median income (AMI). “Special consideration will be given to firms who submit proposals which exceed this goal,” says the RFP. Rents would be capped at 35 percent of a qualified tenant’s gross income or the maximum Low-Income Housing Tax Credit rent for a four-person household at 80 percent AMI — whichever is lower. 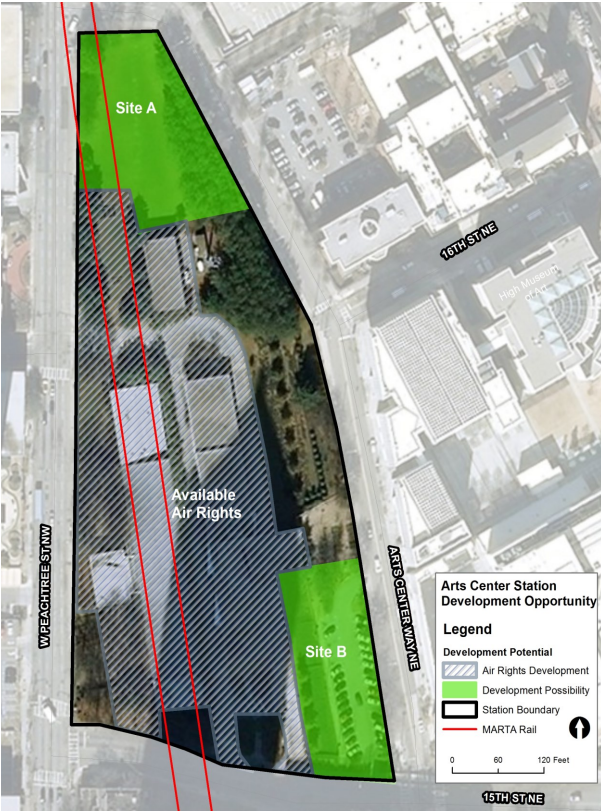 A 2017 map on the MARTA website suggests redevelopment possibilities for the Arts Center Station property. The map is not part of the RFP.

A map on the MARTA website, dating to 2017, suggests two portions of the property as suitable for ground-level redevelopment: a parking lot at Arts Center Way and 15th, and a grassy, tree-lined open space at Arts Center Way and West Peachtree. Most of the remainder of the property is suggested for “air rights,” meaning construction atop the station and its infrastructure. The map is not part of the recently issued RFP.

The property is within Special Public Interest District 16, a zoning overlay that allows for high density, no height limits except in transitional areas, and caps on the number of parking spaces, among other elements, the RFP notes.

The RFP says a deal could include a 99-year ground lease, air rights or other agreements.

The station is the seventh-busiest in the entire MARTA system, according to the RFP, with pre-pandemic ridership averaging 6,600 entries each weekday.

MARTA has a system-wide TOD strategy aimed at boosting transit ridership and raising revenue, among other goals. Recent examples include a new TOD featuring affordable housing at King Memorial Station and a deal for a new Brookhaven City Hall at the Brookhaven/Oglethorpe Station intended to anchor a full TOD project.