MARTA is seeking to hire lobbyists to help it win federal transportation funding from Congress.

Terms of the contract estimate the cost at $750,000 for a two-year base, with options for three one-year renewals. The board that oversees MARTA voted to issue a request for proposals from companies interested in the work. 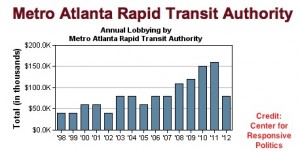 MARTA hasn’t been in hot water over its lobbying contracts in two years, not since the former head of the Legislature’s MARTA oversight committee, former state Rep. Jill Chambers, lost her bid for reelection to the House.

The current MARTOC chair, Rep. Mike Jacobs (R-Brookhaven), has said previously that MARTA’s expenditures for consulting services are an area of concern that he wants the committee to examine. However, he said, such a review would be part of a much more comprehensive look at possible fiscal controls that should be enacted through a revision of the state law that creates MARTA.

Jacobs could not be reached for comment on the pending federal consultants.

MARTA’S federal lobbyists are paid to be heard through the cacophony of special interests vying for funding.

This year alone, MARTA was among a total of 1,138 unique agencies that registered to lobby on three bills in which MARTA took an interest, according to the Center for Responsive Politics. Some of those agencies may have been lobbying on more than one proposal. 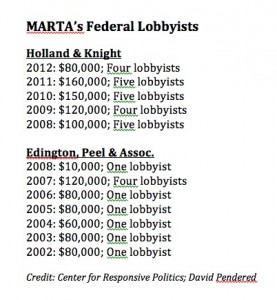 MARTA lobbyists worked on the following proposals that included provisions for transit funding: Two pieces of legislation associated with the federal Department of Housing and Urban Development; and the major transportation reauthorization bill that initially was named America Fast Forward Financing Innovation Act of 2011.

MARTA has retained Holland & Knight for the federal lobbying contract since 2007. MARTA has paid the law firm a total of $730,000, according to the Center for Responsive Politics.

Holland & Knight ranks seventh on the center’s list of top federal lobbying firms, based on billings since 1998. The company’s current list of clients include six transit entities, including major systems such as MARTA, the Metro Transit Authority of Los Angeles County, and the Sacramento Regional Transit District, and Via Metro Transit in San Antonio.

The legislation approved by MARTA’s board said the transit system needs a federal government affairs team to help win federal funding from various sources. Those include the New Starts program, which helps pay for most of the country’s new transit services; discretionary funding; and any additional new programs that can be identified.

The need for help at the federal level is clear, according to the RFP:

“Without these services, the authority is not able within current staffing levels to concurrently maintain both the requisite presence in Washington, D.C. and the kind of activity needed at the state and local levels.”

MARTA has six lobbyists registered at the state and local levels, according to the state Government Transparency and Campaign Finance Commission. Two are affiliated with MARTA and four are contract lobbyists.

The two lobbyists affiliated with MARTA include the chairman of MARTA’s board and the senior director of governmental affairs. They occasionally represent MARTA affairs to lawmakers and are required by the state to register as lobbyists.

The four contract lobbyists are: Don Bolia; Linda Hamrick; Michael Shellnut; and Joseph Daniel Young. All four have client lists that include other governmental entities, according to state disclosure records.