A rare glimpse into MARTA’s evolution was visible Sunday night when the five living former and current general managers of the transit agency gathered to reflect on the past and strategize about the future.

The occasion was the 43rd National Meeting & Training Conference of Minority Transportation Officials (COMTO) meeting in Atlanta this week.

The opening welcome reception occurred at the World of Coca-Cola, but the five general managers got together before the reception to have a private dinner nearby at Legal Seafood.

It was current MARTA CEO Keith Parker’s idea to invite his predecessors to convene for a special gathering during the conference.

“When I first thought of it, I wasn’t sure who would show up for dinner,” Parker said. “As soon as I mentioned it and asked them to come, all of them said yes.”

Parker said they ended up sharing stories and accomplishments that had occurred during their respective tenures as general managers, their views of the current state of MARTA as well as their thoughts of where it’s headed.

“They all feel good about it,” said a somewhat relieved Parker. “I was honored to be with them.” 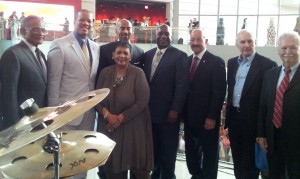 Beverly Scott, who was general manager from October 2007 to December 2012 when Parker joined MARTA, is now the CEO of Boston’s public transit system – MBTA. She described the dinner as a “really wonderful” experience.

Nat Ford, who was general manager from 1999 to 2006, is now CEO of the Jacksonville Transportation Authority, where he said he believes he’s having as much of an impact as he’s had in any previous position he’s had.

Ford was especially pleased that the Jacksonville City Council had voted 16 to 1 to extend a 6-cent per gallon gas tax through 2008. Most of the revenues from the gas tax will go to the Jacksonville Transportation Authority, but one penny per gallon will be reserved to fund road maintenance and bicycle-and-pedestrian projects.

Meanwhile, Ken Gregor, who spent 21 years with MARTA, served as general manager from 1982 to 1994. When he retired from MARTA, Gregor began taking bicycle trips around the world.

The last time that MARTA’s general managers – past and present – came together in a formal setting was in October, 2004 during the American Public Transportation Association annual meeting that was being held here almost exactly a decade ago.

The mood among the general managers was really upbeat.

“Everything is about footsteps,” she said. “It was a very special night. Like I say: ‘Don’t you dare count this region out.’”