Martin Luther King III has called on the federal Justice Department to intervene in the nation’s foreclosure situation, a call that could have the effect of energizing voters in Georgia’s gubernatorial election. 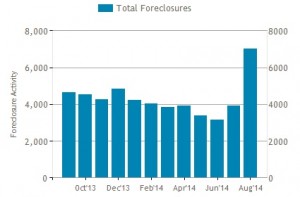 A spike in foreclosures in August resulted in Georgia ranking fifth in the nation for foreclosures that month. Credit: realtytrac.com

King issued his letter to U.S. Attorney General Eric Holder on the heels of a controversial report on the nation’s housing market by the chief economist of Freddie Mac. The report paints a fairly rosy picture of the trend line of the jobs and housing sectors, at least on the national level.

At the state level, King’s call reminds Georgia voters of home foreclosures during a campaign in which Sen. Jason Carter, a Democrat, is pressing his point that Republican Gov. Nathan Deal hasn’t done enough to help the middle class. Deal points to jobs created since the end of the great recession.

Georgia’s Senate campaign, between Democrat Michelle Nunn and Republican David Perdue, has focused less of late on jobs and the economy.

Incidentally, Georgia’s foreclosure rate ranks fifth in the nation, according to the August foreclosure report by realtytrac.com.

Georgia’s foreclosure rate of 0.17 percent is nearly double the national rate of 0.09 percent, according to the report. Georgia trails Florida (No. 1), Nevada (2), Maryland (3), and New Jersey (4).

King’s ability to reach an audience can be viewed in terms of the almost 8 million individuals reached in 2013 through his involvement in a federally sponsored program. Through churches, King helped spread the word of a federal program to help those who lost their homes to foreclosure due to certain practices, according to King’s letter to Holder. 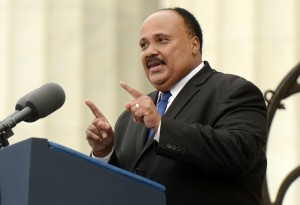 King contends that several of the nation’s major financial institutions have sought since the outset of the foreclosure crisis to block efforts that intend to help homebuyers stay in their homes. These institutions include Blackrock, PIMCO, Charles Schwab, Prudential Insurance and AEGON, according to the letter.

The relief efforts opposed by the institutions include programs to avoid foreclosure, modify loans and reduce the principal amounts.

King’s letter states that these institutions now are:

Previously, on Aug. 25, Freddie Mac’s chief economist, Frank Nothaft, issued a report on the housing market that was generally upbeat. One comment that spurred a fair amount of comment was:

Nothaft observed the string of improving jobs reports and predicted that as more people become employed, they will seek their own home. He predicts that millenials who have forestalled marriage will eventually marry and buy a home.

About 3 million households could be formed in the next few years, Nothaft contends. This number represents individuals who now share a home with parents or roommates, but want to have their own place.