The board of the Atlanta Housing Authority on Wednesday selected a master developer to redevelop the 74-acre site that once housed the former Bowen Homes public housing project.

The board approved the staff’s recommendation to enter into final negotiations with Bowen District Developers, one of the development teams vying for the project. 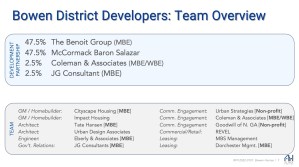 That team will serve as the “Housing Implementation Entity” in AHA’s application for a $40 million Choice Neighborhood grant from the U.S. Department of Housing and Urban Development.

“This is a transformational project for Northwest Atlanta that will bring affordable homes and a vibrant neighborhood back to the community,” said Atlanta Mayor Andre Dickens in a statement. “I’m excited that Atlanta Housing has identified a development partner and can now pursue the catalytic Choice Neighborhood grant. The City of Atlanta looks forward to partnering in the development of this inclusive neighborhood.”

The Bowen District Development team is proposing to develop 1,892 rental units with 252 at 60 percent or below Area Median Income (AMI) with assistance from the Low Income Housing Tax Credit. Another 250 units will be at or below 80 percent AMI, and 254 units will be for workforce housing (80 to 120 percent AMI.) The remaining rental units – 1,136 – will be market rate.

The proposal also includes several acres of improved greenspace, a green stormwater management system, preservation of the natural environment and an improved street network supporting a mixed-income development and 50,000 square feet of retail and 25,000 square feet for community amenities.

In December 2020, HUD awarded a Choice Neighborhoods Planning Grant to AHA to create a Neighborhood Transformation Plan for the revitalization of the former Bowen Homes and the Brookview Heights neighborhood, the adjacent Carey Park, and segments of James B. Jackson Parkway and Donald Lee Hollowell Parkway. Collectively they are referred to as the Bowen Choice Neighborhood, which is located in NPU-G, Council District 9.

“With an experienced development team and a comprehensive plan for investment in affordable housing, neighborhoods and people, Atlanta is poised yet again to be selected for a Choice Neighborhood grant,” said Larry Stewart, chairman of the AHA board, in a statement. “This project will be transformative for Northwest Atlanta and will leverage millions more in investments, jobs and opportunities for Atlanta residents.”

The development team’s plans are consistent with goals established in 18 months of consultation with residents of the surrounding community, former residents of Bowen Homes and other stakeholders in the area.

The community vision includes increasing connectivity, preserving and enhancing the natural environment, prioritizing affordability and viability and including and honoring the “memory of place.”

The authority spent more than an hour in executive session before reconvening at 3:20 p.m. to vote on the selection of the Bowen District Developers. 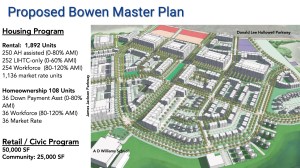 Over the next few months, the Bowen District Developers team will work with a team from AHA and the community to finalize site programming, including the total number of planned market and affordable housing units. The development team won the top recommendation from a diverse eight-member evaluation committee that carefully evaluated two short-listed proposals following an April 2022 request for proposals. Bowen District Partners was recommended as the best overall value for Atlanta Housing.

Bowen Homes was constructed in 1962 and razed in 2009. The 74-acre site is in a sparsely populated area of Northwest Atlanta bounded by Donald Lee Hollowell Parkway and James Jackson Parkway.

The development concept will transform the former Bowen Homes site into an interconnected neighborhood with retail and community amenities surrounding a new central square.

The concept plan proposes to evaluate the environmental and natural assets of the site. A pedestrian green street and a linear stormwater park will weave through the site from east to west, creating green infrastructure to reduce flooding.

The A.D. Williams Creek Trail will connect to the residential development and surrounding community assets. AHA and the City of Atlanta will further work with Atlanta Public Schools on the revitalization of the A.D. Williams school site as part of the redevelopment.