Ms. Mattie King Ansley Jackson, a grassroots leader of Peoplestown who for decades went toe to toe with Atlanta City Hall and was known as the “Mayor of Summerhill,” died Saturday. She was 98.

Her neighbor and ally in her last battle with City Hall, Tanya Washington, confirmed Jackson’s death.

Jackson only lived in Peoplestown because the city changed the lines between it and Summerhill, not because she moved, Jackson said back in 2015 when she explained why she was stepping back into public life.

She spoke up because the city of Atlanta wanted to buy up her whole low-lying block, demolish the homes, and dig a stormwater detention pond that would double as a park.

But Jackson said that her house had never flooded. And that Summerhill was where she belonged. By then in her 90s, her mind went back to days of sewing and cooking biscuits. She said she’d helped raise thousands of Summerhill children, cooking for them and making clothes.

But the mother of eight wasn’t all sweet grandma.

One root of her community’s problems was the Atlanta-Fulton County Stadium, opened in 1965 and surrounded by a sea of parking lots that replaced homes and businesses.

Decades later, Jackson would recall to the Atlanta Constitution that her family had been ousted from a rental home so that the lot could be paved for the stadium. For years, the neighborhood dealt with their streets being closed or clogged by people parking for stadium events.

She would say the community had been “raped” by that stadium.

In 1970, when an Atlanta police officer shot and killed 15-year-old Andre Moore in Summerhill, Jackson was a person who could get into a meeting with then-mayor Sam Massell, brokered by businessman Jesse Hill. There was unease in the neighborhood. A liquor store had been firebombed.

Jackson asked Massell to open his heart and come meet with the young people of Summerhill.

The next year, as a U.S. Senator made a fact-finding tour of “slums,” Jackson is quoted by a reporter telling the D.C. delegation that those in power “don’t want the poor to come up.  They just give enough to make the poor think they have something.”

She and other community leaders lambasted the media in 1972 for making her neighborhood look like a murderous jungle. She pointed to an Atlanta Constitution article that had an Atlanta police officer shot and killed in Summerhill. 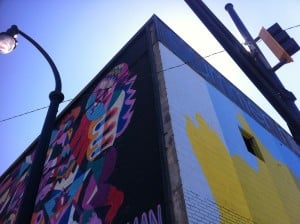 The article called the neighborhood “Summerville.” The shooting actually happened at Boulevard and Memorial. That might be Cabbagetown or Reynoldstown depending on which corner. But it’s not Summerhill.

She accused the police of being indifferent to danger for Summerhill folks, to the point of ignoring an Easter Sunday domestic violence call.

“We’re trying to build this community up, not tear it down, Jackson told The Atlanta Voice in spring 1972.

By then she’d been a local leader in organizations that came out of President Lyndon Johnson’s War on Poverty, like the Model Cities program and Economic Opportunity Atlanta. Neither group exists today.

In 1991, Jackson was named to the Atlanta Committee for the Olympic Games.

Some worried that the resident voice on the Olympics preparation committee would too easily be drowned out by an establishment looking to install — stop me if you’ve heard this one — a stadium.

Afterward, Jackson declared that Summerhill had been saved from the Olympics — some new housing, some renovations, some public works.

But only because residents organized, she told the Atlanta Constitution in early 1997.

The last public team she joined was the one looking to save a Summerhill block.

Jackson said her house had never flooded and wasn’t interested in selling out to the city, which wanted to raze every house on the block and put in a park-and-pond that would soak up stormwater surges. Even in her 90s, she came to City Hall to say so, and spoke to the reporters who visited her porch.

Presentations from the city of Atlanta show photos of the general area knee-deep in water. Some on the block had claimed flood damages from the city.

But Jackson’s house is still there. Washington still lives there too, as do Robert and Bertha Darden. Washington and the Dardens are fighting the city’s attempted use of eminent domain to get their homes and say their houses don’t get flooded either.

The remaining residents point to city records that say that the case for a Summerhill pond isn’t made. And they see a city that’s just installing an amenity that will make Summerhill too expensive for legacy residents.

Washington said that Jackson was cut from the same cloth as the late John Lewis and C.T. Vivian.

“Principled and committed and courageous and not afraid to speak truth to power,” Washington said.

Back in 2015, Jackson said it was wrong for the city to try and move an old person and she didn’t think God would let it happen to her.

If the Lord works in mysterious ways, you might discern His hand in a 2015 announcement from City Hall, when then-mayor Kasim Reed announced the city would re-design the pond around Jackson’s home.

But it didn’t hurt either that she had decades of experience staring down City Hall, getting media attention and building coalitions. This time her team included the next generation.