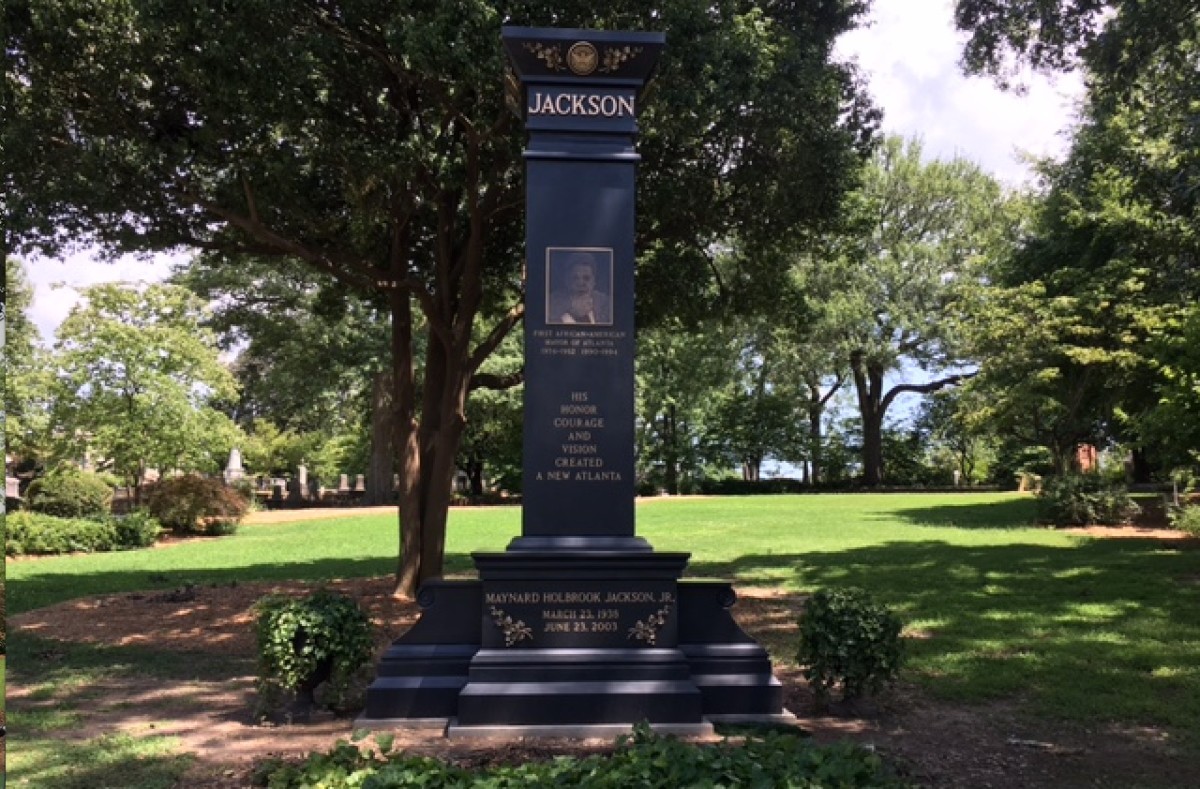 The widow of former Atlanta Mayor Maynard Jackson’s family has unveiled a monument at his burial site in Atlanta’s Historic Oakland Cemetery – a 14.5-foot black obelisk made of honed granite from Africa. 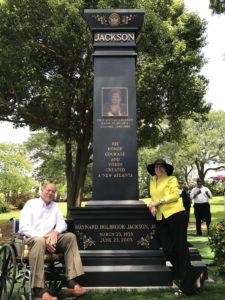 “My ultimate goal was to build a fitting monument to this exceptional man, which will stand for centuries to come,” Valerie Richardson Jackson, widow of the former mayor, said in a statement.

The monument was dedicated on June 23, the 14th anniversary of Jackson’s death in 2003. A group of family and friends gathered on a warm Friday to celebrate Jackson’s life and this new recognition of his lifelong efforts in arenas including electoral politics and minority access to business opportunities.

Plans for a public dedication are still in the works. The private dedication concluded with two of Jackson’s favorite refreshments – ice cream and lemonade.

The front of the monument has the seal of Atlanta at the top. Next is the name, JACKSON. Jackson’s image follows, with his chin resting between thumb and forefinger of the right hand. Then these words: “First African-American Mayor of Atlanta 1974-1982 1990-1994.”At the midpoint, the following words are inscribed:

The base of the monument states the names and years of life: 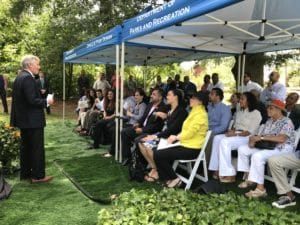 Each facet of the monument’s crown are marked with four aspects of Jackson’s legacy: the City of Atlanta; the scales of justice; the Olympic rings; and Hartsfield-Jackson Atlanta International Airport.

One side of the statue bears lines from a poem by Ella Wheeler Wilcox. Wilcox may best be known for penning the line, “Laugh, and the world laughs with you; weep, and you weep alone. For Jackson, the beginning of the poem, “Will,” is inscribed:

Ms. Jackson observed that the poem speaks of the type of strength her husband displayed.

“One of Maynard’s notable attributes was his strong will and determination,” Ms. Jackson said. “The poem speaks of a determined soul, and it was only through Maynard’s determination in moving I-85 that a new airport terminal was built with minority as well as female participation.” 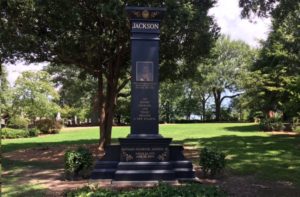 The monument at Maynard Jackson’s burial site is flanked by ivy, a symbol of strength, endurance and determination. Credit: Pamela Henman.

On a personal note, Ms. Jackson said the monument is a tribute to the love and devotion she and Jackson shared for more than a quarter of a century. This, in addition to the public persona whose determination still influence politics and political discourse in Atlanta.

Of passing note, there’s a coincidental connection between the former mayor and the company that created his memorial.

The company was formed in 1898, opening in Ball Ground and moving in the early 1900s to a storefront along Ponce de Leon Avenue, according to a report on the company’s website.

In 1897, Jackson’s grandfather, John Wesley Dobbs, moved to Atlanta to study at Atlanta Baptist College, which later became Morehouse College, according to a report on georgiaencyclopedia.org. Dobbs and Ophelia Thompson were married in 1906, about the time the monument company was relocating to Atlanta. One of the couple’s six daughters, Irene Dobbs Jackson, was Jackson’s mother.

Note to readers: C-SPAN has posted 22 videos of presentations by Maynard Jackson. 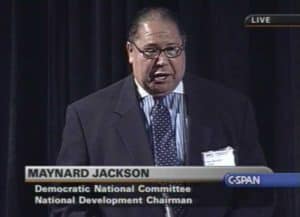 Maynard Jackson served as chair of the Development Committee of the Democratic National Committee near the end of his life. Credit: c-span.org

Photo Pick: Sunday in the cemetery by Kelly Jordan
Britton Edwards October 2, 2017 8:57 am

Photo Pick: Sunday in the cemetery by Kelly Jordan