In an unusual turn of events, Atlanta Mayor Kasim Reed and his staff Friday presented a possible compromise on the proposed alignment of Martin Luther King Jr. Drive around the new Falcons stadium in an effort to satisfy concerns expressed by members of the Atlanta City Council and members of the community.

Councilmember Andre Dickens, had led a unanimous Council effort seeking to preserve the “connectivity” of Martin Luther King Jr. Drive on both sides of Northside Drive. He asked the mayor and his administration to present alternatives that would maintain that connectivity rather than have MLK be turned into the much narrower Mitchell Street west of Northside Drive.

So Dickens called a meeting Friday morning where the mayor presented a new set of plans — one that looked similar to an alternative the Falcons had rejected earlier in the process.

(One interesting twist is that Reed and Dickens could not have been more cordial with each other — Reed had campaigned enthusiastically against Dickens in favor of incumbent Councilmember Lamar Willis, who lost his seat in November).

“My staff tried to address the concerns raised by Council,” Reed told the specially-called meeting. “We said we will look at the map and the physical design constraints of the south site.” 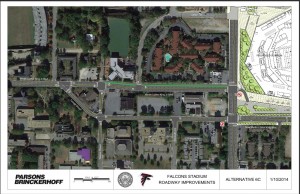 Current design shows how Martin Luther King Jr. Drive would continue on Mitchell Street rather than reconnecting with MLK at Northside Drive. (Click to enlarge)

The presence of the MARTA tunnel has made it necessary for the Falcons to situate the new stadium as far south as possible on the  site. It also caused stadium designers to change the planned road design of MLK from circling back around the stadium to reconnect to MLK at Northiside Drive to just having MLK go straight along Mitchell Street for several blocks before reconnecting with MLK at Tatnall Street. The plans to disconnect MLK have been widely criticized by the community.

The plan that the mayor presented on Friday would have MLK swerve like an “S” back up to MLK just west of Northside Drive. It would require having to buy a portion of parking lot of Central United Methodist Church. The mayor said that solution could provide “an acceptable level of service,” and it could be a solution that all of the parties could find consensus. But he said he had not run it by the Atlanta Falcons or the Georgia Department of Transportation.

Richard Mendoza, the city’s commissioner of public works, said the proposal estimated that this alternative would cost about $1.2 million to acquire additional right of way, that there would have to be a barrier wall between 15 and 20 feet high for public safety that the neighborhood might find it aesthetically unappealing. He said the overall additional cost of this option would be nearly $8.1 million.

Councilmember Michael Julian Bond was concerned that the option still did not include a left turn lane from Northside Drive going north to MLK going west.

Councilmember Yolanda Adrean thanked the mayor for being responsive to Council’s request.

But Reed reminded Council that several hurdles remained to get Option “S-C” adopted. It would require approval of both the Falcons and GDOT; it would require successful negotiations with Central United Methodist Church; it would require figuring out how to cover the additional costs; and it would require that all of the issues be resolved within the project’s time schedule.

Before going forward with trying to answer those questions, Reed said he needed to know whether City Council was on board with this option.

Dickens said it was “definitely in line” with what he had in mind.

Atlanta City Council President Ceasar Mitchell asked that if the administration could develop a couple of back-up plans in case one of the hurdles became a problem. That way Council and the community would not be staking all its hopes on a new realignment on just this one plan.

After reviewing a map of the possible new design, Spelman College President Beverly Tatum seemed pleased with what she saw.