Mayor Reed to work to keep city ‘equitable’ in 2016

Building an equitable Atlanta will be a central theme of Mayor Kasim Reed’s administration in 2016.

Reed disclosed his commitment to making “sure Atlanta is a place for all us,” during an editorial board meeting with Atlanta Business Chronicle on Feb. 2.

Equity was among several topics Reed discussed during the meeting. Other issues included: 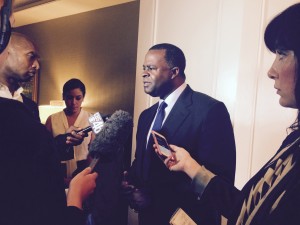 A possible residential development next to Philips Arena, which will be undergoing a major public-private retrofit;

The ongoing 20-year lease negotiations with Delta Air Lines Inc., which would include the airline’s commitment to keep its headquarters in Atlanta;

The gravitational growth that is bringing more development to the city — especially around MARTA’s transit stations;

And, the mayor’s strong endorsement that MARTA needs to collect an extra half-cent sales tax in Atlanta and Fulton County so that it can expand its reach.

All of those issues, however, are related to making sure Atlanta becomes a more equitable city.

Atlanta ranks No. 3 in the nation for income inequality, according to a 2016 study from the Brookings Institution. It had placed No. 1 in a 2015 study.

Reed said he is considering a number of options to help make Atlanta more equitable, such as establishing a minimum affordable-housing requirement on any project that receives city financing. Reed mentioned that the requirement would be at least 10 percent.

The city’s planning department also is considering sweeping changes to its zoning guidelines, and some people have proposed that inclusionary zoning be part of the new standards. The mayor said he’s reviewing a host of options that city officials could implement.

“Yes, I am studying a series of proposals and deciding what to do,” Reed said. “But we are definitely going to do something about this.”

Reed said the trends in Atlanta are similar to those happening in cities around the world. “The bottom line is the world is moving toward cities and that trend isn’t going to stop, certainly between now and 2050,” he said.

It will be up to the city to make sure that future growth does not displace current Atlanta residents who might not be able to afford to live in the new developments that are planned.

Because of the recent agreement between the city of Atlanta and the Atlanta Board of Education over the Beltline revenues, it will unlock new development potential. Reed said the agreement also provides consent for investing $60 million in the Eastside Tax Allocation District. “That’s going to provide a significant amount of leverage for development on the Eastside,” Reed said.

About Philips Arena, Reed said he is “reasonably confident” that a long-term deal with the Atlanta Hawks at Philips would include a “companion real estate project” that likely would add another residential development downtown.

“What I am saying is there is definitely interest in a residential development near where the Hawks facility is, and that it would be part of a pretty strong trend,” Reed said, of more people opting to live in the city.

The mayor also said the city is about 85 percent done on the 20-year lease negotiations with Delta, and he expects an agreement in weeks if not days.

“In the next five years, Hartsfield-Jackson will spend more money than it’s spent in the history of its operations,” Reed said of the $6 billion plans. “Everybody knows that Hartsfield-Jackson is the biggest driver of our economy. Period.”

“The business community is going to be the arbiter of transit in the region because that’s the way transit is going to be pulled from politics,” he said. “Listen to State Farm, Mercedes-Benz, Carter’s, NCR, Kaiser. All of the major jobs announcements are near rail.”

That’s why Reed said he is supporting MARTA’s efforts to get another half-penny sales tax in Fulton County, although a couple of North Fulton mayors are not in favor of expanding MARTA rail up Ga. 400 and would prefer up to a full penny that would go primarily to roads.

Reed said he is going to do everything he can to push funds for MARTA to create a “real transit system in our city,” because of what it would mean for job creation and building a more equitable city — which he said is part of Atlanta’s DNA.

“There is a reason the city of Atlanta has been able to navigate some pretty tumultuous times, and the reason isn’t me,” Reed said. “I think we’ve always paid more attention than other cities to how we get along with one another.”