One legacy Mayor Kasim Reed is to leave for his successor is the potentially thorny issue of Confederate monuments and street names. If the experience of New Orleans replays in Atlanta, the issue could roil for years to come. 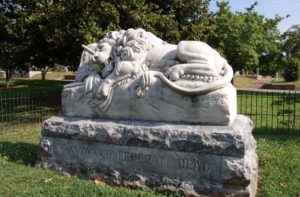 In the city-owned Oakland Cemetery, the Lion of Atlanta statue portrays a dying lion resting on a Confederate battle flag. It was installed in 1894 to honor the Unknown Confederate Dead. Credit: panoramio.com

Reed has explicitly requested the city’s advisory committee on Confederate icons to submit its recommendations to him by the end of the week starting Nov. 26. Reed outlined options to the committee that include taking no action on the fate of icons, taking decisive action, and adding icons that would elaborate on the story told by the Confederate remembrances located on city property within the city limits.

Even with the aggressive deadline Reed cited, the mayor barely will have time to ask the Atlanta City Council to support anything he may propose. The council’s final meeting of the year is slated for Dec. 4. In January, a new mayor, council president and council members will be setting the city’s agenda.

Committee Co-chairperson Sheffield Hale observed at the inaugural meeting, on Oct. 18, that the committee’s work likely will extend after any recommendations are delivered to Reed.

“The issue won’t end with us,” Hale said of the committee that is to dissolve after delivering its recommendations.

Committee members indicated they are interested in setting forth a set of guiding principles for evaluating icons that is to, “facilitate open and transparent conversation,” observed committee member Sonji Jacobs Dade.

In New Orleans, the conversation over the fate of four Confederate monuments could be described as full-throated, and litigious. Like the simmering support for the Lost Cause itself, self-described heritage groups continued litigation after a federal court seemingly ended the debate. 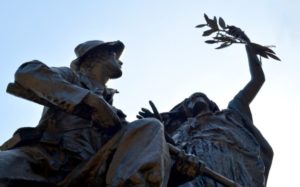 The Peace Monument, in Piedmont Park, has been marked by some in Atlanta as ripe for removal. Part of its original aim when unveiled in 1911 was to support national unity. Credit: wanderlustatlanta.com

On March 6, the U.S. Court of Appeals for the Fifth Circuit, in New Orleans, issued a ruling that rejected a lawsuit filed in 2015 by three historic preservation associations and a local chapter of the Sons of Confederate Veterans.

The main thrust of the lawsuit was that the monuments were integral to the city’s transit system. Routes had been established to transport folks who wanted to visit the four monuments, according to the case. The city was almost an afterthought in the original lawsuit.

The first defendant was the U.S. transportation secretary, followed by the Federal Transit Administration, the U.S. Department of Transportation, and the New Orleans Regional Transit Authority. At the bottom of the list were the entities that had pressed to have the monuments removed – Mayor Mitchell Landrieu and the City of New Orleans.

On May 20, the last of four monuments were removed, a statue of Gen. Robert E. Lee. The city previously had taken down the Liberty Place monument, an obelisk near the French Quarter that commemorated a white supremacist attack on the integrated police force; a statue in the Mid-City area of Jefferson Davis, president of the Confederate States of America; and a statue near City Park of Gen. P.G.T Beauregard.

Nonetheless, on May 22, 11 weeks after the case was decided, Charles Lincoln III filed a motion that sought to intervene in the proceedings. In an effort to prevent the removal of the statues, the motion said New Orleans could qualify as a World Heritage Site. The four monuments would be essential to qualify, according to the paper.

Lincoln, whose website says he now resides in Los Angeles, describes himself as a, “Texas-born Don Quixote of Anglo-German origins” with an, “Anglo-Viking spirit of freedom, and a fierce Latin-Mediterranean passion for trust and justice.”

One of the four original plaintiffs filed a motion to support Lincoln’s notion that the monuments were central to New Orleans becoming a World Heritage Site. This one was filed July 7 under the banner headline, “Save NOLA Heritage Using Monuments to End Modern Day Slavery.”

Here’s a taste of language in the motion:

A judge dismissed the matter this summer, noting that the appellate court had ruled.

The fate of the four New Orleans’ monuments remains unclear. Although they have been removed, the question of what becomes of them has not been decided, according to a May 19 report by washingtonpost.com.

Likewise, the fate of Atlanta’s Confederate monuments and street names is to be determined by a panel of 11 citizen volunteers who are to submit their recommendations to the mayor the week after Thanksgiving.

As Reed told committee members in his introductory remarks: