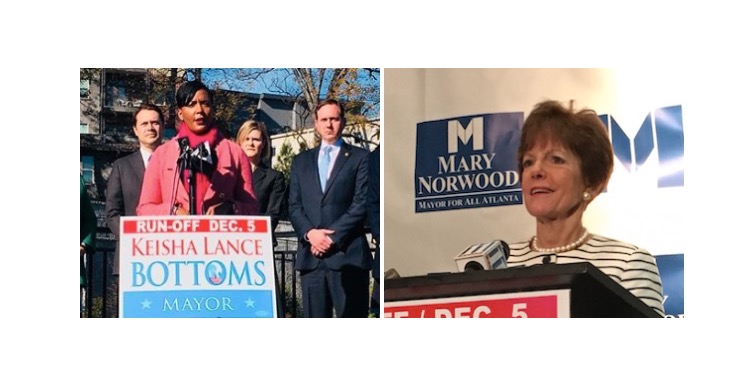 On a cold Monday in Atlanta, the mayor’s race is getting hotter: Keisha Lance Bottoms started the day with official endorsements from some Atlanta Democrat heavyweights. In the afternoon, Mary Norwood released her several years of her tax records and challenged Bottoms to do the same.

And in between, the two both took turns with their late-campaign stump speeches and answering questions at a gathering of perhaps two dozen clients and staff of the Downtown branch of Dentons, the international legal and lobbying mega-shop. 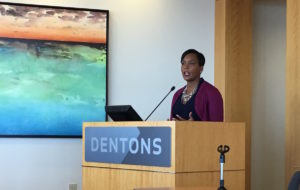 With some of them standing by her, Bottoms said she’s thankful to have the support of people “who share the values that we as a city hold so very dear, those are really core Democratic values.”

Bottoms didn’t mention Norwood when she talked about Democratic values, but the Democratic Party of Georgia regularly does mention Norwood and party; it’s running a campaign that labels her “Mary the Republican.” (Norwood says she’s an independent and has voted both sides of the aisle.)

Downtown at Dentons an hour or so later, Bottoms touched on her family story, which she frequently references on the campaign trail: of how a descendant of enslaved people now sits at the tables where big decisions are made in Atlanta.

Bottoms said her message is the same as it was at a March Dentons forum.

“That is, what are we doing for our communities?” said Bottoms.

She told the assembled attorneys, businesspeople and others that she has a deep and sincere appreciation for the progress the city is making and for folks that come to the city and do business, but also “an appreciation for what it means for the people who will come in after we leave and empty the trash and clean up after us. These are the communities that we are taking about and the people we’re talking about when we talk about making sure that our communities are not being left behind.”

Several of the questions at Dentons —for both women — were about city permitting.

Bottoms said she aims to set up an office of business constituent services — like the regular constituent services help desk, but with staff ready to take business-scale questions. Other priorities in her first 100 days she mentioned: an audit of the procurement process; to name a blue ribbon panel to check on Atlanta’s affordable housing inventory and help the city move toward buying some; and to start meaningful dialogue with Atlanta Public Schools, including by hiring a full-time person to work on education partnerships.

“I think it is critically important that we have a mayor … who is absolutely transparent, absolutely accountable, when we’ve got one of the biggest corruption investigations in our city’s history. And the U.S. attorney says that … corruption is prolific Downtown. This is not the way to run the city. … I will be the clean break,” said Norwood.

She didn’t mention Mayor Kasim Reed, and he has not been accused of wrongdoing, but the wrongdoing did occur during his term. Reed has endorsed Bottoms and the two have been political allies. (Bottoms has called Reed a friend and colleague but said that in January, there will be a new mayor.)

Norwood said that some of her first priorities for the first 100 days in office would be to get city finances in order, put transportation front and center, and work on compensation plans to keep first responders and others on the city payroll, among other things.

And she pushed back against criticisms that have ended up in places like the state Democrats’ page: that Norwood has refused to denounce Donald Trump and that she didn’t endorse Democrat Jon Ossoff in his ultimately unsuccessful congressional race against Republican Karen Handel. The page features a photo of Norwood and Handel together. 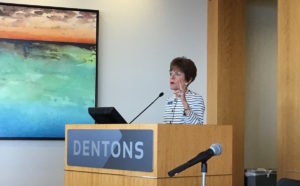 Norwood said that she has been “called on the carpet” because she will not denounce an individual — though she didn’t name Trump. She said she will denounce behavior that she feels is inappropriate anywhere, anytime.

But she said as mayor, people will be looking to her to get things done on both the state and federal levels.

“So the less bridges I burn now the better,” said Norwood.

She also addressed “a picture,” but didn’t name Handel.

“I know people in D.C.; there’s a picture going around that some of you may have seen, but I will have a picture with everyone who can be helpful,” said Norwood.

About an hour later, at her north headquarters in Buckhead, Norwood passed out copies of tax records showing her family income and that of her Norwood Communications, LLC over about eight years (handout in a large PDF). Norwood challenged Bottoms to release her own tax records, in the name of transparency.

“[My husband and I] live within our means, we pay our bills, we have no tax liens, no property liens,” said Norwood.

Bottoms does have a history of not paying her full water bills, once for as long as two years. She’s said that some months she overpays and some months the city has overcharged.

Bottoms, in that morning Old Fourth Ward press conference, said she would speak to her accountant and see what documents are readily available. She said she didn’t have any issue with releasing her tax information.