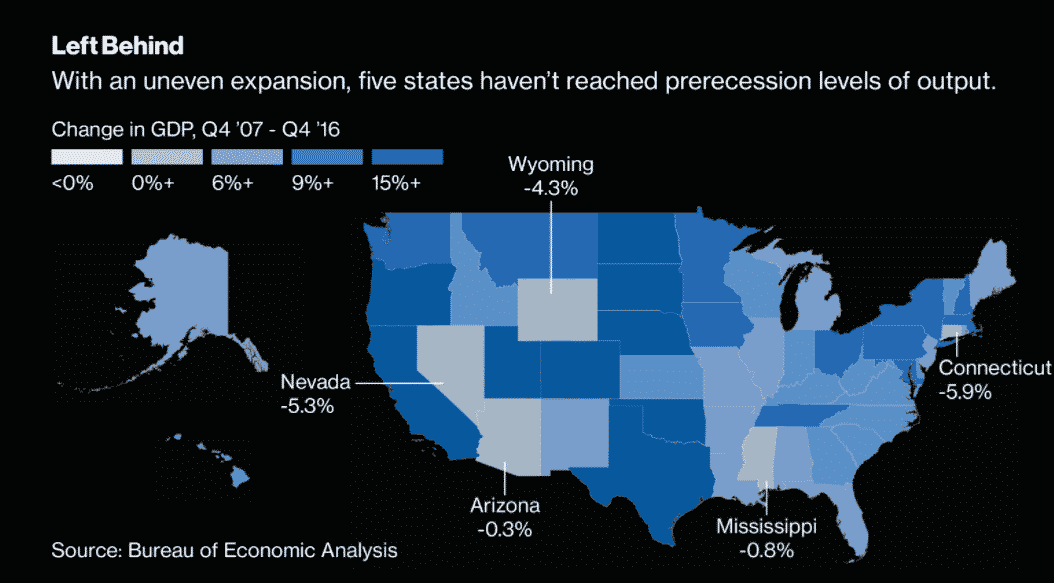 Two recent surveys offer us a way of cross-referencing the position of our city and region at a promising but precarious moment.

A ranking of the states by how well they’ve rebounded from the 2008 recession paints a picture  of a very uneven recovery.

Mark Zandi, chief economist at Moody’s Analytics, said the recovery is being driven by the nation’s largest metro areas.

“Metro areas have attracted millennials and boomer empty-nesters and are globally oriented, benefiting from global capital inflows. Rural economies that are dependent on commodity-based activities have suffered,” Zandi said.

It’s striking that every one of the states still lagging in GDP borders at least one state which has rebounded by 15 percent or more. The Desert West and the Mississippi Valley are areas of obvious weakness, but the recession and the long recovery have turned the map into a patch quilt.

Georgia turns up somewhere in the middle of all this, trailing Tennessee in signs of recovery but ahead of Florida and Alabama. Apparently due to a sharp increase in housing values, Macon-Bibb turned up earlier this year in a list of most-recovered cities, https://wallethub.com/edu/most-least-recession-recovered-cities/5219/ But the big reason the state’s not shaded more like Alabama, or even Mississippi, on that recovery map is that it has the Atlanta metro area as a generator of economic activity.

So how’s that going? The management consulting firm A.T. Kearney attempts to answer this question every year with its Global Cities Index and Global Cities Outlook rankings. The 27 metrics that go into the Index are designed to measure the “perfect” cities, from a global business perspective. The Outlook looks at 13 metrics to determine the “fastest” cities. We’re better at fast than perfect.

This year’s results were a mixed bag for the International City (we do still call ourselves that, don’t we?). Atlanta ranked 38th among the world’s cities in the Global Cities Index, and 17th in the Global Cities Outlook. Not too shabby — I’m pretty sure we don’t still say that — but it’s an 11-city drop from last year, when Atlanta’s outlook was ranked 6th in the world.

The rankings tend to bounce around — Atlanta had climbed to 6th place from 16th the year before — and it isn’t immediately clear how we may have stumbled. The indexes measure everything from population with tertiary degrees (Tokyo is tops) to museums (Moscow) to patents per capita (San Francisco).

But when the contest is about being swiftest, we can’t be complacent for long. This is a global economy, primed for speed, where the stakes are very high.

With the expansion of shipping through the Panama Canal in Savannah, this global tilt isn’t going to become any less pronounced, no matter how government policies change. Atlanta pointed itself at the world years ago, and Georgia followed.