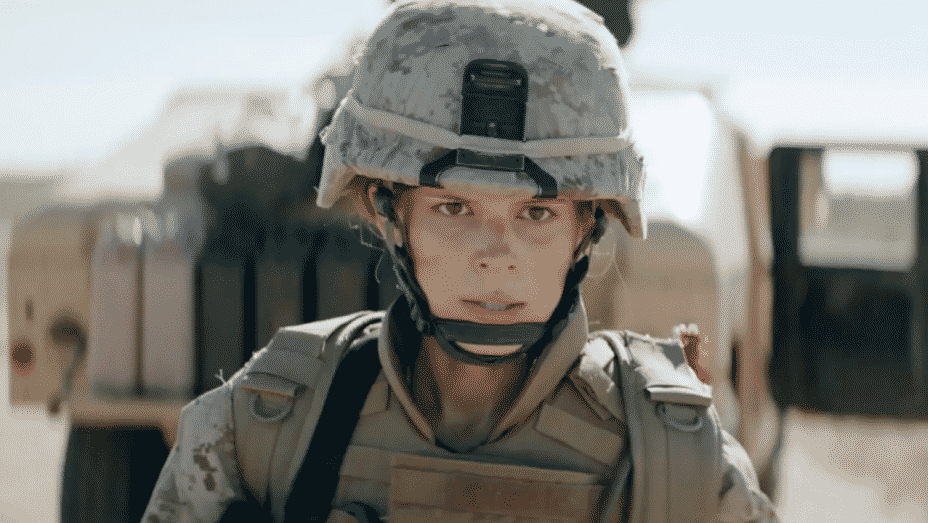 Share1
Tweet
Share
Pin
Pocket
WhatsApp
Buffer
Email
Reddit
1 Shares
By Eleanor Ringel Cater
“Megan Leavey” had me at “Woof.”
Based on the true story of a Marine and her bomb-sniffing dog, the movie is a well-told weepie, especially if you’re a full-blown animal lover (Full confession…me).
Megan (Kate Mara) has a dead-end job and a deadbeat mom (Edie Falco) in a deader-than-dead town.  There’s nothing keeping her in this Rust Belt corner of hell, but she doesn’t have any place she especially wants to go. 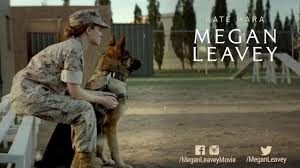 ‘Megan Leavey’ – a story of a Marine and her dog (Special: Megan Leavey movie)

So she opts for a different corner of hell: Iraq. She joins the Marines and somehow ends up cleaning cages for the canine unit that trains dogs to sniff out bombs. On a good day, she gets to dress up in a puffy body suit (think, Ralphie’s little brother’s snowsuit in ”A Christmas Story”) so she can be mauled by said dogs.
The worst of the lot is Rex (Varco), a muscular German Shepherd with anger management issues. Translation: he bites anyone or anything he can get his teeth on.
Human screw-up meets canine screw-up and…well, that’s the rest of the movie.
Shipped overseas, Meagan and Rex prove to be a highly effective and singularly courageous team.  But inevitably, they run into one bomb too many and they’re sent home. And separated. Though she returns to civilian life (albeit with a Purple Heart), Meagan is determined to get Rex back once he’s retired.
However, military red tape is not on her side and that’s, well, the rest of the rest of the movie.
Director Gabriela Cowperthwaite made the much-acclaimed documentary, “Blackfish,” which pretty much upended Sea World’s, well, world. She brings a similar no-frills approach to “Megan Leavey.”
This mostly works to the movie’s advantage. We’re not distracted by issues like sexism in the military or the rights-and-wrongs of the Iraq war. That also means Cowperthwaite can put us on edge. The scenes showing Megan and Rex at work are excruciatingly tense; “The Hurt Locker” comes to mind. 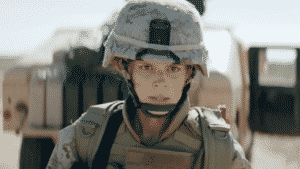 Further, the picture has a welcome sense of humor. When Megan asks her commanding officer (Common, rather good) if he can assign her a dog to train, he gives her a leash attached to a tin can, which she dutifully takes on an obstacle course.
Still, there are some jarring transitions. Rex goes from arm-crusher to face-licker pretty quickly. And we don’t get enough time with the pre-enlistment Megan to fully understand her isolation, her depression, her need to be useful somehow somewhere.
Teeny-tiny Mara has the same don’t-underestimate-me self-assurance that teeny-tiny Sally Field had in “Norma Rae.” And Varco has unmistakable movie-star charisma. He’s Rin Tin Tin handsome, with a Cujo attitude (Side Note: like the slavering Saint Bernard who played the deadly dog in the Stephen King movie, Varco can’t help but wag his tail, even when he’s supposed to be terrifyingly vicious)
W.C. Fields famously said you should never act with children or animals. “Megan Leavey” proves him wrong.
A final factoid: Did you know these dogs have a higher military ranking than their handlers? Well, they do.  Leavey is a mere corporal and Rex is a sergeant.
As it should be, I think
Share1
Tweet
Share
Pin
Pocket
WhatsApp
Buffer
Email
Reddit
1 Shares
Tags: