The memory of Madam C.J. Walker lives on in an Atlanta museum and new hair product line 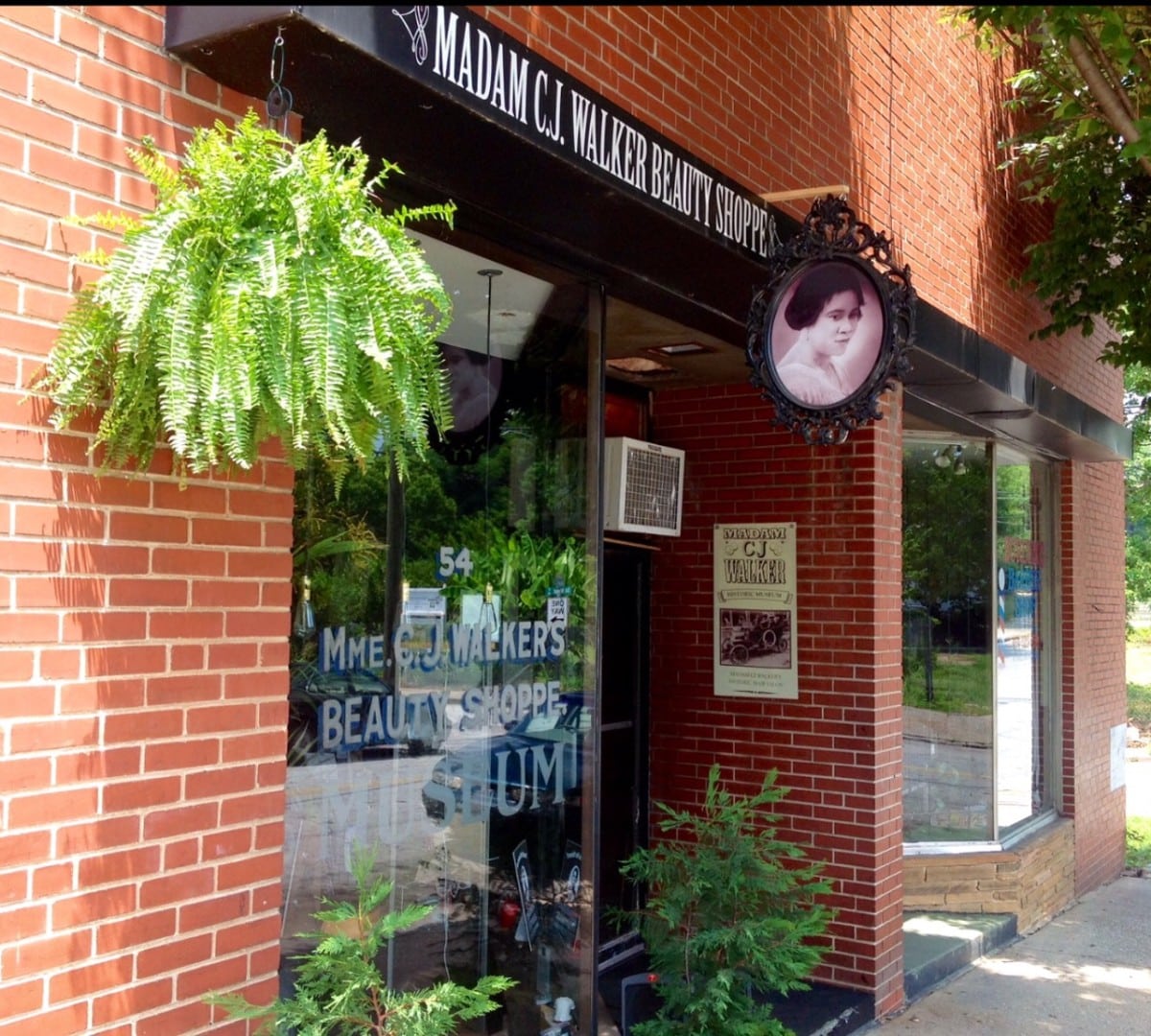 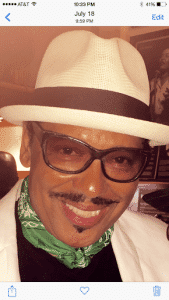 Ricci de Forest is a Madam C. J. Walker devotee and curator of a small Atlanta museum that honors her legacy.  That’s why he is so pleased that the name and history of the woman who “is credited with being the grand dame of the Black beauty industry” is being revived with the launch of a new line of hair products in her honor.

“I’m more of a preservationist,” says de Forest, a popular hair stylist whose Hilliard Street salon also houses a vintage collection of jazz music from the nation’s first Black owned radio station WERD –AM.  “I co-exist with this period of time and it’s always been that way.  I have a social, cultural and moral obligation to keep this little cultural canoe going until it becomes an ocean going museum.” 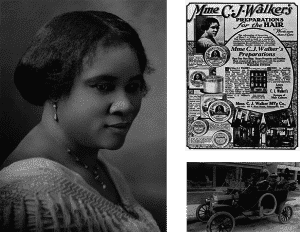 “I am delighted,” says de Forest, who opened his museum and salon 12 years ago.  “Just to have her name out there is a good thing.  I am hoping they are true to the legacy because this space is a living manifestation of the Walker legacy.  And because it is still functioning as a Madam C.J. Walker beauty shop, it still has her heartbeat.  We bring some spiritual weight and integrity to what they are doing.”

“It’s great,” adds A ‘Leila Bundles, a journalist, author and great, great, granddaughter of Madam C.J. Walker. “I have been writing about her for 40 years now so if Sundial is successful this will elevate the brand of Madam C.J. Walker.  With the range of products they are offering there seems to be something for everyone’s texture of hair so I couldn’t be happier.

Ricci de Forest has been one of Atlanta’s most trendy Black hair care artists 30 years, having previously owned a salon on North Highland Avenue over near Blind Willies in the Virginia Highland area.

“I was over there a long time before it became really popular with the yuppies and buppies,” he says.  “It was upscale at the time.  I was considered a high end stylist because I was global. I was traveling for various cosmetic companies, teaching training techniques and working all the international trade shows.  I guess Atlanta’s African American female elite migrated to my high profile salon and we delivered. We had a skill set with cut, color and chemicals.” 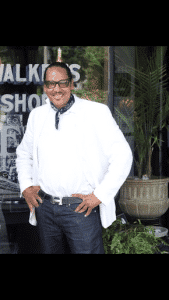 When his lease expired, he decided to move to the corner of Auburn Avenue and Hilliard Street in the Prince Hall Masonic Lodge building that had originally housed the Southern Christian Leadership Conference, WERD radio and a Madam C. J. Walker beauty shop.

“I got this space based on knowing the legacy of Madam C.J. Walker and knowing that script on the window when I saw it 30 years ago was correct to the period of the ‘50’s,” says the 63 year-old de Forest. “You could see the ink and the style of it.  That’s the original logo on the glass. When I got the lease, that’s when I stumbled on the vintage artifacts that were left in here.  And, I knew that the artifacts in here were original to the space which meant that the Walker agents that used to work here probably used those tools.”

He continues, “I met the last living agent that used to work in this place.  She told me that these were the tools they used when she started doing hair here in the ‘50’s, and a shampoo and press was 25 cents. You would learn the Walker system, and then you would go out and open a salon as a Walker agent, buying the products and using the Walker system of doing hair.” 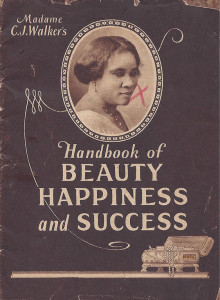 Madam C. J. Walker is credited with being the top earner and leader of the Black beauty industry during that era but there were multiple Black women beauty pioneers in competition with one another.

“But the absolute beginning starts with Annie Turnbo Malone who had the first school of cosmetology for the study of Black hair in North America,” says de Forest. “She had a global brand.  Walker was a student at her beauty college in St. Louis.  What Walker did was take the existing system after graduation and take it to another level.  She had a better marketing strategy.”

Madam Walker and others of her ilk shortly after the turn of the century were often referred to as “race women.”  They pre-dated the civil rights era of activism.  They financed a range of racially sensitive causes. This cadre of Black hair care entrepreneurs owned virtually 100 percent of the industry in those early days.  This new product line, as de Forest sees it, continues Madam C. J. Walker’s legacy of women’s and economic empowerment 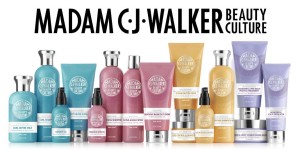 employment for women during a period in which Black families could not penetrate the economic stratosphere of mainstream society because of racism,” de Forest opines. “These women were able to provide employment which provided the next generation the opportunity to go schools of higher learning.  Any doctor or lawyer or any kind of Black professional, if you go back two or three generations someone was doing some hair.  And, that hair provided a financial avenue for the next generation to move on.  It goes back to even Madam C.J. Walker.  The money she made allowed her to have her daughter become educated.  Their whole system was set up to bring up a generation of African Americans.  And part of their system was to divide the business in thirds—one-third for myself, one-third for the company and one-third for the cause.” 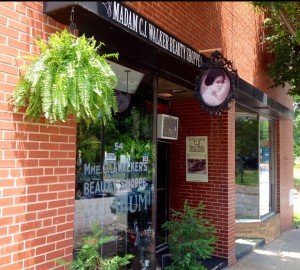 Madam C. J. Walker represents all that is possible, according to her biographical sketch. Sarah Breedlove–who later would come to be known as Madam C. J. Walker–was born on December 23, 1867 on the same Delta, Louisiana plantation where her parents, Owen and Minerva Anderson Breedlove, had been enslaved before the end of the Civil War.  This child of sharecroppers transformed herself from an uneducated farm laborer and laundress into one of the twentieth century’s most successful, self-made women entrepreneurs.

“Now I realize that in the so-called higher walks of life many were prone to look down on hair dressers,” she has been quoted as saying.  “They didn’t have a very high opinion of our calling, so I had to go down and dignify this work.” 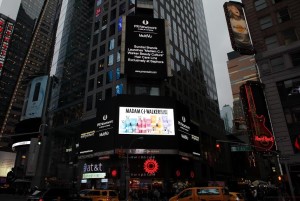 “That woman was out there,” says de Forest with a proud smile.  “She had some swag and a tongue!”

Previous Article
Photo Pick: Oakland Headstones by Lisa Panero
Next Article
To keep current, lifespan of buildings seems to be about 30 years in metro Atlanta