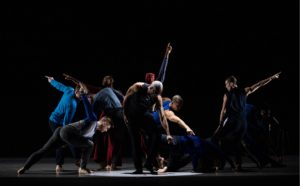 The trio covered a wide swath in a 52-minute conversation that took as its starting point a performance Jones is to bring to Tech Oct. 29, pandemic permitting. Jones created What Problem before the pandemic. It explores topics that recent events have made more relevant: Isolation, divisiveness, and the role of community.

Jones framed the issue in response to a question by the event’s moderator, Lois Reitzes, host of WABE’s City Lights:

The exploration could provide insights to those challenged by isolation resulting from the pandemic. Plus the mental health issues related to social protests following the death of George Floyd. Concerns are felt especially, according to tweets by Mental Health America, among those who identify as LGBTQ, Black, Latinx, immigrant, homeless, impoverished, or otherwise marginalized. 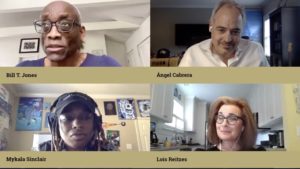 Released June 18, the survey by NORC at the University of Chicago revealed a growth in mental health issues in the U.S. The survey was conducted online and over the phone, in English and Spanish, with 2,000 respondents. Results showed changes in outlook:

This is the context of the virtual town hall, sponsored June 25 by Georgia Tech Arts in partnership with WABE and ATL PBA. The purpose was to, “examine questions probing the ways in which we all have felt isolated before and during this pandemic; how we can come together and create a sense of community, of belonging; and how art can help us to imagine a new future of connections.”

Cabrara described the time when he felt most isolated, and how his life was transformed as he applied lessons learned:

Black mental health is the subject Sinclair is now exploring through her art, which includes painting and assemblage. Sinclair traveled across her journey through Black mental health, pausing to note a popular song about suicide before stopping on the notion of fitting into community: 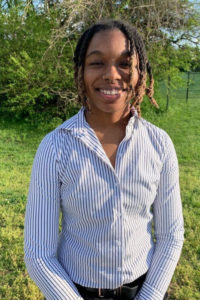 Sinclair paused to share a thought she had entertained after reflecting on comments about her artworks, as voiced by her mother, a university-trained artist:

Jones presented the final major thought before the discussion was opened to questions. Following additional comments by Sinclair, who had pondered what boundaries, what level of respect for boundaries set by others, will apply in social settings at the time the pandemic has become an accepted part of life, Jones observed: 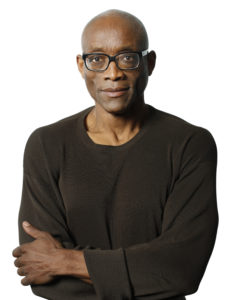