Meredith Leapley’s Moment was when her father closed his firm, sparking her to just start her own 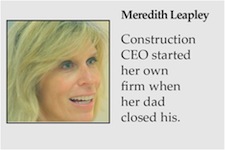 Meredith Leapley’s Moment happened when the phone rang in 1999. Having moved to Atlanta from Maryland just a year earlier to run a branch of her father’s construction company, her heart sank when he called with some disappointing and life-changing news.

“My father called me and told me he was going to close our business and I was going to have to come back home to Maryland,” she said.

Still in her mid-20s, Meredith felt as though she was just establishing herself in Atlanta. In that year, she had grown so fond of her new city that she resolved to make a bet on it, deciding instead to stay and start her own construction business here.

Not that she wasn’t nervous.

“I remember walking down to the city of Atlanta and writing a $75 check to get my business license,” she said.

With that $75 commitment to open Leapley Construction in 1999, she approached several previous clients and former team members – many of whom agreed to continue working with her. In those early months, she was to able to establish some traction – but by no means easily.

“It was a struggle for a good year and a half,” she said. “It was an uphill battle.”

Leapley was forging along in 2000 when an RFP (request for proposal) arrived from a famous Atlanta brand – The Coca-Cola Company.

The RFP would be a dream come true for her new firm. It would be the type of recognition and confirmation Leapley Construction’s needed to get over the hill and attract new clients.

As Meredith recalled in our Moments HD video, “Atlanta is Coca-Cola.”

She called her father – back home in the Washington D.C area – for some advice. He wasn’t very encouraging.

“He said, ‘You’re crazy, there is no way you are going to get this contract,’ ” she recalled. “We went after it anyways.”

Meredith walked nervously into the first pre-bid meeting. Looking around the room, she was intimidated by the more than 25 reputable general contractors vying for the same business. Meredith didn’t mention it, but she was probably one of the only women in the room. Construction, after all, is a male-dominated industry in 2013. It was even moreso 14 years ago.

She was a contractor at heart and, having worked in her dad’s construction firm since she was 19, didn’t mind a little bit of conflict. She wasn’t sure Leapley Construction would be able to land the contract, but she had no problem trying, despite her father’s initial assessment. He helped her with estimating the proposal’s costs – his specialty.

The RFP process wound Meredith through five or six interviews until she got yet another life-changing phone call – Leapley Construction landed the deal for the 2.2 million-square-foot project on the Coca-Cola Atlanta campus.

“We blossomed because of that,” she recalled.

The credibility that accompanied landing Coke as a client brought in other big Atlanta company names such as Turner Properties Inc., Verizon, and Kaiser Permanente. Not only has Coke positively influenced other client contracts for Leapley Construction, the beverage giant remains a loyal client 14 years later, awarding Coke’s Partners in the Promise award to Leapley, recognizing their shared commitment to diversity.

Leapley’s commitment to community has also led her to chair the board of directors for Big Brothers Big Sisters of Metro Atlanta. On her desk are photos of her neice and nephew, as well as a picture of her “little brother,” Andrew, whom she has mentored since he was just three years old. She said the relationship has been special and rewarding for both of them. She sponsors his tuition to private school.

Today, Leapley continues to enlist the help of her dad and as an estimator for her company, providing her a chance to “toss back the opportunity.”

“I am so glad that I was able to stay here in Atlanta, invest in Atlanta, give back to Atlanta – it sure has given back to me.” 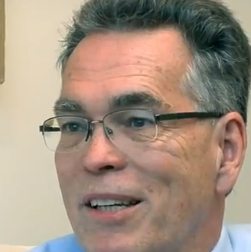 Next week in Moments: Dennis Creech

Next week in Moments: Dennis Creech, who started one of the more successful environmental nonprofits following a Moment in graduate school at Emory.