A spirit of boosterism filled the Coca-Cola Roxy Theatre at the 163rd annual meeting of the Metro Atlanta Chamber on Nov. 17 as the organization highlighted its new strategic direction focusing on the economy, talent and community.

It was the first time the Chamber held its annual meeting in Cobb County – a tribute to the Atlanta Braves, which won the World Series in 2021 and an homage to incoming Chamber Chairman Paul Donahue, chairman and CEO of Cobb County-based Genuine Parts. In fact, the Truist Park baseball stadium was built next to the former headquarters of Genuine Parts. 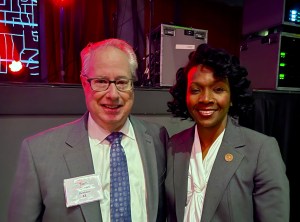 Despite the location, Atlanta Mayor Andre Dickens kicked off the meeting, welcoming the more than 1,200 attendees and describing Atlanta as “one city where everyone can feel that they belong.”

Traditionally, the Metro Atlanta Chamber has held its annual meetings in downtown Atlanta. For the last couple of years the annual meeting has been a virtual event even though it was staged at the Delta Flight Museum in 2020.

As one of the largest business organizations in Georgia, the Metro Atlanta Chamber often has been the flag bearer of addressing the most pressing issues in the region. Over the years, it has taken on promoting harmonious race relations, changing the state’s flag that had a Confederate symbol, working to save Grady Hospital when it was at risk of default and confronting metro Atlanta’s traffic congestion by promoting MARTA and regional transit.

Katie Kirkpatrick, president and CEO of the Metro Atlanta Chamber, described such moments as “milestones” for the region, mentioning how the business community made sure Martin Luther King Jr. was properly honored in Atlanta after receiving the Nobel Peace Prize in 1964, and how business leaders were able to successfully bid for the 1996 Summer Olympic Games, among other major initiatives.

The 2022 meeting highlighted what’s working in the region rather than focusing on problems. For example, affordable housing, traffic and transit, health disparities, income inequality, crime, the Buckhead cityhood movement and gun legislation were topics barely mentioned during the 90-minute breakfast meeting.

After the meeting, the leadership of the Metro Atlanta Chamber did answer questions at a press briefing. It included Kirkpatrick; Raphael Bostic, president of the Federal Reserve Bank of Atlanta who is the 2022 MAC chair; and Paul Donahue, chairman and CEO of Genuine Parts who will be the 2023 MAC chair.

All three were asked their thoughts about the “milestone” challenges of today.

“I actually think we’re in the midst of one right now,” Bostic said. “The ATL Action for Racial Equity was a direct response to a collective acknowledgment that opportunity wasn’t reaching all corners of our communities. Over the course of this year, we had a segment of every board meeting where businesses got to stand up and talk about how they’ve taken parts of that playbook to make real change.”

More than 250 companies have signed up to be part of the ATL Action for Racial Equity.

“Tackling racial disparities is hard,” Bostic said during his official remarks at the meeting. “It’s a multi-year effort to address the systemic racism in the Atlanta community.” 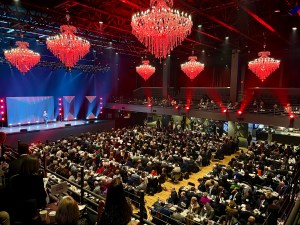 The Coca-Cola Roxy provided a different ambiance for the 2022 MAC annual meeting with seating at long tables. (Photo by Maria Saporta.)

Donahue said Genuine Parts has been making “great progress internally” to diversify its team and its board.

For him, the milestone moment in the Atlanta region is addressing crime.

“You heard from Mayor Dickens this morning, who I’m a big fan of. I know with our new police chief, they are really galvanized to address the crime issues in Atlanta,” Donahue said. “That’s an issue we all deal with. So, I’m confident with the mayor’s actions and the police chief that we’re going to finally make some real progress.”

For Kirkpatrick, she said the region is at an inflection point.

“We have a second-term governor, and we have a mayor who has already proven that the first year was very productive,” she said. “The state and the city are getting along very well. And if we harness that energy, and if we get that right, then the world is our oyster going forward. I think there’s an inflection point there that will help this community continue to grow with that partnership between city and state.”

Kirkpatrick said she’s optimistic that new leadership at the state will continue the good business relations that the late House Speaker David Ralston and Lt. Gov. Geoff Duncan had with the Chamber. She said the Chamber has had a “long-standing relationship” with both Burt Jones, the incoming lieutenant governor, and Jon Burns, the incoming house speaker.

“They understand the role that the legislature plays when it comes to creating jobs and a strong economy,” Kirkpatrick said. “So, I’m actually bolstered but I think that’s the inflection point right now is that we have to continue the momentum. If we let our foot off the gas, then we could be where other communities are right now.”

Kirkpatrick also said the region must seize the opportunity of hosting the FIFA World Cup in 2026. 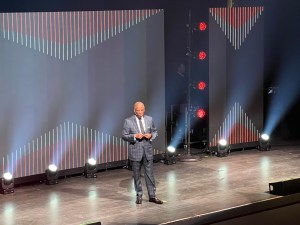 Chris Womack, president and CEO of Georgia Power, will be the MAC chair in 2024. (Photo by Maria Saporta.)

“It may seem a long way off, but that’s a rallying cry for this community,” she said. “If there are things that we want to get done in the next three and a half years, now is the time. And what a better way for us to sell this region through the lens of the world is coming here in 2026.”

Several issues could impact metro Atlanta’s economic prosperity. For example, the state’s gun rights legislation has led to the cancellation of Music Midtown in 2022, was an economic blow. Other events also could be affected unless the state legislature tweaks gun legislation that would allow private entities leasing public spaces to restrict guns during major events.

It is expected that there will be another attempt to create a City of Buckhead, and the Chamber could play an important role in preventing that from happening by addressing the economic fallout that would result in the deannexation of Buckhead from the City of Atlanta.

Unlike many previous MAC annual meetings, the issue of transit and MARTA was not discussed. 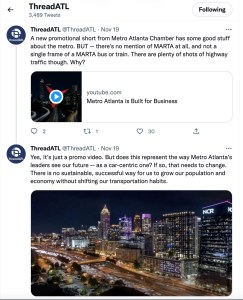 The online urban commentary site ThreadATL noticed that the promotional video presented at the annual meeting had multiple images of highways in the region but not one image of a MARTA train or bus.

In the past, there’s been widespread acknowledgment that Atlanta has been a nexus for major sports and entertainment events because of its MARTA system. In fact, it’s extremely complicated to get to the Battery at Truist Park on transit from other areas in Atlanta.

In his official remarks at the annual meeting, Chris Womack, president and CEO of Georgia Power who will be the MAC Chair in 2024, was upbeat about the future – thrilled that everyone could meet in person this year rather than virtually.

Atlanta’s hosting of the 2026 World Cup is especially significant for Womack, who loves sports. “I hope you all are half as excited as I am,” he said.

At the end of the official meeting, Kirkpatrick talked about the “special sauce” that exists in Atlanta.

“We are a region like none other. We are a region with extraordinary resiliency. One united capital city. We know we’re not perfect,” Kirkpatrick boasted. “We are built differently than any other region. We are bold. We aspire for more, and we make things happen.”