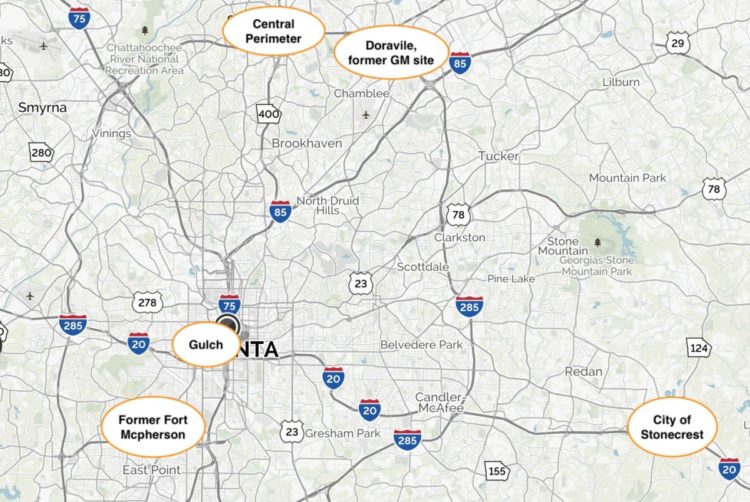 Five sites in metro Atlanta have been talked up as potential locations for Amazon's second headquarters, should the company choose to build it in the region. Amazon included metro Atlanta in a short list of 20 cities it released Thursday. Credit: mapquest.com, David Pendered

Metro Atlanta’s civic, business and elected leadership were among those who on Thursday expressed some strong reactions after learning Thursday morning that Amazon had included the region in its short list of 20 regions where the company’s second headquarters would be located. 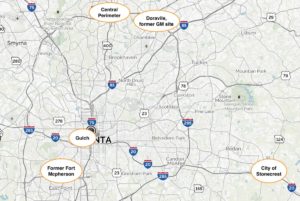 Five sites in metro Atlanta have been talked up as potential locations for Amazon’s second headquarters, should the company choose to build it in the region. Amazon included metro Atlanta in a short list of 20 cities it released Thursday. Credit: mapquest.com, David Pendered

“This is truly a collaborative effort and I believe our success is a direct result of our teamwork and our willingness to focus on results. The city worked very closely with the state to develop a competitive bid that represents our strengths.

Atlanta is the economic center of the ninth-largest metropolitan area in the country and the eighth largest economy.

We have leading universities including the Atlanta University Center, now Emory University and also The Georgia Institute of Technology, which as we know is producing some of the nation’s and the world’s leading young scientists, engineers and entrepreneurs. Our workforce is highly educated and nimble and has an enormous amount of experience in working with established tech sector companies.

The Atlanta region is home to financial technology and cybersecurity companies. Our startup ecosystem is growing and thriving and continuing to support entrepreneurs throughout our economy.

I also want to thank the visionary leadership of so many of our past mayors who have made it possible for us to have one of the largest transit systems …  and that is MARTA. And we also know that we are at the beginning of an expansion of MARTA, a historic expansion of MARTA, thanks to the overwhelming support of the sales tax referendum, which will generate $2.6 billion dollars over the next forty years.

We are excited for the potential regional collaboration to expand our transit system and know that it will help us attract even more companies to the area.

And also we can’t stand here today and not to mention Hartsfield-Jackson international airport, the worlds busiest and most efficient passenger airport. Because of its connectivity, 80 percent of the nation’s GDP is within two hours of Atlanta. It offers direct flights to so many flights across the country, including the West Coast and also to international cities across Europe, Asia and Africa. We also know Atlanta is the hub of major interstate highways and railroad networks. And so many of these things that are transit-oriented really speak to the high quality of life that we’re able to have in the metro area at such a relatively low cost.

Also we can’t stand here and not mention our beautiful tree canopy in the city and also the culture that our city has to offer to so many people looking to move to the region.

So, I’m so very excited to move forward to the next phase of this process and I look forward to continuing to work with Gov. Deal, [State Department of Economic Development]Commissioner [Pat] Wilson and all of our stakeholders to make sure that Atlanta puts forward the strongest, most competitive bid possible.

(Question from a reporter:) What is your message to taxpayers who say there should be transparency in what the state is offering in terms of tax breaks or other incentives?

KLB: I think that those details will be forthcoming. I think that anytime that we’re looking to attract, whether it be a company, whether it be the Super Bowl, that there are things that we have to keep close to continue to make sure that we are competitive.

But the governor has made it very clear that anything that needs to be improved on on behalf of the state will be done in a special session and there will be ample opportunity for the public and lawmakers to weigh in on that.

(Question from reporter:) There are concerns about Amazon and affordability, potentially making the affordability problem worse. What’s your response to those concerns?

KLB: I think when you look at Amazon and you look about the number of small businesses that Amazon supports and you think about Amazon and you think about the layers of people who come to work for Amazon, its not just people who will be corporate executives, but you’ll have warehouses have you’ll have administrative staff so I think that there are layers of people who will have an opportunity to be a part of this amazing company

Our affordability issue in Atlanta is not an issue related to Amazon or any of our other Fortune 500 companies. It’s an issue that we are facing in the city and that many cities are facing across the country that we have to make sure that as our city grows and our city prospers that we remain a city that is a city for everyone regardless of your income.

That’s the reason … on Tuesday that I asked that legislation be introduced to create a commission to look at affordability and it’s top of mind. And the interesting thing about this affordability conversation: it’s not just a conversation that people are interested in who are seeking to live in the city of Atlanta, but our companies are worried about it.

We have businesses at the airport who are concerned about affordability because they have to have people who live in the city who have the ability to get to and from work.

And so it’s top of mind for so many people and I think its something that in the Atlanta Way we can truly be a model. But that’s an issue that we are grappling w as a city and I think that any time you talk about bringing jobs to a city, I think it will go a long way to help address many of the issues we’re experiencing.

Her entire press conference, including more Q and A on Amazon is available on Twitter