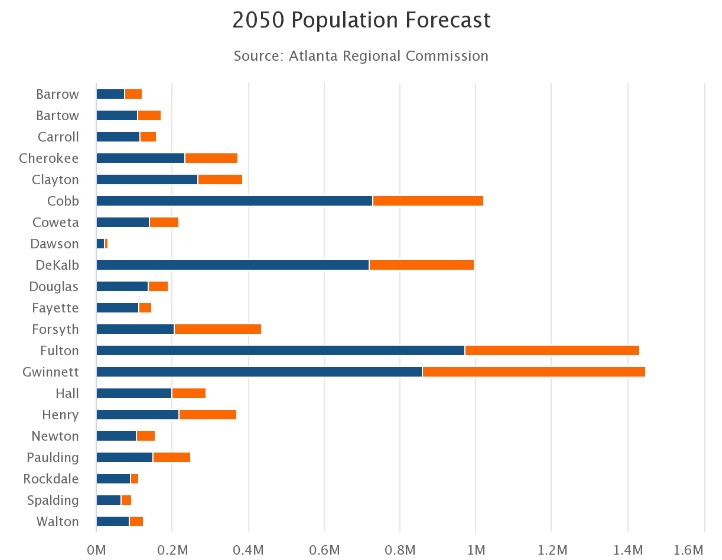 The population of Metro Atlanta’s 21 counties will grow from about 5.7 million as of 2015 to about 8.6 million in 2050, according to a new forecast by the Atlanta Regional Commission.

That’s like adding about one metro Denver, Colorado to metro Atlanta in about a generation — or 2.9 million more metro Atlantans than there were just a few years ago.

That future population is going to be older and more diverse than today’s metro Atlanta.

“It always just kind of boggles my mind to think about the Atlanta region having more than a million people who are 75 years and older,” said Mike Carnathan, who oversees research and analytics for the ARC, a group for the metro’s counties.

Such a high percentage of over-75s is something new for metro Atlanta.

“It’s really important to start thinking about that,” said Carnarthan. “How is society going to adapt?”

The ARC periodically updates population and employment forecasts, because part of its job is to help counties understand the future needs of metro Atlantans. The ARC helps figure out what kinds of jobs Atlantans will need to study for, or how people will want or need to live or travel in what will be a more crowded world

The ARC starts its forecasting by looking at what’s called an “econometric forecast:” that’s done by a national research company, but it’s a county-by-county look at the economy.

At its most basic, that starting forecast is: “Here’s what the economy is going to look like, and here’s the people we need to meet these economic needs,” Carnathan said.

But there are tons of ways to adjust all those variables. The national forecasters might be correct about, say, labor force participation rate in the future.

Or the ARC’s group of experts from around here, like professors and economists, might think the data from the national group is a bit off. And so they tweak that number and change the outcome of the model a little.

The ARC also talks to the folks who run local county and city governments, and ask them what’s being built, where they’re planning for growth, what their local plans call for. And that goes in the mix too.

The white share of the population will decline to about 31 percent, from almost half now. The population of people of Hispanic, Asian and other race and ethnic backgrounds will grow in proportion to the white population decline. The African-American population should hold steady at about 33 percent.

The ARC has published the report here.