Metro Atlantans help Haiti after earthquake; is Chile next?

By Guest Columnist STACY SHELTON, former environmental reporter for the Atlanta Journal-Constitution who is now a public affairs specialist for the U.S. Fish and Wildlife Service in the Southeast Regional Office in Atlanta

Pat Epps, owner of Epps Aviation at Dekalb-Peachtree Airport, recently offered me the chance to ride along on a mission to Haiti with one of his pilots. I said yes in part because I wanted to see some of the devastation up close. My old newspaper reflexes had kicked in, the ones that compelled me to scramble for a front row seat to news event.

But on the 13-hour trip, which began and ended at PDK, I was never more than 100 yards from the airplane. I didn’t see the ruins, or its many victims. Just small tent cities and blue tarps over cinderblock buildings as we flew in and out.

Instead, I was privileged to witness something far more compelling: the incredible generosity of the human spirit, and its attendant joy.

From my seat on the 8-passenger airplane, I spoke with relief workers going in to Haiti, and others going home. 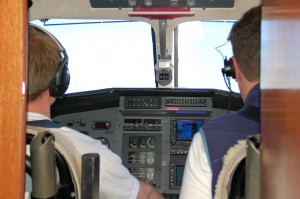 Pilot Sean Sanders on the left and co-pilot Chad Brammer on the right. Photos by Stacy Shelton

They included Peter J. Anderson of Atlanta, a senior law partner at Sutherland Asbill & Brennan. After the quake, he said he’d raised more than $50,000 from his colleagues in one week for ServeHaiti, a faith-based organization that runs a medical clinic in a town 50 miles northeast of Port au Prince. Anderson is the group’s treasurer. He was on his second trip in since the earthquake hit. On the first trip, he was recruited into medical duty, and talked about taking half an hour to slowly remove a bandage from a young girl whose leg had been amputated. He didn’t want to hurt her.

Four other ServeHaiti volunteers and staff flew with Anderson that day, including Dr. Charmaine Lewis, who left a five-month-old baby at home in North Carolina. She planned to stay a week at the clinic. Lewis learned about ServeHaiti from a flier she picked up at Sacred Heart Catholic Church in downtown Atlanta while she completed her residency at Emory University. She speaks fluent French, and is quickly learning Creole, the dominant language in Haiti. When I said I hoped her efforts in Haiti went smoothly, she replied, “It’s never smooth, but it always works out in the end.” 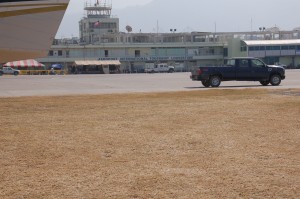 I later found out from one of the trip’s donors that a woman died giving birth. Lewis, who had tried to save the woman, personally took care of her son.

After dropping off the ServeHaiti crew and their small pharmacy of supplies, two homebound rescuers joined us. One was a Haitian American living in Tampa who had served as a translator while checking on his family outside Port au Prince. The other was Chuck Hans of North Georgia, a retired conservation officer for the Georgia Department of Natural Resources.

On the flight home, Hans talked about wanting to go back and help the many orphanages who have lost their sponsors over the years. He spoke of a crippled teenager who could not leave his bed, and seemed to truly appreciate the hand on his back from Hans. 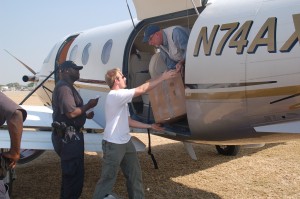 Peter J. Anderson, senior partner with Sutherland asbill and the treasurer for ServeHaiti, unloads boxes from the plane with Sanders' help. A U.S. Customs agent is looking on.

Hans had originally gone to Haiti as part of a DNR search-and-rescue team working through Operation Mobilization, a missionary organization based in Tyrone, Ga. DNR Commissioner Chris Clark bought supplies for the team and joined them at the send-off, Hans said. The plane for that trip was loaned by Jim Walters of Gainesville, a developer and longtime DNR board member.

When we landed back at PDK at 10:30 pm, Michael Rettig met us with a small cooler of beer. An Atlanta businessman, Rettig leases the airplane we were on, a Pilatus PC-12 owned by David Hirsch’s ECI Groups, a Marietta-based development company. Hirsch had donated the plane and Rettig had coordinated the trip, collecting thousands of dollars for the fuel and supplies through the Rettig Family Foundation. 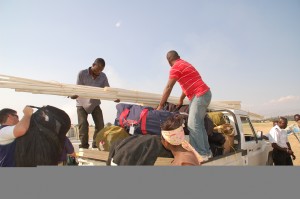 Supplies being delivered in Haiti.

The pilot, Sean Sanders, said it would have cost the charities about $14,000 for the charter plane service they got that day. Sanders had volunteered his time, bringing his total to 10 trips and 65 flight hours for Haiti relief efforts.

That was just one day; one plane ride. So many people — Atlantans and Georgians — plus countless local businesses have responded to Haiti’s crisis.

When I heard the news of the earthquake that struck Chile over the weekend, I couldn’t help but wonder how many Atlantans will be there to help.