In a subtle gesture, Atlanta Democratic Sen. Donzella James has helped establish the voice of the Millennial Civil Rights Campaign at the Georgia Capitol. James gave the organization a seat at the table to discuss her proposed statewide ban on plastic grocery store bags. 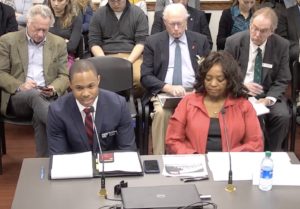 James presented Taos Wynn, the organization’s president, to a Senate committee as a valued leader of a significant organization.

Wynn spoke as the president of a group that was formed in the summer of 2019 to champion concerns of the rising generation of civil rights advocates. Wynn is not a registered lobbyist.

In addition, the opportunity provided Wynn a platform to extend the Millennial Civil Rights Campaign’s concerns to encompass sustainability and the environment. The group’s initial legislative issue involves another proposal by James – a proposed apology from the State of Georgia for slavery and Jim Crow, Senate Resolution 537.

No formal action was taken on the plastic bags’ legislation. The Feb. 12 event was a hearing for the purpose of gathering comments on a proposal that’s viewed as facing an uphill battle to become law – in part because major retailers, including Kroger, already have announced plans to stop distributing plastic grocery story bags by 2025. The market shift lessens the need for government intervention, some members indicated.

But the bill did get a hearing before the Senate Economic and Tourism Committee. Longtime Sierra Club lobbyist Neill Herring thanked committee Chairman Frank Ginn (R-Danielsville) for responding to Herring’s request for a hearing. 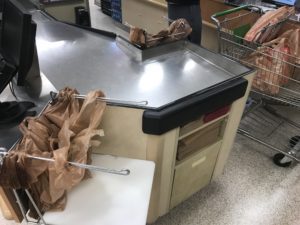 Grocery stores have begun providing a choice of bags to transport purchases, including bags made of plastic or paper, and reusable bags often made of fabric. Credit: David Pendered

At the hearing, James brought Wynn to sit beside her to deliver remarks in support of the plastic bags’ legislation, Senate Bill 280. After bringing him to the table, James said:

And with that, Wynn began a three-minute presentation. Wynn said:

The Millennial Civil Rights Campaign states on its website that it’s, “an intergenerational effort led by Millennial leaders to drive change on a local and national level in the areas of race relations, gun violence, student debt, and the promotion of human rights.”

The organization is embraced by notables of the present and original civil and human rights movement.