Young Georgia voters strongly favor the proposed Georgia Power rate hike and fewer than half support shifting from coal to renewables to generate electricity, according to a results of a poll by the Georgia chapter of the Sierra Club. 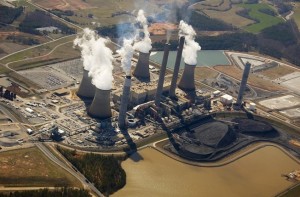 Coal-fired power plants, such as Plant Bowen near Cartersville, are supported by a majority of millennials, according to a poll by the Sierra Club’s Georgia chapter. Credit: panoramio.com (2008)

The polling company advised against reading too much into results from the millennials because the margin of error for the age bracket is 13.2 percent, compared to 3.23 percent for the total poll. The broader results of the poll show widespread opposition to the proposed rate hike and strong support for shifting away from coal-fired power plants.

Georgia Power is requesting to hike its rates in order to raise $873 million. Georgia’s Public Service Commission is slated to vote on the proposal Dec. 17, following a decision Thursday morning by a PSC committee to schedule the matter for a vote by the full commission.

The telephone poll of 923 voters was conducted from Dec. 6-8 by Public Policy Polling, of Raleigh, N.C., on behalf of the Sierra Club’s Georgia chapter.

The poll showed that 67 percent of respondents aged 18 to 29 years of age supports the proposed rate hike. Results from the entire universe of respondents showed 69 percent oppose the rate hike proposal.

Jim Williams, of Public Policy Polling, cautioned that results from the millennials need to be considered in the light of their small representation in the overall poll. He estimated that about 55 young voters were contacted, and he noted that young people tend not to be energized on these types of issues at this stage in the election cycle.

Here are the results when voters were asked if they would approve the proposed rate hike:

Young people are less supportive than their elders of replacing coal with renewable energy at a similar cost. For the categories of “strongly support” and “somewhat support,” the totals are:

Williams focused on the overall results in a statement released by the Sierra Club:

Georgia Power filed documents Dec. 4 with the PSC showing the hike would be phased in over a three-year period starting in 2014. The utility serves about 2.4 million customers including MARTA, which won some price concessions in the final settlement.

Georgia Power has said the rate increase would be about $2.18 a month for the average residential customer in 2014. The additional increases would range from $3 to $4 a month in the second and third year of the increases.

Georgia Power intends to use some of the additional funds to upgrade coal-fired power plants. The Sierra Club opposes the expense.

“The investment in coal-fired plants doesn’t make sense,” said chapter Director Colleen Kiernan. “With Plant Vogtle coming on line, Georgia Power has excess capacity and will continue to have excess capacity with the addition of 2,200 megawatts.”

Georgia Power’s parent, Southern Co., won approval to build two nuclear reactors at Plant Vogtle, about 30 miles south of Augusta. The Obama administration has provided federal loan guarantees and Southern has said in a statement that its total guaranteed borrowings would not exceed about $3.4 billion.