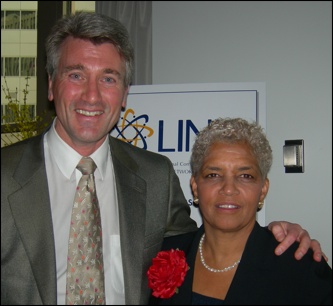 Minneapolis Mayor R.T. Rybak is running for re-election for a third term as mayor. But he’s setting his sights on another office — that of the governor of Minnesota.

At a LINK reception and dinner Wednesday evening, Rybak acknowledged that he is seriously considering running for governor as a way to better serve the metro region of Minneapolis-St. Paul.

“Regional economies drive states, Georgia and Minnesota included,” Rybak said. “Our governor clearly does not get the value of the cities of Minneapolis-St. Paul, which is ironic because they pay a disproportionate amount of the budget that he’s trying to balance.”

Rybak explained that Minnesota traditionally has not been an “ideological place.” Instead the state has been able to cross party lines for the good of Minnesota.

“The governor has been uniquely incapable of that,” Rybak said in an interview. “He’s very partisan. And he’s been interested in running for president for the last four years. I’m not a fan.”

Minnesota Gov. Tim Pawlenty, a Republican, was thought to be on Sen. John McCain’s shortlist for vice presidential nominee.

Of course, Rybak, a Democrat, has played his own hand in national politics.

“I was the first mayor to support Barack Obama for president,” Rybak proudly told the delegation. “I was part of the ‘Draft Obama’ movement.”

There had been much speculation that Rybak would get a top job in an Obama administration.

Last fall, Rybak was part of a delegation from Minneapolis-St. Paul that came to Atlanta to study how Georgia’s capital city address its key issues.

It was Minneapolis’ business and philanthropic sector that started the idea of the “5 percent club.” Companies and individuals pledge to give 5 percent of their pretax earnings to charity and to philanthropic causes.

As a result, the cities of Minneapolis-St. Paul have an extraordinarily strong arts and cultural community with first-class facilities.

“The community has invested $1 billion in the arts in the past five years in new facilities, most of it with private money,” Rybak said.

Joe Bankoff, president of the Woodruff Arts Center, told me to be sure I write down that statement and put it in bold.

Rybak also bragged about having the “greatest urban parks system in America” — a system that has been in the making for more than 100 years. Its greenways take advantage of the regions 18 lakes, two waterfalls and river. The city also took an abanadoned rail line and turned it into a bikeway. Now Minneapolis is the No. 2 bicycle commuting city in the country after Portland. Rybak said his city is working hard to overtake Portland.