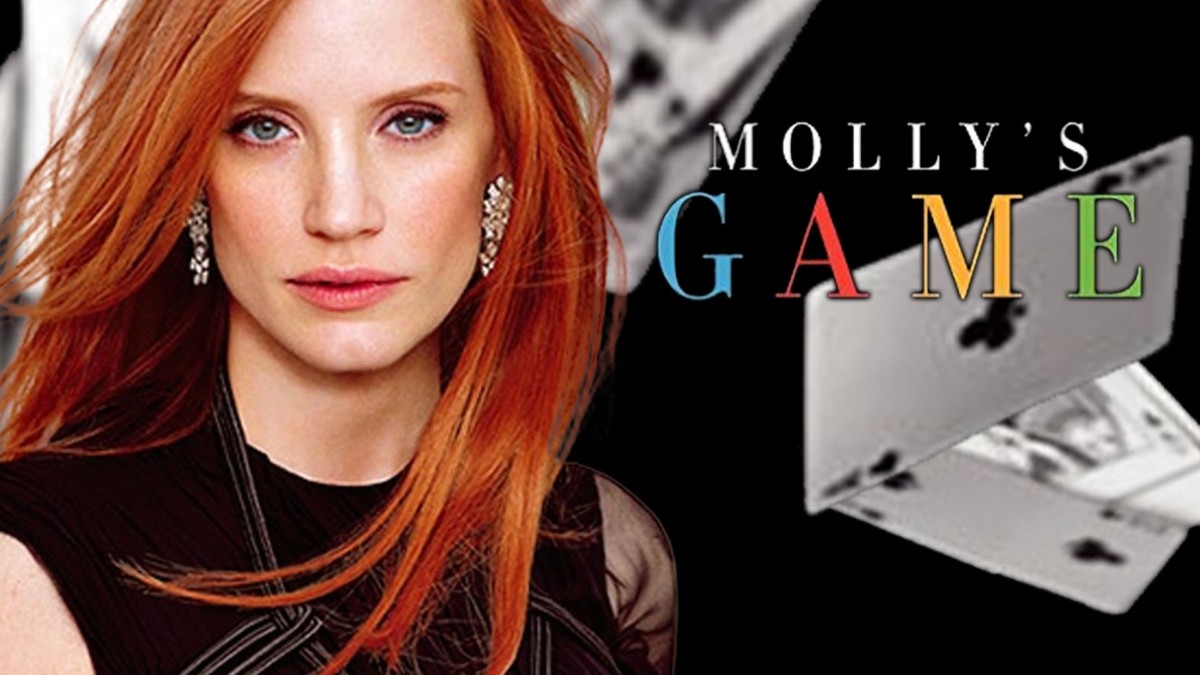 When everyone talks about movies with good roles for women, “Molly’s Game” is precisely the sort of movie they’re talking about. Brash, clever and bristling with sexy insider jargon, the film offers Jessica Chastain the kind of showcase most actors would kill for.

And she’s killer in the part. 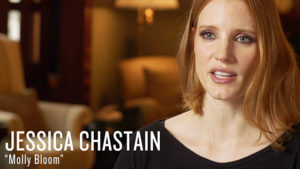 Chastain plays Molly Bloom — no, not the Molly Bloom from James Joyce’s “Ulysses”  — but a real-life person. In fact, this Molly isn’t even Irish. She’s Russian Jewish, which comes in handy when she decides to poach some players from the highest-stakes poker game in New York, a legendary Brooklyn-based operation run by the Russian Mob.

But I’m getting ahead of myself.  Bloom was supposed to be an Olympic medal winner, a downhill skier of singular guts and skill, with an overbearing father/coach, (Kevin Costner) who refused to take failure as an option. But even he can’t control bad luck and a freak accident that puts Molly out of completion permanently.

So she heads for L.A. and gets a job as the personal assistant to a small-time sleaze-ball who hosts a big-time weekly underground poker game. Just getting a seat at the table costs $10,000, but that’s chump change to the movie stars, business tycoons, etc.  who show up. 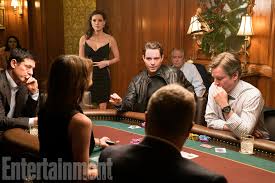 A poker game in “Molly’s Game”

Reportedly the real-life Molly counted Ben Affleck, Leonardo Di Caprio and Toby Maguire among her clientele. (Maguire, played with coiled menace by Michael Cera, was apparently one mean S.O.B.; at one point he says, “I don’t like playing poker. I like destroying lives.”).

The film traces Molly’s transformation from naïve assistant/go-fer/decorative object to running her own game. Not only does she move from L.A. to New York, she also moves from cheese trays and a J.C. Penney dress to Mr. Chow and a Barney’s wardrobe. As someone puts it, she becomes the “Cinemax” version of herself.

But success breeds, well, challenges. There are the aforementioned Russians, who don’t play nice, followed by the Feds, who don’t play nice either. Thus, “Molly’s Game” is framed by her relationship with the attorney (a wonderful Indris Elba) who may or may not take her case and whose changing opinion of Molly mirrors our own.

Most of us are used to Aaron Sorkin’s rat-a-tat screenplays (He won an Oscar for “The Social Network” and untold numbers of honors for “The West Wing.”). 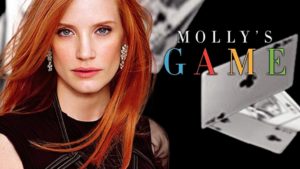 But here, Sorkin’s making his directorial debut and his pace is as lightning- fast as his verbal gymnastics. Chastain and Elba bat dialogue back and forth like they were Cary Grant and Rosalind Russell in “His Girl Friday.” And the picture’s snap-crackle-pop editing recalls the have-a-needle-and-a-smile sequences in “Requiem for a Dream.”

Without being the least bit derivative,  “Molly’s Game” suggests bits and pieces of  ‘’The Wolf of Wall Street,” “Goodfellas,” and “The Big Short.”

Yet it remains very much its own movie if for no other reason than the protagonist is female. (Pause for a second and think about the female roles in those pictures; not exactly encouraging…)

There are problems — most noticeably, a Freudian explanation of everything Molly does that just doesn’t hold water. Further, the movie is just a teensy bit too long,

But these are quibbles. To borrow from poker talk, “Molly’s Game” is a royal straight flush. And that’s about as good as it gets.