Weighing in at 110 pounds, 6 ounces, the new record holder for the largest blue catfish ever caught in Georgia measures 58 inches long with a girth of 42 inches. It’s the aquatic version of Georgia’s Hogzilla, the monster hog shot in 2005. 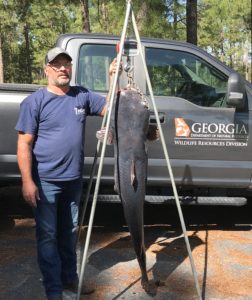 The fish is five times the weight of the biggest typical blue catfish. It was pulled from the Chattachoochee River south of Columbus, the city known for attracting huge crowds to jump into the Chattahoochee River for rafting and kayaking adventures.

Hogzilla, said to be 1,000 pounds when he was shot south of the Ocmulgee River, roamed the banks of a river popular with rafters and kayakers and others who like to get in rivers.

Tim Trone, of Havana, Fl. caught the fish Oct. 17 on line with a hook baited with cut bream. Trone was fishing in the local Chatt Kat Tournament that’s a popular get-together on Lake Eufala, also known as the Walter F. George Lake.

This catfish was more than 17 pounds heavier than the previous record, according to a statement from the Georgia Department of Natural Resources.

Two important aspects about the catch are that it was caught with a hook, not by hand, and that it’s a blue catfish, not some other relative.

DNR provided this handy primer on catfish varieties, which explains why this record blue catfish is so unique: 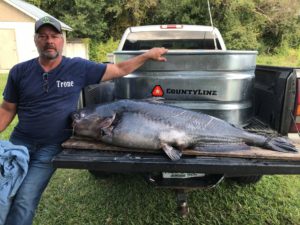 Trone hooked the record catfish upriver from Lake Eufala, near the town of Omaha, in Stewart County, according to DNR’s statement.

This being an era of data mining, state scientists went to work on the fish to discover what they could. They determined the creature was about 23 years ago through a forensic process described by a DNR spokesperson as such:

The verdict on final results observed:

Scientists with National Geographic went through an ever more elaborate review to determine whether Hogzilla was fact or fiction. The filmed an episode of the NG show with scientists exhuming Hogzilla and deciding the hog was, in fact, a hog, and though it didn’t didn’t measure in at the 1,000 pound, 12-foot critter of legend, it did weigh in at 800 pounds and nearly 8 feet long, according to a report by nbc.news.