The strength of human spirit will be on display starting Sunday, when six women and 27 men begin a round-the-world sailboat race. Each skipper will be alone in a 60-foot sailboat capable of speeds to 45 mph and, in the Southern Ocean, summiting waves 60 feet high. 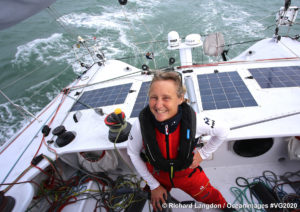 British sailor Pip Hare had this to say about the male-dominated Vendee Globe sailboat race: ‘More men have walked on the moon than women have completed the Vendée Globe, which is all the inspiration I need to succeed.’ Credit: Richard Langdon

This is a record year for women to compete in the Vendee Globe. The historic bastion of men was started in 1989 and often is called the Everest of the Sea for the daring it presents and the allure of its simple rules:

In addition, skippers agree they won’t risk killing themselves by sailing into iceberg territory in the Southern Ocean. The temptation is to sail far south because the route shortens as it approaches the Antarctic Pole. The danger is collision with icebergs. Skippers agree to not violate an Antarctic Exclusion Zone that can be moved north if the ice moves north during the race.

More women are sailing this race than have competed in all of the eight previous Vendee Globe races. No woman has reached the podium. Fourth place is the highest ever, by a British engineer competing in this year’s event – Sam Davies.

The reasons for the historically low participation among women are familiar, according to accounts by several female skippers: Sponsors favor men, and women face different types of challenges from men in getting time away from work to train for the event, and to compete in the in prerequisite races. 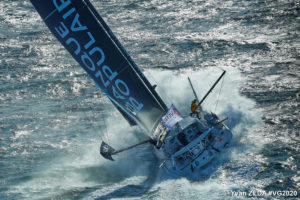 Just 30 years old, French sailor Clarisse Cremer is a phenom who shifted to the 60-foot IMOCA boats after stunning the sailing world with her blinding speed as a novice in a 2017 race from France to Guadaloupe. Credit: Yvan Zeda

Here’s how Pip Hare explains the significance of six female skippers in this edition of the Vendee. Hare is a proven blue-water finisher, a British adventurer on land and sea who’s self-financed much of her campaign after she couldn’t secure early sponsors:

The Vendee Globe 2020-21 begins and ends in Vendee, France. The Vendee region is located in west-central France, south of the Loire River and touching the Atlantic Ocean. The exact route each skipper sails depends on each evaluates weather systems in the ocean. The general outline from the start in Vendee is:

Each of the six women is a success in the worlds of their choosing that include – professional sailor, engineer, business entrepreneur, environmental advocate. This is a quick introduction to the six female skippers in the fleet of 33 sailboats that on Sunday are to depart from Vendee, France on the Vendee Globe 2021: 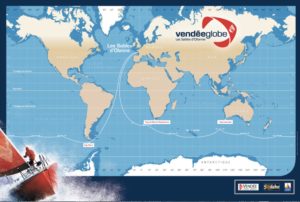 Thirty three sailors, six of them women, are to depart Sunday on the Vendee Globe 2020-21, which is to cover 27,940 statute miles. Credit: vendeeglobe.org