The trip’s mission is to expose the students to different forms of culture, heritage and music while showcasing Atlanta’s southern hospitality.

Over the weekend, the Morehouse College Glee Club departed for Nigeria, marking 50 years since the choir’s first visit. 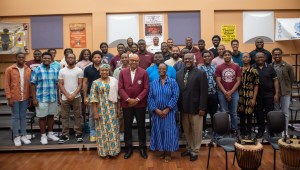 From June 26 to July 9, 40 students and faculty members will participate in a three-city tour and cultural exploration of the African republic’s music and heritage.

Singing at the funeral of slain Civil Rights activist and Morehouse alumn, Dr. Martin Luther King, Jr. took the all-male chorale into international stardom. People from all over the world watched their riveting performance and requests were shortly sent to the U.S. State Department inviting the choir to other countries.

“It propelled [the Glee Club] and the college in a more international light,” said Dr. David Morrow, director of the Morehouse College Glee Club.

The Glee Club’s first international trip had several stops in Ghana, Uganda, Senagel, Ethophia and Nigeria. From there, they performed in international choral festivals with soprano Jessy Norman, Super Bowl XXVII with recording artist Natalie Cole and other performances with Stevie Wonder, Gloria Estefan and Trisha Yearwood during the opening and closing ceremonies of the 1996 Centennial Olympic Games.

In addition to private fundraising efforts, a grant from the U.S. Embassy and cross-continental airfare were provided by Delta Airlines.

“Cultural exchanges such as the upcoming visit of the Morehouse College Glee Club help contribute to strengthening the bonds of friendship and collaboration through music and arts, offering an opportunity for Nigerian students to learn about academic experiences in the United States,” said Mary Beth Leonard, U.S. Ambassador to the Federal Republic of Nigeria.

In addition to conducting performances, masterclasses and appearances at the republic’s capital Lagos, the Glee Club will also make stops in the cities of Abuja and Enugu.

The group has been rehearsing to perform songs native to Nigeria. A variety of songs sung in Edo, Yorùbá, Hausa and Igbo languages and dialects are part of the concert catalog. Morrow also said the students would have an opportunity to learn from musicians who perform in a new African genre, Afrobeats. 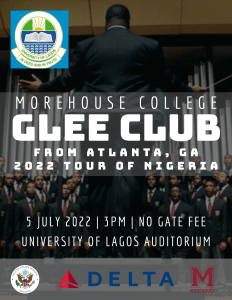 Morrow is taking this tour as an opportunity to inspire high school and college students to attend Morehouse or other Historically Black Colleges and Universities.

“Part of our mission is to see if we can encourage them to come maybe to Atlanta — to Morehouse, to Clark Atlanta, to Spelman — where they can also finish [their studies],” Morrow said.

With the visits to churches, universities, and concert halls, the Glee Club will visit Nigeria’s Point of No Return, where men, women and children were shipped away to the Western Hemisphere for enslavement and never returned.

“I’m hoping they can be sponges and absorb everything because they’re looking at us, trying to learn from us and I want it to be mutual. I want them to get as much from us as we get from them,” Morrow said.