Morehouse, Spelman react to the reinstatement of two APD officers that tased students

Taniya Pilgrim and Messiah Young were injured while the officers were arresting them during a Black Lives Matter protest in May of last year. 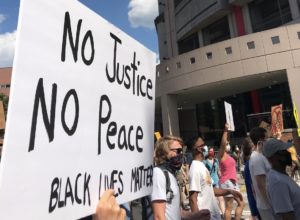 “The tasing of two innocent students was brutal and completely unwarranted,” the president of Spelman College, Dr. Mary Schmidt Campbell, said in a statement made to SaportaReport. “The actions of the officers traumatized the students, their families and our campus communities.”

Last week a ruling from the City’s Civil Service Board dismissed officers Mark Gardner and Ivory Streeter after being terminated for tasing Pilgrim and Young before forcefully removing the students from their car to arrest them.

It is incomprehensible to me that a system designed to support but hold accountable, our civil servants appointed to protect and defend us could allow for such a reversal and reinstatement. For those still wondering what allows and reinforces the abusive practices of policing visited upon Black people, you need only study the policies and logic that would legitimize this decision.

The board declared in their review that both cases against the officers’ dismissal lacked due process and that the officers did not violate Atlanta Police or city policy.

Thomas took umbrage with the board’s ruling. “The nation watched as these officers tased and dragged these two students from their car.” He continues to say that the officers had “no evidence” that suggested the students did anything to provoke them from their actions other than “driving while Black.”

In addition to Young finding out of the reinstatement from the media, his attorney, Mawuli Davis, said in a statement that he also found out that his case has been transferred from the Fulton County District Attorney’s office to the Georgia Attorney General’s office.

Davis continued in his statement that the students “have experienced the pain of the justice system continuing to fail them as victims of police brutality.”

“It’s disappointing to learn that these two officers acted violently against two young people and did so without consequence,” Campbell remarked.

Both college presidents and Atlanta Mayor Keisha Lance Bottoms agreed with the termination of Gardner and Streeter.

Bottoms said in a statement that “while the CSB has reversed the termination of the officers, given the unrest across our city and nation at the time and the disturbing video footage before us, I still believe that the right decision was made.”

The mayor also stated that the incident, along with others, led to the changes of APD’s use-of-force policy, including de-escalation training and guidance on when and how to intervene in specific situations.

Bottoms concluded that it is her “sincere hope that these policy changes and additional training for our officers will help eliminate the potentially life-threatening and deadly encounters that have happened in the past.”

After the announcement from the CSB, the Atlanta Police Department issued the following statement:

Because Investigator Gardner and Investigator Streeter have criminal charges related to this incident, they will remain on administrative leave until those charges are resolved.

Young’s attorney concluded in the statement that he and his family are “grateful for those who continue to organize and protest to change the system that remains unjust where ‘Black Lives” are concerned,” and that they will not stop “demanding justice for Messiah, Taniyah and all of the victims of police violence.”