When taking a trip down memory lane, seeing your favorite team play or going to a concert with friends or family stands out among the best of times.

These are crucial moments, especially as a kid. While these experiences are important, not all families have the means to buy tickets to see the Atlanta Hawks or visit the Atlanta Botanical Gardens.

Husband and wife duo Brian and Susan Banner saw this need in Atlanta and sought to address it by co-founding the Atlanta chapter of Most Valuable Kids.

Most Valuable Kids (MVK) collects unused tickets to local sports and cultural events, like a trip to the theatre or museum, and distributes them to youths in underserved parts of the city.

Susan, now director, learned about the nonprofit in the early 2000’s and, after wanting to get involved for years, she and Brian started Most Valuable Kids of Greater Atlanta in 2017.

“I didn’t understand at first when Susan was telling me about [MVK], why it was so important. I started to realize later in my corporate career that I was given a lot of tickets to go to a lot of events, so I got to see lots of things and never even had to pay,” Brian said. “Then, I started seeing all the empty seats and all the people that don’t appreciate the tickets as much… So, kids who really, really would appreciate it, why shouldn’t they have a chance?”

Since 2017, MVK Atlanta has distributed 27,100 tickets to local landmarks and events.

MVK’s offerings would entice a kid with any range of interests — including an outing to the World of Coca-Cola to try all 60+ flavors, a trip to see Atlanta’s sports teams or a visit to the historic Fox Theatre. 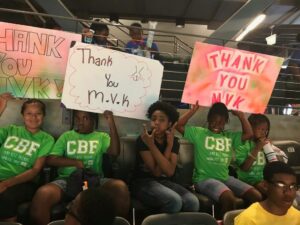 The Atlanta chapter’s first outing was the WNBA’s Atlanta Dream game at Georgia Tech. Sixty-four tickets were donated through Emory Healthcare, which MVK Atlanta distributed to a local Boys and Girls Club.

From that first event, the Banners knew they were helping make a positive impact.

“There was a middle school-aged girl, and she had never been to a basketball game and had never been on a college campus,” Susan said. “[That day], she went home, and said, ‘How can I go to Georgia Tech?’”

Since then, the positive feedback just kept coming.

One kid set the scene for the recent Magic vs. Hawks game they attended, where they landed a spot on the jumbotron and saw a couple get engaged — a very exciting day. They wrote: “The best moments weren’t in my pics because I was yelling and having a blast,” and signed off by adding, “I felt very important, blessed and lucky!”

But when COVID-19 struck, the team had to rethink how to provide access, a key concept in their mission statement, to youth in the Atlanta region.

To help provide aid where it was needed most, MVK Atlanta worked with local outreach organizations to distribute food, books and hygiene packs to local families. Since May 2020, the team has distributed 6,200 books and 1,000 hygiene supplies.

The team also continued their work with Souper Jenny’s Zadie Project, which has donated 10,600 quarts of soup to MVK Atlanta for distribution since 2018.

The nonprofit will continue these outreach efforts, but now that the city is in various stages of reopening, ticketed events are available again.

Individuals and organizations alike can donate their tickets to the nonprofit. From there, approved recipient agencies are notified of the available tickets, which are collected on a first-come, first-serve basis. The recipients include local schools and youth development organizations, which distribute the tickets among their youth.

Tickets must be donated in pairs so an approved chaperone can join the festivities.

Major ticket donations come from the Atlanta Hawks, the Alliance Theatre and Broadway in Atlanta, which helps secure 100 tickets per show at the Fox Theatre. 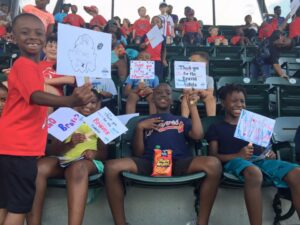 Sundays with the Braves is a tradition for MVK. (Photo courtesy of Most Valuable Kids of Greater Atlanta)

Another mainstay on MVK Atlanta’s calendar is Sundays with the Atlanta Braves. A local donor grew up going to see the team’s games on Sundays with his family, and he told Susan, “I would love to see kids in the stands on Sundays.”

So for every Sunday home game, 40 to 50 tickets are reserved for MVK’s kids.

Brian added that sports games are always fun to attend, but events that get less TV coverage like theater and musical performances can help extend the kids’ worldview.

“It’s an inspiration for some of these kids when they go, they see it and they see that there’s something else out there,” he said. “One of those kids, one day is going to end up being in the show because they went to it, they experienced it, felt moved inside and that’s what they want to do.”

After seeing an Atlanta Hawks game, seven-year-old Nikolas wrote the MVK Atlanta team a thank you note, saying: “I have never been in a game before, and I really like it. I had so much fun. I didn’t know basketball was so fun.”

His parents added: “My son Nikolas has been having a tough time lately, and it was so great to see him enjoy and laugh tonight. It’s so wonderful what y’all do, we don’t usually have the means financially to do something like this with our kids so thank you so much for giving us that opportunity, it means the world to all of us!”

MVK of Greater Atlanta is looking to expand its efforts and encourages local organizations who are interested in donating tickets or becoming a sponsor to apply.