Tremendous scientific advances in the tracking of birds are now so commonplace that they were barely mentioned in a recent release from the state Department of Natural Resources about a new tracking program. 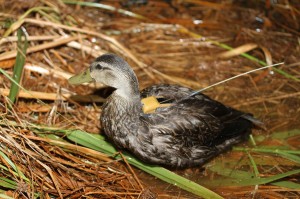 This mottled duck is outfitted with a satellite transmitter to track its feeding patterns and movements, in order to protect its habitat. Credit: Robert Horam, Ga. DNR

It was just in 1984 that a bald eagle in the U.S. became the first bird to be outfitted with a satellite tracking device. That was a huge advance from the piece of string that James Audubon tied a string on the leg of a bird in 1803 to see if it would return after the autumn migration. (It did.)

These days, satellite telemetry is so common that mottled ducks along Georgia’s coast are being outfitted this fall with transmitters. The solar-power devices will gather GPS location information from Air Force satellites and transmit it back to researchers.

It goes without saying that the GPS navigational system has advanced to the point that it’s a common feature in smart phones and trackers used in jogging and cycling.

GPS is operated by the U.S. Air Force and the system now includes more than 30 satellites circling the globe more than 12,000 miles above Earth’s surface, according to a video produced by Boeing. On Aug. 1, the Air Force launched its seventh GPS Block IFF satellite, which was third such satellite to be launched this year, according to gps.gov. 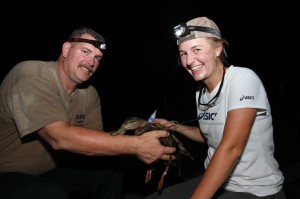 The ultimate objective of the research program is to help preserve and protect the mottled ducks. Potential conservation areas can be identified and management schemes devised to create a habitat that nurtures the mottled ducks. Loss of wetland habitat has led to decreased populations, according to the Cornell Lab of Ornithology.

Georgia’s duck researchers want to know where the birds eat breakfast, where they sleep and where they go during the day.

“Mottled ducks are a relatively new species to the Georgia coast, only having been established here since the late 1990s,” Greg Balkcom, a DNR wildlife biologist said in the statement. “Their population is concentrated along the mouth of the Altamaha River, and has remained stable for several years, but we still don’t know enough about their habitat preferences and movement patterns to effectively manage coastal impoundments to meet their needs.” 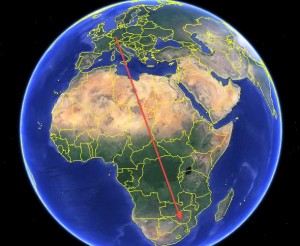 A fascinating account of a female falcon’s migration from Germany to Zimbabwe and back again, as tracked by satellite telemetry, is cited in a European study: