‘My Salinger Year’ – a lightweight movie based on J.D. Salinger’s literary agency

A scene from "My Salinger Year"

Sweet-natured and lightweight, about all “My Salinger Year” can really be accused of is squandering an opportunity.

Based on Joanna Rakoff’s 2014 memoir, the movie is about, well, the year she spent at a tony literary agency in New York where she answered fan mail for its toniest client, J.D. Salinger.

The year in question is 1995, and while her workplace may have a burnished history, it won’t have much of a future if the bosses don’t learn how to use a computer. (Cue the Luddite jokes). 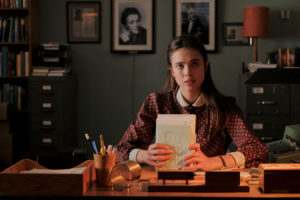 A scene from “My Salinger Year”

However, these time-out-of-joint tech jabs are only a subtext for the central story: that of Joanna (Margaret Qualley), a starry-eyed would-be poet, and how her apprenticeship as an editorial assistant to high-powered agent, Margaret (Sigourney Weaver), teaches her a lot more than how to get a poem published in the Paris Review (actually, she’s already published two).

In the first scene, she (and we), learn that the last thing editors, publishers, literary agents, etc. want is anyone with authorial aspirations. Joanna is there to type up notes, shred unwanted correspondence and, most importantly, answer the fan mail addressed to the author of “The Catcher in the Rye,” “Franny and Zooey,” etc.

A celebrated recluse, Salinger hasn’t published anything in decades, and, as Margaret assures her new hire, has zero interest in replying personally to all the heartfelt letters, interview requests, invitations to give commencement speeches, etc. that continue to come his way. In fact, the last time he bothered with that stuff was 1963; the agency has kept his replies in a crumbling file folder as a template on which to base his more recent “correspondence.”

Okay, Jerry is sacrosanct. But the poet – the human? – in Joanna makes this deception difficult. Before long, she’s answering the missives personally.

All this sounds like a delicious set-up for a kind of “The Devil Wears Prada,” literary-style. But while Qualley is as engaging in her way as Anne Hathaway’s beleaguered assistant, and Weaver has already shown us that when it comes to very bad bosses, she can walk the walk, talk the talk and sniff just as imperiously as Meryl Streep (Check out Weaver’s Oscar-nominated turn in “Working Girl”), “My Salinger Year” lacks the bite and specificity of the earlier film. 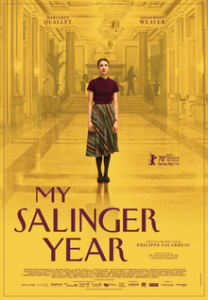 Perhaps Jimmy Choo simply makes a better target than J.D. Salinger.  Still, there’s a scattershot approach that tries too hard to cover too many things, from Joanna’s stalled poetry career to her finally getting a chance to meet the legendary author.

And her floundering relationship with her self-satisfied new boyfriend is especially annoying; not only does it take too much time on a pre-ordained outcome, but it takes us away from literary agency where the real action is.

“My Salinger Year” can be so muted and occasionally misguided that it took me a good hour before I realized Qualley is the same actor who played the flirtatious hippie chick who almost stole ‘Once Upon a Time in Hollywood…” from both Brad Pitt and Leonardo DiCaprio. She’s an innately appealing presence and someone you want to see in more movies. But let’s make them movies in which she has something to do other than, well, be appealing.