An entrance to the former Nabisco factory at 1400 Murphy Ave. (Photo by Atlanta Preservation Center.)

As Southwest Atlanta’s historic Nabisco factory comes down, community and historic preservation groups are nearing some small victories in the emerging redevelopment plan — though smaller than they originally hoped.

Prologis, the logistics company remaking the 32-acre site at 1400 Murphy Ave. for a 2024 opening, says the project will be two industrial buildings, not the mixed-use complex several community groups called for. But a community wish-list item of better connections to the nearby Oakland City MARTA Station is still in discussion.

And hopes of saving the historic facade and Art Deco lobby have fallen through, but some lobby “relics” are headed to Georgia Tech for reuse in some campus buildings. 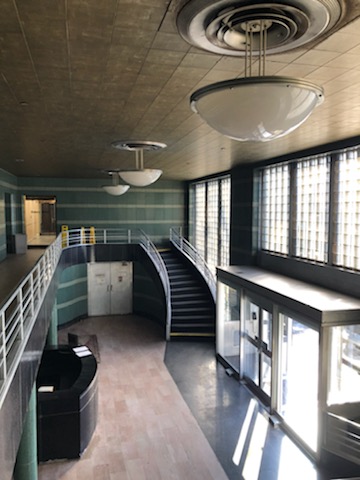 The Art Deco lobby of the former Nabisco factory, which had remained virtually untouched since its 1941 opening, as it appeared in February 2022. The lights, some windows and some tiles and pillars will be donated to Georgia Tech for reuse. (Photo Courtesy Atlanta Preservation Center.)

Nabisco is a snack company known for such iconic products as Oreo cookies and Ritz crackers. Then called the National Biscuit Company, it built the Murphy Avenue factory in 1938 and opened it in 1941 as one of its cutting-edge “Bakeries of Tomorrow.” Nabisco is now a subsidiary of Mondelez International, which shuttered the factory early last year in a high-profile move that eliminated 400 jobs. California-based Prologis bought the property late last year for around $22.5 million and said it plans a $50 million remake.

Prologis specializes in operating logistics and warehouse centers for a wide variety of companies. In February, a number of community groups from Capitol View, Oakland City and Sylvan Hills issued a letter calling on the company to create a high-density, mixed-use project with historic preservation and pedestrian-friendly elements. Talks have continued since then.

But the company is moving ahead with a warehouse and logistics concept, spokesperson Mattie Sorrentino confirmed to SaportaReport this week. She said it will consist of “two modern, light industrial buildings, with EV [electric vehicle] charging available.” The company also aims to have the buildings attain an industry energy-efficiency standard called LEED Silver.

“We have engaged MARTA and are working on a plan to create connectivity between the development and the Oakland City station,” added Kent Mason, the company’s local market manager, in a written statement. Stephany Fisher, a spokesperson for the transit agency, would only say, “MARTA continues to participate in the overall discussion as a community stakeholder.”

Neighborhood Planning Unit X was among the local organizations pressing for the mixed-use concept. “It’s all fallen through, sadly,” said NPU-X chair Zachary Adriaenssens. “They do not appear willing to change plans at this point.”

Adriaenssens added that another meeting between the community and developers was scheduled for this week. He said he understands that Keyetta Holmes, director of the City’s Office of Zoning & Development, “has been trying to push them to go mixed-use at least…” A Department of City Planning spokesperson declined to comment. 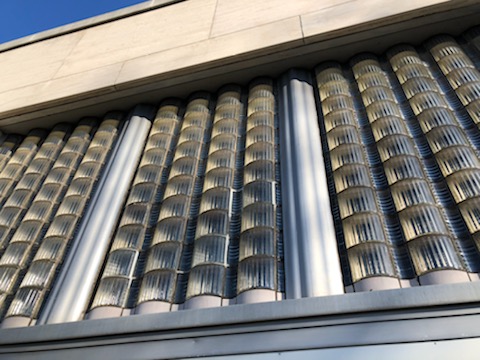 Part of a window of the former Nabisco factory that will be donated to Georgia Tech for reuse. (Photo Courtesy Atlanta Preservation Center.)

Then there’s the historic preservation element. The nonprofit Atlanta Preservation Center (APC) took the lead in an attempt to save the facade and lobby. One thought was the lobby could house a mini-museum about Nabisco as well as a tribute to labor union activism there, such as a 1972 wildcat strike by Black workers that changed some racist and sexist factory policies. Labor union history tributes are rare in Atlanta.

The company and the APC now say that on-site preservation is not possible. “This effort has been a unique challenge and pressed with a myriad of obstacles,” said APC Executive Director David Yoakley Mitchell. “The complexity of a structure zoned industrial and the constant difficulty of security brought on by consistent trespass made the pursuit of recovery of specific architectural artifacts the path forward.”

Mitchell and Mason said that various lobby items — or “relics,” as Mitchell calls them — are being donated to Georgia Tech to be added to new and expanded campus buildings. Those items include three light fixtures, a block of shaped glass from a window, tiles and pillars. The lobby is already largely demolished at this point.

“We’re excited to see the pieces installed on the campus and look forward to continuing to partner with the city and community organizations where possible,” said Mason.

The effort is being coordinated by Danielle Willkens, a Georgia Tech architecture professor who is also a member of the APC’s Board of Trustees. Willkens said she expects more details to be available after a meeting scheduled for this week. The effort, she said, will include the Lifecycle Building Center, a Murphy Avenue nonprofit that deals in donated and refurbished materials.

As for a commemoration of Nabisco or union history, Mitchell said he believes a way will be found to do it, though it remains unclear whether that would be on-site or elsewhere. He said APC “will also work to make sure that some of the various historical occurrences that happened are also remembered by working with the community.”