A rendering of the West Wing addition to the National Center for Civil and Human Rights (Special: NCCHR)

Atlanta is close to realizing its initial dream for the National Center for Civil and Human Rights.

On Oct. 14, the Center will break ground on a major expansion of the unique attraction in downtown Atlanta. The night before, the Center will hold its annual “Power to Inspire” awards dinner.

The goal is for the expansion to open in June 2024 — the 10th anniversary of when the Center originally opened in June 2014.

Although the Center is still raising money, it already has received enough pledges to build an expansive West Wing, which will be named after Arthur Blank or his family or foundation. The Blank Foundation provided a $17 million gift towards the Center’s expansion — $15 million for capital expenses and $2 million for program enhancements — in February 2021.

The West Wing will house a family gallery in an attempt to attract younger visitors and their families already in the vicinity visiting the Georgia Aquarium, the World of Coca-Cola or the Children’s Museum.

In a press interview, Arthur Blank said the Center currently isn’t designed to attract children under 12. 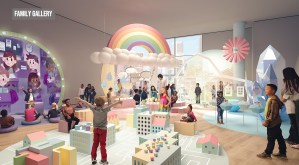 A rendering of the planned “family gallery” of the National Center for Civil and Human Rights. (Special: NCCHR.)

“It’s very important for our young folks to get that message as early in life in an appropriate way so they can understand it,” Blank said in a zoom interview. “Our young folks, our children are not born with any of those kinds of nuances and prejudices in their brains.”

“The family gallery is going to be about raising good citizens,” said Savitt, adding that it will be an interactive exhibit with five islands that will include group play.

The vision for the Center over the next five years will be to broaden the scope from being primarily an Atlanta attraction to becoming a national cultural rights institution.

Blank, a co-founder of the Home Depot and the majority owner of the Atlanta Falcons, said the fact that the Center is located in Atlanta is important for obvious reasons given that the city was home to Dr. King and so many other civil rights icons, including former Atlanta Mayor Andrew Young and former U.S. Rep. John Lewis.

Blank said the Center’s resources and offerings will now “be shared really on a national basis,” and that he wouldn’t be surprised if its reach will go “beyond the borders of the United States.”

The capital campaign will include refreshing current attractions. 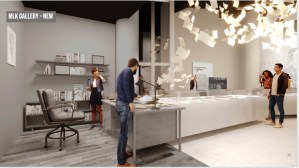 A depiction of the new King exhibit after the expansion of the National Center for Civil and Human Rights. (Special: NCCHR.)

To better serve existing demand, the Center will double the number of seats at the lunch counter, where visitors put on headphones while placing their hands on a counter. Visitors then are able to experience the anger and wrath that protestors received when they were trying to integrate eating establishments in the South in the 1960s.

The special exhibit area that honors Martin Luther King Jr. also will be expanded and made more inviting. For example, visitors will be able to sit at a replica of King’s desk in his office — likely to be a composite of his various offices. The King exhibit will continue to display papers and artifacts that were part of the King collection Atlanta was able to secure for $32 million before Sotheby’s sold them to the highest bidder. The exhibit will continue to be refreshed and changed every six months.

For Blank, the expansion will continue to help Atlanta learn about King’s “beloved community,” providing an aspirational goal for the city and beyond.

“It’s a great Center. It’s a great story. It’s a great, great message for all of us to be reminded of — what our opportunities are in our lives, both in our homes and in our places of work and places of faith and whatever it may be so we can make a difference in the lives of other people,” Blank said. 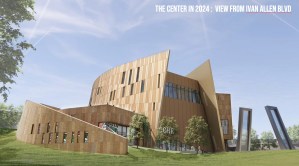 A rendering of the proposed East Wing of the National Center for Civil and Human Rights. (Special: NCCHR.)

The capital expansion originally had been expected to cost $38 million, and the Center has raised more than $27 million in pledges and commitments toward that goal. But because of price increases, Savitt said the project costs are now projected to need an additional $10 million.

The expansion plans also envision the building of a new East Wing, which will increase classrooms, conference and meeting spaces so the Center can become even more national in scope. But Savitt said the campaign will need to raise the additional funds before the Center can decide whether to build the East Wing as part of the current expansion plan.

“We are not going to take on any debt,” Savitt said. “We have enough [money] now to build the West Wing… There’s a moment in which you either start the East Wing or you don’t. We’ve been told that’s around February 2023.”

Savitt said the Center needs to raise another $20 million in order to complete both of the new wings. The Center has identified potential donors for between $10 million and $15 million toward the revised goal.

“The question is can we find that last 5 million between now and February,” Savitt asked rhetorically. “I feel very hopeful that it’s going to come in. People have been incredibly generous. And there are some long-standing donors who have said they’re going to give.”

The Center also is offering a multitude of naming opportunities for companies and donors that are interested in having the naming rights for various galleries and exhibits. 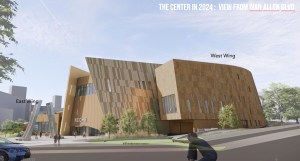 Another view of the proposed expansion of the National Center for Civil and Human Rights. (Special: NCCHR.)

The current expansion plans actually will help realize the original dream for the Center. Because of the Great Recession, the original design for the Center had to be scaled back. But leaders of the Center, including former Atlanta Mayor Shirley Franklin, who chairs the Center’s board, always wanted to build out the entire concept as soon as feasible.

For Blank, the Center’s teachings can help bridge the divides that currently exist, which he said has never been more important than now.

“We should focus on those things that bring us together and acknowledge like an orchestra how each piece of a band or orchestra brings beautiful music,” Blank said.  “It’s a matter of allowing each instrument to play to its fullest, and when we do that, we create this beautiful music of life.”