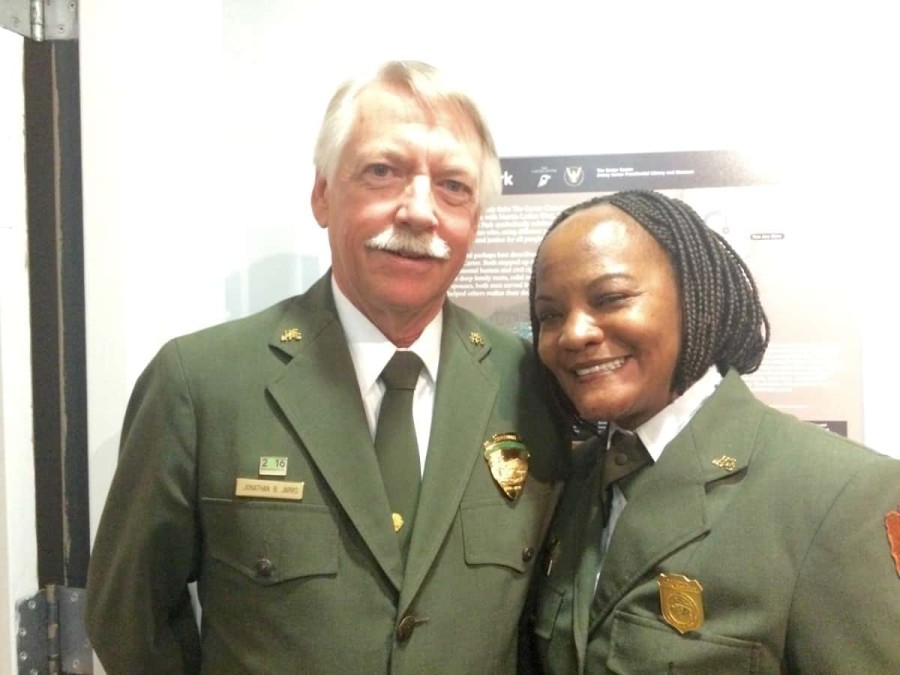 An axis of peace. That’s probably the best way to define the relationship between two of Atlanta’s greatest leaders and their families – the late Martin Luther King Jr. and former President Jimmy Carter.

It is a special multi-layered relationship that keeps building upon a shared foundation of non-violence, human and civil rights. And both MLK Jr. and Carter were awarded the Nobel Peace Prize for their efforts. 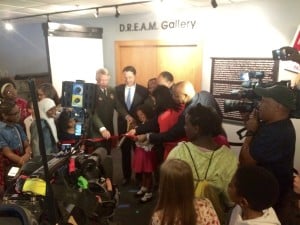 The National Park Service has recently opened an exhibit called the Georgia’s Global Peacemakers – tracing the relationship between the two leaders, who both have planted their legacies in Atlanta.

The Marin Luther King Jr. National Historic Site is along Auburn Avenue and encompasses the MLK birth home as well as the historic Ebenezer Baptist Church. The national site museum is directly across from the King Center and the crypts where MLK and his wife – Coretta Scott King – are buried.

The Carter Center and the Jimmy Carter Presidential Library are located about one mile east of the King Center, and the connecting link is called the Freedom Park – physically linking the two centers and the two legacies of the Peacemakers.

“It is about time to bring those two legacies together,” said Judy Forté, superintendent of the MLK Jr. National Historic Site, as she went on to call King and Carter “two great leaders of change.”

Often times, Atlanta does not fully appreciate or capitalize on its unique history when it comes to human and civil rights.

“This is one of the only places in the world with two Nobel Peace prize winners,” Atlanta City Councilman Kwanza Hall said at the opening of the King-Carter exhibit. “We want to see this place continue to be developed and built on.”

The National Park Service unveiled the exhibit as part of its own Centennial celebration – an event that brought Jonathan Jarvis, the director of NPS, to Atlanta on April 18. He had just been to Plains to name Carter as an honorary park ranger. 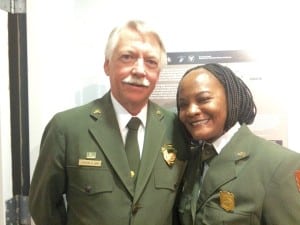 Jarvis, speaking to a group of Atlantans at the opening of the exhibit, said that our national parks are not only “really cool places,” but they also stand for ideas.

“We are stepping up to our responsibility,” Jarvis said. “We want to use these places as a way to help inspire our nation – that all men are created equal.”

He also said that 10 percent of the national parks in America were created under President Carter’s four-year term. “Today we want to tell the story of these two extraordinary individuals.”

Later, in an interview, Jarvis explained that the National Park Service is “in the perpetuity business – we are here forever.”

The significance of that statement is multi-fold – and it speaks to the “multi-generational family” relationships between the Carter family and the King family.

Yolanda Renee King, the only grandchild of the late Civil Rights leader, actually cut the ribbon of the exhibit as her parents – Martin Luther King III and Arndrea King looked on.

Jason Carter, the grandson of the former President, also attended.

“I’m honored to be a part of this and for my family to be associated with the King family,” the younger Carter said.

In many ways, the younger Carter was understating the critical role that his family is continuing to play with the King family.

The former president and his grandson have been working to mediate an agreement between the three surviving King children – MLK III, Dexter King and Bernice King, CEO of the King Center – seeking to end years of legal and financial conflicts over use of their parents’ legacies. 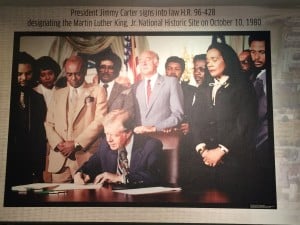 The exhibit has a photo of President Carter signing legislation on Oct. 10, 1980 designating the Martin Luther King Jr. National Historic Site as Mrs. King looks on (Photo in exhibit)

If the King children ever decide to sell the King Center, there is a general understanding that the National Park Service would be first in line to acquire the assets, perhaps with some help from private funds.

While people close to the King family have said the siblings are closer than ever to reaching a settlement and a “grand compromise,” it is not known whether that would involve turning over the King Center and other key items owned by the family to NPS.

The family has both for-profit entities – King Inc. and Intellectual Properties Management – as well as its nonprofit legacy – the King Center, and finding amenable solutions for every one and every issue involved likely requires the skills of President Carter and his grandson, a lawyer who is chairman of the Carter Center’s board of trustees.

But it also is another bond between the two families – one that dates back five or six decades.

The exhibit includes a video interview between Bernice King and President Carter – where the two of them talked about symbiotic relationship between the King family and the Carters.

Although Carter never got to know MLK Jr., he did become quite close to his father – Daddy King and to his widow – Coretta King. Daddy King was instrumental in Carter getting support from African-Americans when he was running for president. And Carter has said he never could have been elected president had it not been for the Civil Rights Movement.

As Jason Carter said, the movement made it okay for his grandfather to say he was from Georgia.

When he was president, Carter added 39 national parks, including the King historic site.

“We more than doubled the size of the parks,” the former president said in the video to Bernice King. “I was with your mother when we announced I was going to do this.”

Over the years, the Kings and the Carters have supported each other on their various initiatives. When Carter won the Nobel Peace Prize in 2002, Mrs. King attended the dinner in his honor. 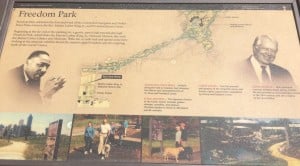 The decision to build a Center for Civil and Human Rights was based largely on the contributions by King and Carter. In the video, Carter said he has never seen a real difference between human rights and civil rights. He said he considered it “a basic human right is to live in peace.”

It would be the ultimate gift to Atlanta if the Carters can help make peace among the King siblings and develop a long term solution for their parents’ legacies – including the King Center. And it would be even more incredible if there would be a way for the King Center to become the responsibility of the National Park Service so it could be enhanced and maintained for perpetuity.

When asked if the NPS exhibit of Carter and King could be a sign of things to come, Jarvis simply answered: “We hope so.”